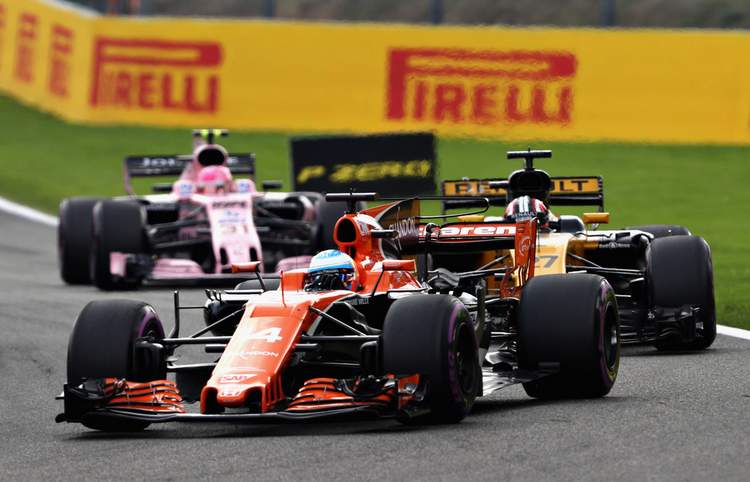 Fernando Alonso blitzed off the line the moments the lights went out to start the Belgian Grand Prix, the Spaniard muscling his way up to seventh in the opening laps, but it was a short-lived cameo on an afternoon he spent going backwards, until the team retired the car after 25 laps.

Shortly after claiming seventh place withing the first four laps, things started going pear shaped for the McLaren driver as a string of cars passel him down the Kemmel Straight and Blanchimont.

At which point he shouted in exasperation to his team over the radio: “Embarrassing, really embarrassing.”

A lap later his engineer informed him of where he was in the order and he replied, “I really don’t care too much about the gaps. This is just a test.”

On lap 17 his engineer was back on the radio proffering settings advice to which Alonso said, “No more radio, the rest of the race.”

Then shortly before retiring from the race, the Spaniard himself broke the radio silence, “Every car I overtake, they pass me on the next lap. I have no protection now… anyway, it doesn’t change my life.”

After his race was over, Alonso was back in PR mode when he summed up his day to the media, “In general, it’s been a good weekend. We played a good team game in qualifying, we had a great start – taking the outside lane was the right decision – and we were seventh after the first lap.”

“It was fun for the first three or four laps! Then we tried to defend our position, but in the middle of the straights some cars passed us without even activating the DRS. The situation is what it is and we need to improve it as soon as we can. I know the team is working day and night improving the car, and we hope we can see the results soon,” added Alonso.

Reports have emerged this weekend suggesting he is in advanced talks with a deal to join Williams next year, while a return to Renault has also featured among the speculation surrounding the double F1 World Champion.

What Alonso has made clear is that he will not countenance another season with McLaren-Honda under the current conditions and will make a decision on his future next month..