Rosberg: Alonso not unlucky he just made bad decisions 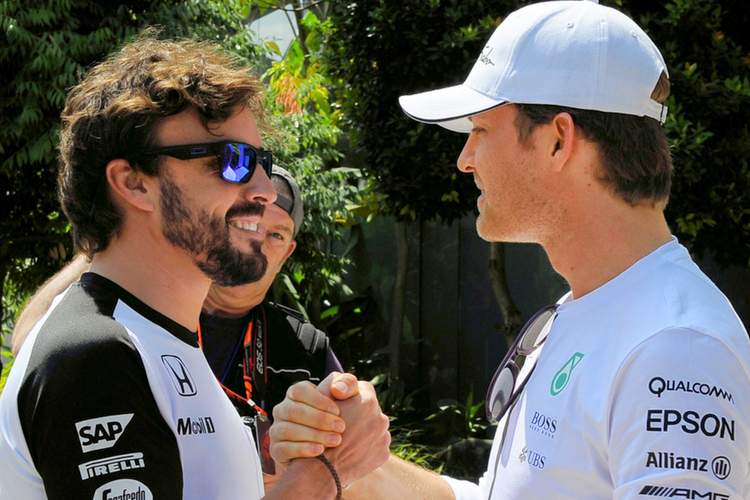 There is a school of thought in the Formula 1 paddock suggesting that Fernando Alonso has been dogged by bad luck with regards to his career, but reigning F1 world champion Nico Rosberg scoffed at the idea and says that the Spaniard has only himself to blame.

Speaking to AS, during the Japanese Grand Prix, Rosberg was asked if he felt that Alonso was unlucky, to which he exclaimed, “What bad luck is he talking about?”

“It’s not bad luck, it’s just bad decisions and making the wrong choices. Choosing bad teams is not bad luck. You cannot say that, because you have to plan well and ensure you have the car to win. That’s part of being a driver, you can be the best driver in the world, but if you are always in a bad car you cannot win. That’s how it is.”

Alonso’s early career promised so much as he claimed the 2005 Formula 1 World Championship in what was only his fourth year as a full time driver on the grid. He made his debut with Minardi in 2001, but in 2002 he sat on the sidelines as a Renault reserve.

A year later he was promoted to the Renault team and won his first grand prix win in Hungary that season.

He followed up his 2005 world championship title triumph with another one in 2006 also with Renault.

Thereafter, in 2007, the rot – in terms of choices – set in as he moved to McLaren and was embroiled in a year long bitter battle for superiority with rookie (at the time) Lewis Hamilton, which in tandem with the scandalous Spy-Gate affair, in which Alonso played a role, which ultimately cost the team $100 million.

He departed the Woking outfit, at the end of the season, returning to Renault where his manager Flavio Briatore was the boss.

After a couple of fruitless years with the French team, he signed with Ferrari for 2010. The partnership promised much and indeed he won his first race in Red. He also came desperately close to winning the title that year but was thwarted by a strategy blunder, at the season finale in Abu Dhabi, which handed the championship to Sebastian Vettel.

The Red Bull driver went on to dominate the next three years with Alonso more often than not best of the rest, but never really getting another shot at the title.

The Ferrari spell came to an end as relationships disintegrated beyond repair and a new management cabal led by Sergio Marchionne took over at Maranello from the long standing boss Luca di Montezemolo. By now Alonso’s reputation as being disruptive and divisive to teams was well established.

In 2015 the Spaniard made his way to the ‘reborn’ McLaren-Honda outfit, which also promised so much but in the end delivered three years of misery. Ironically, including a change of the guard as long time team supremo Ron Dennis was sent packing and a new regime ensconced at Woking under the leadership of Zak Brown.

The facts are that it is a dozen years on from Alonso’s first championship title. He last scored a grand prix victory in 2013. It has been meagre pickings since then, and now he is 36 years old.

Right now Alonso is at another major crossroad in his career: his options are to depart Formula 1 and ply his trade in Indycar or WEC, where by his own admission he has attractive offers, or to continue in Formula 1 with McLaren who have ditched Honda to be a Renault customer team next year.

In the light of this, Rosberg was asked if he believes McLaren and Honda will succeed, “Well, I think it can be a good partnership where they can help each other and get good results. I think they will fight for podiums… at least I hope so.”

As for Alonso’s options, including Indy, Rosberg added, “McLaren-Renault is his only option. Indy is not Formula 1, and Formula 1 is Formula 1 – the maximum.”

Big Question: Has Fernando made bad decisions or is he a victim of bad luck?