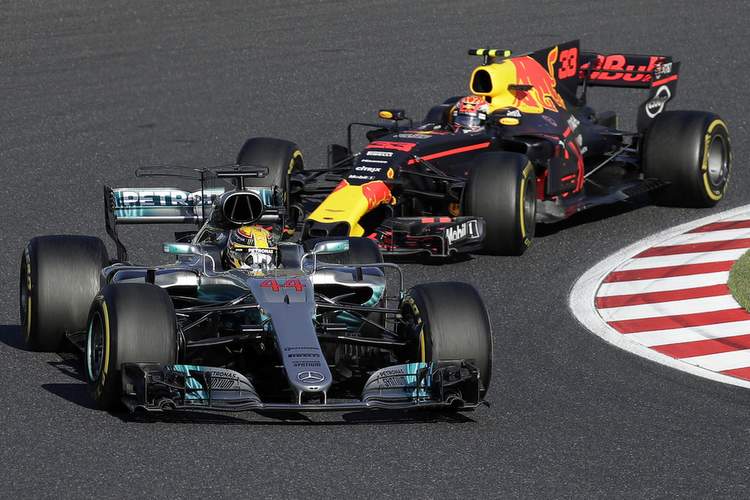 Lewis Hamilton was made to sweat in the final stages of the Japanese Grand Prix, but hung on to claim victory while title rival Sebastian Vettel retired his Ferrari five laps into the race and as a result is now 59 points adrift of the Mercedes driver with four races remaining.

Behind Hamilton the Red Bull duo were on the podium again with Max Verstappen in second, challenging hard for the win during the final laps, and Daniel Ricciardo in third, celebrating on the Suzuka podium for the first time in his career.

Hamilton, who qualified on pole a day earlier for the first time in his career at Suzuka, made a strong start and that’s where he stayed. Along the way there was a Safety Car period and a couple VSC periods, but he managed to control proceedings until a few laps from the end when he complained about vibrations.

The soft tyres on the Mercedes were fading fast and at the end Hamilton was clearly in some trouble, at this point Verstappen got a sniff of victory and pushed hard, but lapping Fernando Alonso and Felipe Massa the Dutchman lost time and had to settle for second.

Hamilton, who can claim his fourth world championship title at the next race in the United States, said after his eighth win of the season, “Max drove an outstanding race and honestly it wasn’t an easy one for us at all.”

“The Red Bulls just seem to be rapid in the race trim. Obviously we’re quick in qualifying but it got very close at the end with the VSC and the restart. The tyres were cold and had a bit of traffic and he caught right up, so it was very close. Honestly, I could only have dreamed of having this kind of gap.”

“The Ferraris have put on such a great challenge all year long but I have to put it down to my team. They’ve done a phenomenal job, reliability has been on point. They’re just so meticulous and that’s really why we’re having the reliability and results we’re having,” added Hamilton.

Verstappen summed up his afternoon, “It was a great day again. Suzuka is really great to me, I loved the track last year. The pace today was really promising. The first stint on the supersoft I was struggling a bit with the left-front but as soon as we switched to the soft tyre is was very competitive.”

“I was always with Lewis, especially in the last few laps. We had great pace it’s just really hard to pass. I gave it my all to try and close the gap but the car is really improving race by race so I’m really happy about that.”

Ricciardo was third, almost ten seconds down on his Red Bull teammate, his ninth podium of the season.

The Australian said afterwards, “This is my first podium here. It feels great. It is a circuit I have always enjoyed and with this year’s cars it is lot of fun. After the start the race spread out and it wasn’t much fun for me but then I had Valtteri coming at the end so to have pressure at the end was good.”

Valtteri Bottas was fourth, the Mercedes driver struggling to match his teammate all weekend, but he did come good in qualifying a day earlier. At the end of the race he was fourth, finding some pace late in the race to challenge Ricciardo but in the end to no avail.

Kimi Raikkonen salvaged some Ferrari pride by claiming fifth place after starting 11th on the grid. The veteran Finn managed to stay out of trouble and make his way through the field without much fuss.

Esteban Ocon had a strong race, running third early on, finishing sixth ahead of Force India teammate Sergio Perez in seventh. The Mexican told to hold station when asked if he could attack the Frenchman.

It was also a double points score for Haas with Kevin Magnussen and Romain Grosjean finishing eighth and ninth. Felipe Massa claimed the final point for Williams with tenth place on the day.

Carlos Sainz was an early casualty, losing control in the Esses on the opening, his last race with Toro Rosso ending prematurely and in the gravel.

The man he will replace at Renault, Joylon Palmer finished what is likely to be his final Formula 1 race in 12th.

Long before the finish of the race, Vettel told reporters, “It’s like that sometimes and of course I’m disappointed, but now it’s important to get some rest and give my all for the last four races and see what happens. We still have a chance this year.”

At the start Hamilton got away well to hold his lead. Initially Vettel too looked to be in good shape but early in the lap he was pounced upon by a hard charging Verstappen. The Dutchman had made an excellent start from P4 to pass team-mate Ricciardo and then at the hairpin he powered past Vettel.

There followed a brief safety car period as Sainz’s Toro Rosso remained beached in the gravel trap at Turn 7 after a lap one off and when the action resumed again Vettel was again under attack sliding to eighth place behind the second Force India of Perez and the Williams of Felipe Massa.

Clearly something was wrong with Vettel’s Ferrari and within moments the German’s race engineer was on the radio to call him in to retire the car.

At the front Hamilton was beginning to build a lead over Verstappen and by the time the Virtual Safety Car was deployed when Ericsson crashed out at Degner 2 on lap 8, at which point the Mercedes driver was more than four seconds clear of the Red Bull man.

Ocon’s grip on third place only lasted until lap 10, when the VSC was removed. Ricciardo closed on the pit straight under DRS and powered past the Force India on the left-hand side on the approach to Turn 1.

Bottas, too, managed to get past the Frenchman and by lap 13 Hamilton lead from the Red Bulls, Bottas, the Force Indias of Ocon and Perez and seventh-placed Massa.
Räikkönen was in P8 in the remaining Ferrari, ahead of Renault’s Hulkenberg and Haas’ Kevin Magnussen.

Verstappen was the first of the frontrunners to pit, with the Red Bull driver taking on soft tyres at the lap of lap 21. Mercedes reacted and brought Hamilton in at the end of the next tour. When they both crossed the line the next time around, the gap between them had shrunk to just 1.8s and Verstappen was setting purple lap times.

Ricciardo then made his stop at the end of lap 25, though his stop for soft tyres looked a little slow. He rejoined behind Raikkonen who, like new leader Bottas, was still circulating on his starting soft tyres.

Bottas, however, was now running slowly, in the 1m37s bracket, and as a consequence he began to back Hamilton towards Verstappen and on lap 28 the deficit was just 1.1s. Hamilton was quickly on the radio to voice his concern and a few corners later Bottas allowed the Briton to sweep past.

The Finn then dropped back to frustrate Verstappen for the next few laps until Mercedes called him to the pits at the end of lap 30. Bottas emerged from his pit stop with fresh supersofts, in fourth place and 10s behind Ricciardo.

At the front Hamilton was now three seconds clear of Verstappen but already the Mercedes driver was saying he was struggling with rear tyre grip.

Verstappen closed to within 2.5s and there the race for the lead stalled with Hamilton apparently able to control the gap comfortably.

Behind the top two Ricciardo’s pace began to flag and slightly and Bottas, on supersoft tyres compared with Ricciardo’s softs, began to close on the Australian.

On lap 48 the Finn had shortened a 10 second gap to just 2.8s, but then Stroll suffered a failure of sorts on his Williams. The Virtual Safety Car was again deployed and the speed limit in force bought Ricciardo valuable time.

However when the action resumed Bottas applied the pressure with a race fastest lap to almost get within DRS range of the Red Bull driver.

Further ahead Hamilton was hitting traffic and that allowed Bottas to close in on the lead. However, the Dutchman was denied any opportunity to attack the Briton as Alonso’s McLaren came between the leaders on the penultimate lap.

The Spaniard was put under investigation for ignoring blue flags, but Verstappen’s chance was gone and he had to settle for a second consecutive P2 in Japan.

Behind them Ricciardo managed to hold third ahead of Bottas, while fifth place when to Räikkönen in the sole remaining Ferrari.