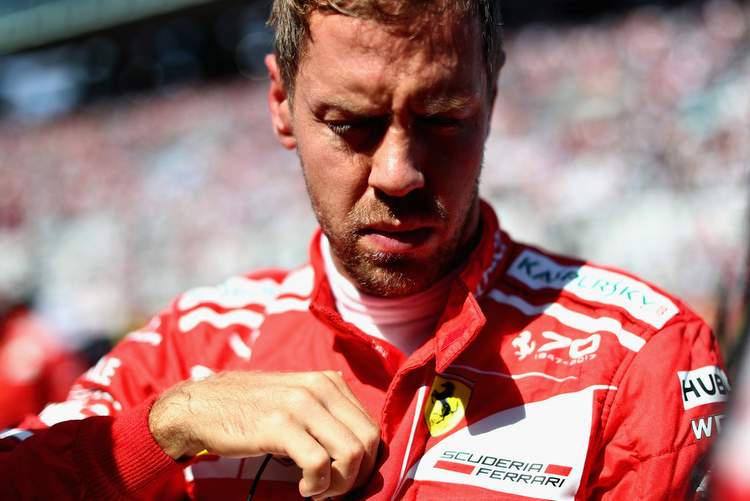 Ferrari have blamed a faulty spark plug as the reason Sebastian Vettel dropped out of the Japanese Grand Prix on lap 5 and with it his 2017 Formula 1 World Championship bid has all but ended.

It was clear something was amiss on the grid as the Ferrari crew swarmed around Vettel’s car, shades of Kimi Raikkonen drama before the start of the Malaysian Grad Prix a week earlier.

This time around the Reds got Vettel going, all seemed well as he got off the line at the start and tucked into second place behind race leader Lewis Hamilton. But it was not long before the German was on the radio reporting a loss of power and thereafter a stream of cars passed him with ease.

Shortly after the safety car period, triggered by Carlos Sainz’s crash and the subsequent removal of the Toro Rosso from the track-side, it was abundantly clear that Vettel’s race was over.

Vettel told reporters afterwards, “It’s normal to be critical, especially if things go wrong because it’s part of our job, but I need to protect them [Ferrari] – they’ve done an incredible job so far.”

“It’s just a pity in the two races with the reliability issues. But it’s like that sometimes and of course I’m disappointed, but now it’s important to get some rest and give my all for the last four races and see what happens.”

“We still have a chance this year. Obviously it’s not as much in our control as we like but overall I think the team is in a good way.”

“We are improving race by race and we got a lot further than people thought so for sure there are some positives, but today is not the day for that,” added Vettel who now trails Hamilton by 59 points with four rounds remaining.

The Ferrari driver has not won a grand prix since Hungary in July, at which point he led the championship standings by 14 points over Hamilton, since then the Mercedes driver has won three times and assumed the lead of the championship.

Big Question: Is it game over for Seb?