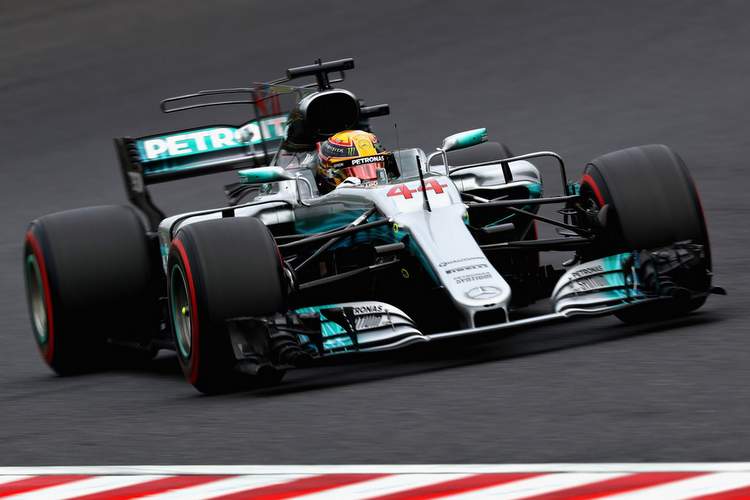 Lewis Hamilton will start the Japanese Grand Prix at Suzuka from pole position for the first time in his career, after topping the timing screens at the end of qualifying with Mercedes teammate Valtteri Bottas second fastest ensuring a front row lock-out for the Silver Arrows.

It was another stellar Hamilton lap, his time of 1:27.319 shattered the qualifying lap record, held by Michael Schumacher since 2006, and was 3.3 seconds faster than last year’s pole winning time set by Nico Rosberg. It will be Hamilton’s 71st top spot start in Formula 1.

He said afterwards, “It’s going to be a different view [from pole]. We’ve worked hard for the car to hopefully work well in the race. It’s always harder here once you get to the race, those Esses really kill the tyres, so I’m hoping we’ll be in a good position for that. Naturally the Ferraris will be rapid, as they always are, but the plan is to keep them behind.”

“It’s been a really good day and every lap was fantastic. To finally get the balance behind me with the great work of my engineers and the great timing from all the mechanics, I finally got on track and did the time. The car is crazy here.”

“I’m running out of opportunities to get this pole so I made sure I made it stick today. Valtteri did a great job, obviously he’s got the penalty at the start, but still he’s got a great opportunity in the race to get up there with us,” added the world championship leader.

Valtteri Bottas did well to rise from a problem packed weekend, including a hefty shunt in the FP3 session a few hours earlier. He was 0.332 of a second off his teammate’s pole winning time, but will start from seventh thanks to a grid penalty for an unscheduled gearbox change.

Bottas summed up, “It’s been a difficult weekend but my driving has been getting better.”

Benefiting from Bottas’ penalty will be Sebastian Vettel who ended the session third fastest, albeit nearly half a second down on Hamilton’s best lap, and will start from second place on the grid. It is also the closest the Finn has been to the Briton in qualifying since the Belgian Grand Prix.

Vettel said, “Qualifying has been quite good to be honest, I’m pretty happy. I tried everything on that last lap as I knew I had to take a bit more risks. It didn’t work! I knew that we’d be on front row because of Valtteri’s penalty.”

Red Bull again did not have the firepower to tap into in Q3, but Daniel Ricciardo did well to claim fourth place on the timing screens, pipping teammate, and Malaysia winner, Max Verstappen by a couple hundredths but the pair a full second down on the top time.

Ricciardo said afterwards, “I crossed the line and wasn’t shaking my head so I felt that was all I could get out of it. Obviously really close with Max, we are pushing each other with a good way, and I’m happy to inherit third.”

“Hopefully that clean side [of the grid] gives me that little bit more I’m after and I can run with the leaders at the beginning. The start will dictate a lot, it’s pretty tricky to overtake here. I’ve set my car up more for the race and taken some downforce off. So on the straights it will either give me a better chance to attack or defend,” added the Red Bull driver.

Kimi Raikkonen did himself no favours when he crashed in FP3 which forced his team to rebuild the car in time for qualifying. As the session started the Ferrari crew were still at work, but still managed to get their driver out in time. He was sixth fastest when the chequered waved to end the session.

Best of the rest were the Force India pair with Esteban Ocon seventh fastest, a tenth of a second up on his teammate Sergio Perez in eighth.

Felipe Massa was ninth in the Williams, ahead of Fernando Alonso who was tenth but will drop to the back of the grid due to a 35-place grid penalty.

Q1 was interrupted when Romain Grosjean lost control of his Haas in the S-Curves, slamming the wall before coming to a halt in the sand. He was uninjured, but it has been a very expensive week for his team.

Hamilton set the pace in Q1, rising to the top of the timesheet around 10 minutes into the session with a lap of 1:29.047 on soft tyres. He was followed by Räikkönen,who recovered from an FP3 crash to post a time of 1:29.163.

Verstappen took third place in Q1 ahead of Bottas, Vettel and sixth-placed Ricciardo in the other Red Bull.

The opening session was brought to an early end after just under 17 minutes when Grosjean crashed his Haas heavily at the end of the Esses section of the track. The red flags were immediately shown.

With just 1m18s left on the clock there was not enough time available for any drivers to complete a warm-up lap and cross the start/finish line before the chequered flag fell, so the decision was taken to not restart the session.

Thus, eliminated at the end of Q1 were 16th-placed Grosjean, Gasly,  Stroll, Ericsson and Wehrlein.

Stroll was somewhat unfortunate as he claimed to have been blocked by Perez earlier in the session, a complaint that resulted in stewards investigating the incident. However, after viewing footage from multiple angles, the stewards ruled that no further action was necessary.

Hamilton seized an early advantage in Q2, claiming P1 with a time of 1:27.819. He was followed by Vettel, though the German was over six tenths adrift of his title rival. Bottas took third place on his opening run with a lap of 1:28.543 set on soft tyres, with Verstappen fourth ahead of Ricciardo. Sixth place went to Raikkonen, who opted to complete his first run on soft tyres and he will start on that set.

The Red Bull drivers elected to stay in their garage for the final runs and though Hamilton took to the track, he eventually abandoned his run despite being quickest through the first two sectors. Vettel improved to a time of 1:28.225, while Bottas took third on soft tyres, which means that like Räikkönen, he will start on the soft compound.

Alonso was the only driver to escape the danger zone, with the Spaniard displacing Vandoorne to take 10th place, but it was something of a Pyrrhic victory as Alonso is set to take a 35-place grid penalty for changed engine elements. Vandoorne will therefore get a choice of starting tyre but will move up into the top 10.

At the end of the first runs of Q3, Hamilton sat in provisional pole position with a time of 1:27.345. That put him a comfortable 0.452 of a second ahead of second-placed Vettel, with Bottas third ahead of the Red Bulls of Ricciardo and Verstappen.

And the Briton proved to be untouchable in the final runs. He made a marginal improvement to 1:27.319 but it wasn’t necessary. Vettel could only find six thousandths of a second over his opening time and that allowed Bottas to claim P2 with a lap of 1:27.651.

Bottas, though, will drop five places and Vettel will therefore start on the front row ahead of Ricciardo and Verstappen who qualified fourth and fifth respectively.

Raikkonen was sixth in qualifying ahead of Ocon and Perez. Massa was ninth for Williams while Alonso was tenth.