Much has been said and written about the freak collision between Sebastian Vettel and Lance Stroll on the cooling down lap after the Malaysian Grand Prix, many pointing a finger at the Williams driver but new onboard footage from the incident exonerates the teenager.

Sky Sport have secured video footage (above) from Stroll’s onboard camera. We have made the screengrabs below for readers to consider. 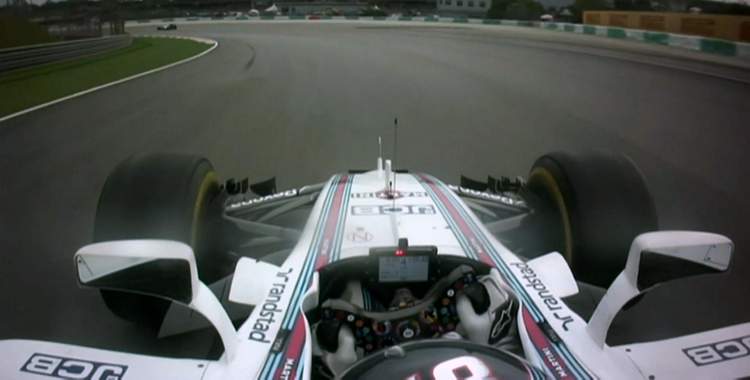 Stroll is cruising at a low steady speed and it can be seen that he is turning left into the corner on the the cool down lap. Note his distance from the the left side of the track. 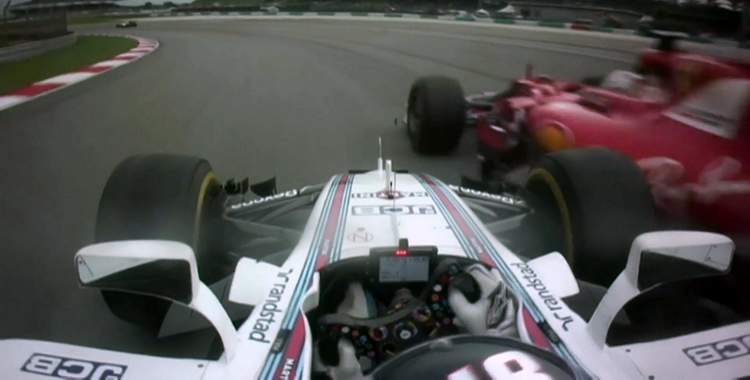 A split second before contact Vettel enters the frame. It shows that Stroll is still turning left and the distance to the left track-side is similar to his entry point. It also shows that the Williams driver has turned the wheel further to the left – he is not drifting out and into Vettel’s path as some have accused him of doing. 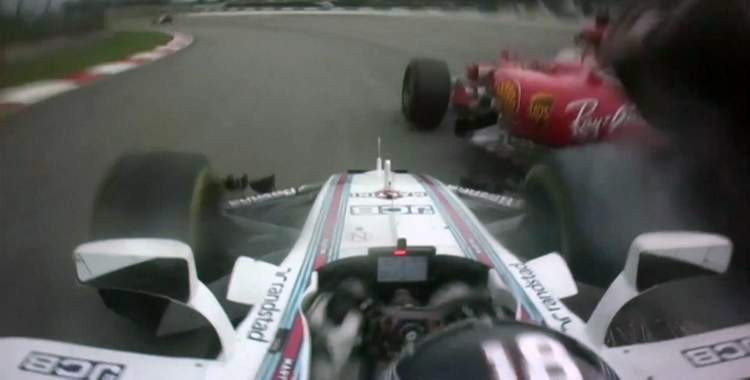 Clearly Vettel is travelling much faster and the rear wheel of the Ferrari strikes the front wheel of the Williams and snaps off, held fast by the tethers, it ends up resting on the right side engine cover of Vettel’s car. 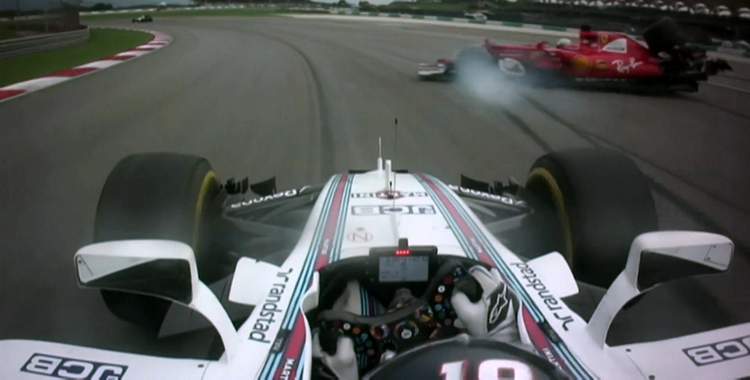 Now reduced to three wheels, Vettel spins after the contact with Stroll still turning to the left and keeping a steady distance from the left side of the track. He has not deviated from his original line.

In the aftermath of the race at Sepang, Stroll was vilified by many who only saw the evidence of the incident from Vettel’s side cockpit camera and the nose-camera from Romain Grosjean’s Haas.

But the new footage shows Stroll minding his own business, driving at low speed and keeping a steady line through the corner.

The stewards investigated the incident and deemed that neither Stroll or Vettel were to blame: “On the approach to Turn 5 during the slow down lap after the end of the race, Car 18 (STR) was towards the middle of the track, Car 8 (GRO) was closing from behind on the inside of Car 18 and at the same time, Car 5 (VET) overtook Car 18 on the outside and in doing so, turned in slightly towards the apex of Turn 5. Simultaneously Car 18 was moving slight away from the apex. This resulted in contact between the left rear tyre of Car 5 and the right front tyre of Car 18.”

Immediately after the race, Vettel was quick to blame Stroll, “I went to the outside to pick up a bit of rubber and I think Lance wasn’t looking and wanted to do the same, but that was too late – I was there already and we had contact. That’s completely unnecessary. I think he just didn’t look and then decided to pick up some rubber.”

Stroll appeared bemused when he gave his account of the incident, “I was on the in-lap, on my normal line, picking up rubber, doing all my switch changes, shutting down the car and Sebastian came flying by me, pushing round the outside like the race was still on. It was a very strange incident.”

Questions that arise as this new video footage comes to light is:

The incident capped a miserable weekend for Ferrari in Malaysia, but they may have some luck as they set up camp at Suzuka because there was no damage to the Ferrari gearbox which means Vettel will be spared grid penalties.