Renault and Brawn meet with McLaren at Monza 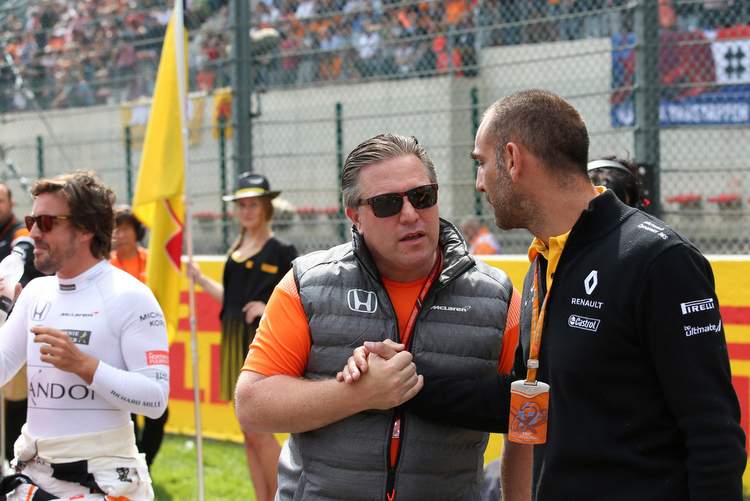 The Monza paddock was buzzing with activity and intrigue as a number of issues need to be settled by teams and engine suppliers, while several race seats needed to be filled by drivers for next season.

With the Italian Grand Prix being the last of the European races, it is really the last place where talks can take place in the confines of team motorhomes – offices away from the offices.

Any doubts that McLaren were talking to Renault were dispelled when the French manufacturer’s F1 chiefs Cyril Abiteboul, Alain Prost and Jerome Stoll were seen and photographed leaving the McLaren motorhome accompanied by F1 chief Ross Brawn on Friday.

This is not a surprise, but the lack of secrecy or discretion by both parties is surely a slap in the face for Honda who ironically enjoyed their best Friday afternoon on track with Stoffel Vandoorne and Fernando Alonso seventh and eighth on the timing screens at the end of FP1.

Nevertheless, McLaren seem intent on ditching their lucrative agreement with Honda no matter what it costs the team. But options are very limited and the last resort for them is to hope or help engineer a situation where Toro Rosso gets Honda power, freeing Renault to supply McLaren in 2018 and beyond.

This scenario emerged some weeks ago but since then it appeared that Red Bull, who own Toro Rosso, got cold feet and decided to stay with Renault. But word is that the matter is not totally closed and the energy drinks outfit is still open to such a plan should the conditions be right.

McLaren pursuing a Renault power unit supply shows just how desperate they are to ditch Honda. Renault has hardly delivered to their customers (or themselves for that matter) race winning engines. This year they have proven to be unreliable and still a second or so down on the pace setters Mercedes and Ferrari.

Thus the wisdom of such a move is questionable. Mercedes would be a far better alternative but the German manufacturer has its hands full supplying Force India and Williams. Cynics in the paddock believe that Mercedes are reluctant to supply a team which has the capacity to challenge them with their own engines.

The McLaren-Renault connection is an interesting one. Certainly not a ‘marriage’ a certain Ron Dennis would have countenanced during his tenure as chief at Woking. However Prost, part of the triumvirate that runs Renault’s motorsport programme, has a storied history with McLaren and for sure the team has a soft spot in his heart.

But for this all to fall into place Toro Rosso want a deal done by 6pm on Sunday – basically before the F1 circus leaves Monza.

McLaren chief Zak Brown revealed to reporters, “I think everyone’s under time pressure. As McLaren we don’t need to make any decisions this weekend, but I cannot talk about the situation at Toro Rosso.”

But Brown is still leaving a door open for a last minute Honda deal extension, “Honda is putting in additional resources and doing various other things that I can’t tell you about. I believe you’re aware that they’ve taken on the help of a number of consultants.”

“Next week we will get together and examine Honda’s plans and after that we will decide,” added Brown who is clearly juggling options until the very last minute, whereupon he will drop one ball and catch the other.

Which one he will be left with in his hand only time will tell, and right now too does not know.

Whatever transpires, after the high profile meeting at Monza, it now appears that McLaren divorce from Honda is increasingly inevitable. It was a clear case of the wife spotting the husband coming out of his new lover’s house and he not caring too much.