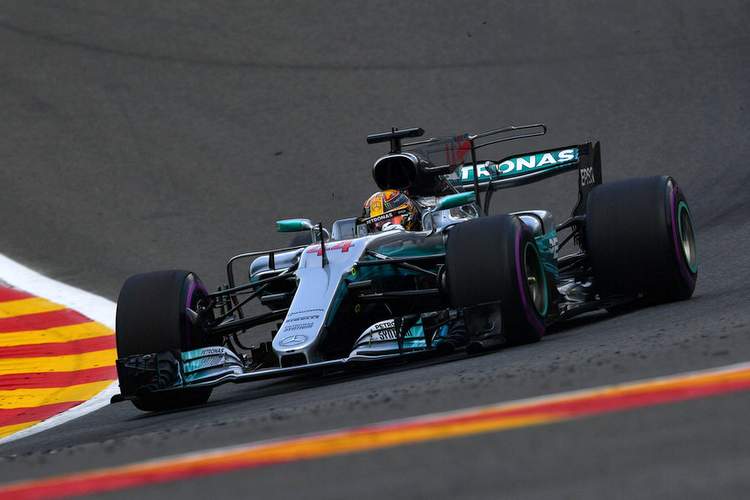 Lewis Hamilton was untouchable in qualifying for the 50th edition of the Belgian Grand Prix, dominating qualifying to claim his 68th pole position start – matching the record of Formula 1 legend Michael Schumacher.

Hamilton topped the timing screens at the end of each segment on a sunny afternoon at the spectacular Spa-Francorchamps circuit. He made two runs in Q2, and was the first driver to drop into the 1:42s.

His final lap in Q3 of 1:42.553 was a quarter of a second up on championship rival Sebastian Vettel, thus setting himself up in the best way possible to win on the day he competes in his 200th grand prix.

As the cars stopped in parc ferme former Mercedes chief Ross Brawn went out onto the track to congratulate Lewis Hamilton on equaling Michael Schumacher’s record of 68 career pole positions.

Brawn, of course, was the mastermind behind Schumacher’s success during the glory years at Ferrari, told Hamilton, “I am here to deliver a special message from the Schumacher family who want to congratulate you on equaling Schumacher’s record. He always said records are there to be beaten and they want to say a special thanks.”

Hamilton responded, “Big shout out to the fans here. I can’t believe it. A big thank you to my team, Ross Brawn was a big part of that. This is one of my favourite circuits so to put a lap together like that is like a dream.”

“I can’t believe it. I have to say a big than kyou to my team. The team have done an amazing job. To be up here ahead of the Ferrari is an amazing feeling. This is one of my favourite circuits so to come here and put a lap together like that is a dream. I’ve got the best job in the world.”

Emotional and close to tears, he added, “To hear that message Ross just gave, a big thank you. I pray for Michael and his family all the time. I have always admired him and still do today. I am honoured to be there with him now on the pole positions but he will still be one of the greatest of all time.”

Vettel, on the day it was confirmed he had signed a three year extension with his team, will no doubt be pleased that he will have the luxury of a front row start with a car that showed handy race pace on Friday which will serve him well on Sunday.

Vettel saved his best for last in Q3. Up to that point he had played second fiddle to his Ferrari teammate Kimi Raikkonen, but when it mattered the German rose to the occasion and delivered. Like Hamilton he was the only other driver to dip into 1:42s.

Vettel summed up, “On the last lap the car was more alive. I was lucky with Kimi who aborted the lap and he gave me a nice tow to get on to the front row.”

Valtteri Bottas has not been able to match his Mercedes teammate all weekend. Nevertheless did well to claim third spot on the grid, but was perhaps fortuitous that Raikkonen suffered vibration problems during his final run which caused him to abort his final flying lap.

But Bottas was brutally honest, as is his nature, when he admitted, “I was aiming for pole position but Lewis has been doing a perfect job all week and to be honest I was struggling.”

Best of the rest were the Red Bull pair with Max Verstappen and Daniel Ricciardo fifth and sixth on the timing screens, neither really able to make an impact on the pace setters.

Verstappen, with legions of his orange clad fans in the grandstands, was a second down on the top time but a quarter of a second up on teammate Ricciardo.

Nico Hulkenberg ended the session seventh fastest while his teammate Jolyon Palmer endured another luckless session. This time around he had the better of his teammate in Q1 and Q2, and looked set to beat the German in qualifying for the first time this season.

But not long into Q3 Palmer was forced to park his smoking Renault at the side of the track thus cruelly ending his chances of shining at a time when the pressure is on him to perform to retain his place in the team beyond 2017. Nevertheless he was classified tenth at the end of the session.

Up next were the Force India pair with Sergio Perez in eighth, edging his teammate Esteban Ocon, who will start from ninth.

Hamilton set the early pace in Q1 with a time of 1:44.184 to shade Vettel by just under a tenth. Verstappen, meanwhile, slotted into third place as FP3’s fastest man, Räikkönen, returned to the garage reporting handling issues that were confirmed by Ferrari as an anomalous high-frequency vibration.

Behind fourth-placed Räikkönen, Bottas was fifth, while Ricciardo slotted his Red Bull RB13 into sixth place.

The order at the top remained the same until the flag, with Ocon, Hulkenberg, Sainz and McLaren’s Stoffel Vandoorne completing the top 10.

At the foot of the order the positions were similarly set. With five minutes left on the clock Massa lay in 16th ahead of Kvyat, the second Stroll and the Saubers of Ericsson and Wehrlein.

It looked briefly like Massa might force his way into Q2 as he set a time good enough to push Sainz into the drop zone, but the Spaniard was following on his final hot lap and the Toro Rosso man’s lap of 1:45.374 vaulted him to ninth.

Massa therefore qualified in 16th position, but the Brazilian is set to take a five-place grid drop tomorrow having been penalised for failing to slow for yellow flags in final practice. 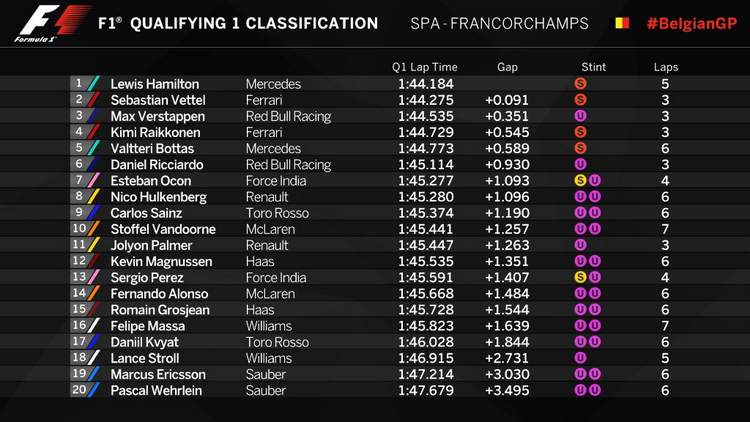 At the start of Q2, Räikkönen again reported that he was suffering with vibrations from the car. This time, however, he was told that he would have to make it through the session as best he can.

Hamilton took P1 early on with a time of 1:43.539, with Räikkönen appearing to shrug off his woes by taking P2, 0.161s behind the Mercedes driver. Bottas took third ahead of Vettel and Ricciardo.

In the drop zone as the final runs began were Hulkenberg in P11, followed by Haas duo of Magnussen and Grosjean, Sainz in P15 and McLaren’s Vandoorne, who had not set a time with less than five minutes left on the clock.

It was Hulkenberg who made the most significant move, with the Renault driver jumping to ninth in the dying moments of the session. It meant that Alonso was shunted to P11 and out of the session. Eliminated behind the Spaniard were Grosjean in P12 followed by Magnussen, Sainz and Vandoorne.

At the top Hamilton improved with his final run, posting an impressive lap of 1:42.927 to sit three tenths clear of team-mate Bottas at the Q2 flag.

Third place went to Räikkönen ahead of Verstappen, Vettel and Ricciardo. Seventh place went to Palmer powering into Q3 ahead of Perez, Hulkenberg and Ocon.

Bottas took P3 ahead of Vettel while Verstappen and Ricciardo slotted into P6 and P7 respectively.

There was trouble, though, for Palmer. The Briton was forced to pull over at Turn 15 with smoke pouring from the back of his Renault. His session ended there.

The Renault driver’s failure served as the break point in the session with those behind him failing to set a time before the final runs loomed.

Hamilton was first out and he immediately stamped his authority with a lap of 1:42.553.

Vettel was the only driver to get close, the German using a tow from team-mate Räikkönen to get to just over two tenths behind the Mercedes driver. Räikkonen, though was forced to abort his lap and finished in fourth place behind Bottas.

Verstappen took fifth, almost half a second clear of sixth-placed team-mate Ricciardo. Hulkenberg was qualified seventh ahead of Perez, Ocon and Palmer. 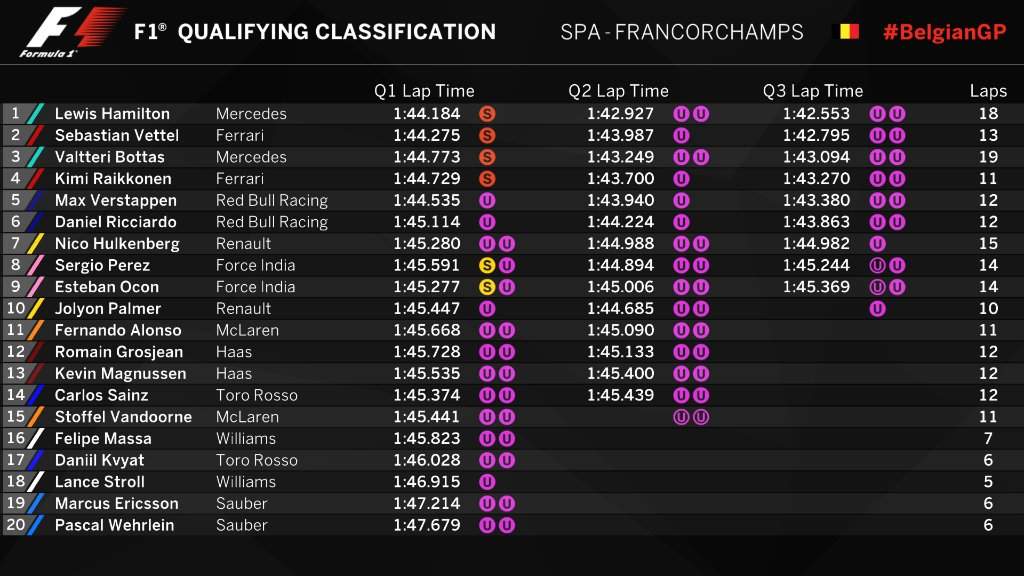