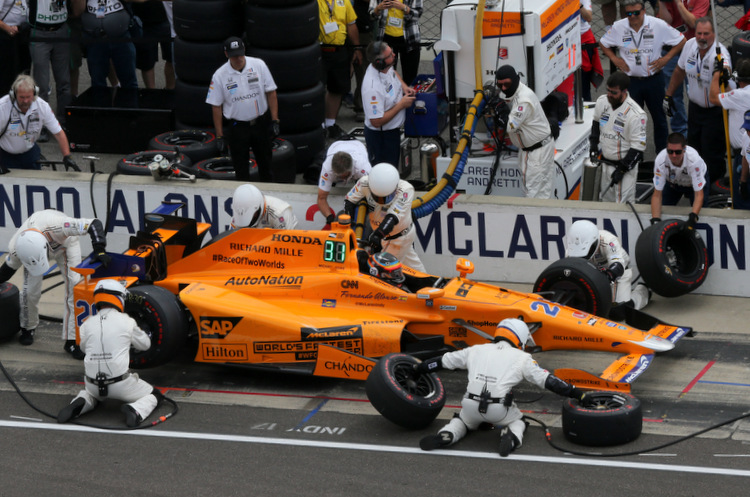 Fernando Alonso stole the show during the week of the Indianapolis 500, as Alonso-mania descended on the Brickyard and despite running strongly during the race, leading at times and always at the sharp end, his Honda engine expired with 20 laps to go.

It was familiar heartache for the McLaren driver whose Formula 1 campaign has been problem packed this season, and indeed resulted in his Indy 500 foray. It was a case of deja vu for the double F1 World Champion as engine problems continued to plague him.

The Spaniard qualified fifth and led 27 laps of the 200 lap race, running five side-by-side as he tussled among the front-runners for most of the race before an engine failure brought him back down to earth in the cruelest way possible.

The crowd gave him a standing ovation as he climbed from his smoking car, “I felt the noise, the engine friction, I backed off and I saw the smoke and yeah, it’s a shame.”

“It’s a very nice surprise to come here with big names, big guys, the best in open-wheel racing and be competitive,” added the Spaniard.

Although @alo_oficial finished the #Indy500 P24, he couldn’t resist drinking milk as he finished his final news conference #winnersdrinkmilk pic.twitter.com/caMFVnIBSG

In the end it was former Formula 1 driver Takuma Sato, Alonso’s Andretti Autosport teammate, who held off three-time Indianapolis 500 winner Helio Castroneves by 0.2011 of a second to win a tense race that featured a record number of drivers leading the 200-lap race on the Indianapolis Motor Speedway oval.

The 40-year-old from Japan, in his eighth Verizon IndyCar Series season after driving seven years in Formula One, collected his second Indy car. He made 90 grand prix starts for Jordan, BAR and Super Aguri between 2002 and 2008. His last Formula 1 race was at the 2008 Spanish Grand Prix.

It was also the second straight year that an Andretti Autosport driver won “The Greatest Spectacle in Racing,” following Alexander Rossi in 2016, and the team’s fifth overall in the race.

The race will be remembered for the high attrition and the massive accident suffered by Scott Dixon:

REPLAY: @scottdixon9 checked, cleared, and released after this turn 1 incident during the #Indy500 at @IMS. #INDYCAR pic.twitter.com/gaD950M27F