Will Mercedes fire Hamilton after ‘anarchy’ in Abu Dhabi? 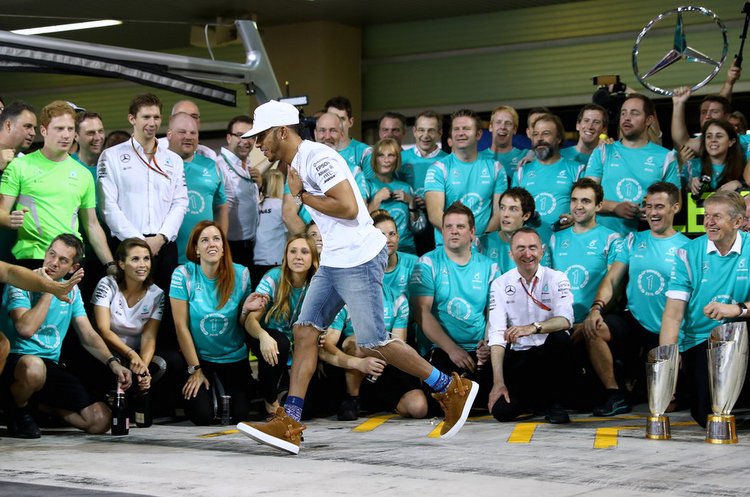 British media are in a frenzy in the aftermath of the Formula 1 season final Abu Dhabi Grand Prix where Lewis Hamilton was dethroned as Formula 1 World Champion and the crown taken from him by his Mercedes teammate Nico Rosberg, in a race which saw the Briton back-up his teammate into the pursuing pack and with it being accused of anarchy by team boss Toto Wolff.

In the end Rosberg did well to stick to Hamilton’s rear wing and finish the race in second, enough for him to claim his first Formula 1 World Championship and become the sport’s 33rd driver to do so.

The Mercedes team chief told reporters after the race at Yas Marina Circuit, “Undermining a structure in public means you are putting yourself before the team. It is very simple. Anarchy does not work in any team and in any company.” Full report here>>>

This has prompted a wave of speculation from British media, predicting that Hamilton could face everything from suspension to being fired.

And added in the report: “Lewis Hamilton is facing the SACK by Mercedes after being accused of causing anarchy in Abu Dhabi. The British ace TWICE ignored an order to speed up in his duel in the desert with Nico Rosberg in a bid to snatch a fourth drivers’ crown. Hamilton slowed the pace to back up his team-mate into the clutches of rivals but Rosberg held onto the second place he needed to win the F1 crown.”

And wrote: Hamilton ignored the instructions of his team to pick up the pace as the race reached its climax. The Brit attempted to back up the pack in order to put more drivers between himself and rival Nico Rosberg. Team principal Toto Wolff accused Hamilton of causing anarchy.”

The Guardian’s headline was: “Mercedes may suspend Lewis Hamilton for flouting team instructions.”

And reported: “Mercedes are considering disciplinary action – which could mean a fine or even suspension – against Lewis Hamilton after the three‑times world champion twice flouted instructions as his team-mate, Nico Rosberg, won his maiden Formula One world championship on Sunday.”

The Telegraph echoed The Guardian with their headline: “Lewis Hamilton could be suspended by Mercedes for defying team orders during dramatic Abu Dhabi finale.”

Reporting: “Lewis Hamilton could be suspended by Mercedes after brazenly and repeatedly defying team orders in a futile attempt to deny Nico Rosberg a first world title. In an astonishing climax to the Abu Dhabi Grand Prix, the three-time champion set out to back his team-mate into the path of nearest pursuers Sebastian Vettel and Max Verstappen, hoping that they could leapfrog the German and gift him the glory. Not only did the ruse backfire, it cast him into potentially serious difficulties with his employers, who suggested he had created a situation of anarchy.”

Newly crowned champion Rosberg agreed and did not see Hamilton’s tactics as a big , in fact praised his teammate’s  after the race.

“Lewis was using all his skill to do it perfectly,” said Rosberg. “There was absolutely no way for me to manage to get by, so of course I thought about it but it was just pointless so there was no way. He did it in a very good way, in a perfect way.”