The Village Idiot laughs last as Dennis gets the sack 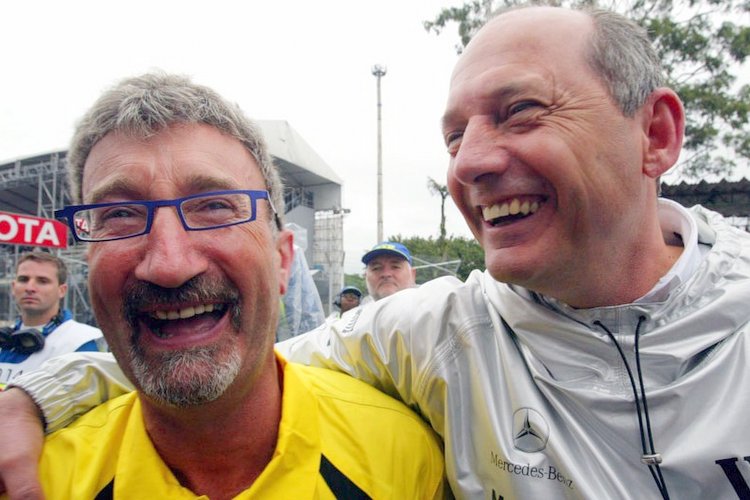 Last year around the time of the British Grand Prix, Ron Dennis the McLaren SEO (then) called Eddie Jordan a village idiot for criticising his management style in the wake of Martin Whitmarsh’s departure, despite the history Jordan is sad to see that Dennis suffering an undignified exit.

Last year Jordan, a team owner turned pundit, said of McLaren, “They have been a shadow of their former selves since they arrogantly stated that Lewis Hamilton would rue the day he left McLaren. That arrogance is still there at the top of McLaren.”

“Ron Dennis sacked Martin Whitmarsh, but Whitmarsh never did the job of running that team as badly as Dennis is doing it now,” added Jordan.

A few days later Dennis took revenge, “I consider Formula 1 a family, and families live in villages. And villages always have a village idiot. He [Jordan] fits the bill perfectly.”

Jordan stands by his opinion of the time, and said on RTE 2FM radio, “I knew there were rumblings and unhappiness there, not just for weeks or months but going back years.”

“There has been a fall out and Ron’s style of management didn’t quite suit people who owned the company. He’s 69 and has had a great career, a brilliant career, in fact, but obviously something didn’t work for them.”

As for what caused Dennis’ downfall, the Irishman said, “It’s hard to say. I’m only looking from the outside like everyone else. I’ve always been critical in the commentaries of the McLaren Formula 1 team in recent years. They haven’t been anywhere close to where they were in the past in both the driver’s championships and constructors’ championships that they won.”

“In recent years he dressed in civvies and he thought the road car business was going from strength to strength, which absolutely, it was. But I do believe that when you take on so much, it is very difficult to keep your eye on all of the things, and motor racing in particular Formula 1 the technology is moving forward.”

“Irrespective of the fact that he had Jenson Button and [Fernando] Alonso, two great world champions, in his car this year, really they were floundering, they just were not close to the pace.

“It’s the second year with Honda and you would have thought the combination there was enough to bring it forward. So I think the new management said ‘we need a change’. They brought in a new CEO, which probably upset Ron.”

“It is a shame, because Ron should have left in the highest applause, just like we saw [Felipe] Massa being applauded by the people when he retired this year at the Grand Prix in Brazil.

“It should have been the same for Ron Dennis. He has had an unbelievable career, a great legacy. That will stay, but it is the way that he has left, going to the high court, trying to defy it and not accepting it.

“At 69, you could say it’s time that he retired and lived off his great glory. Should I say that? You have Bernie Ecclestone who defies logic and he’s there at 86 and still doing a good job. Age shouldn’t come into it but perhaps it does,” mused Jordan.

Dennis first joined McLaren in 1980, and took complete control of it the following year. Soon, Dennis turned the team into a powerhouse, leading them through multiple drivers’ and constructors’ championships, and solidifying the team’s legacy as the sport’s most successful outfit after Ferrari.