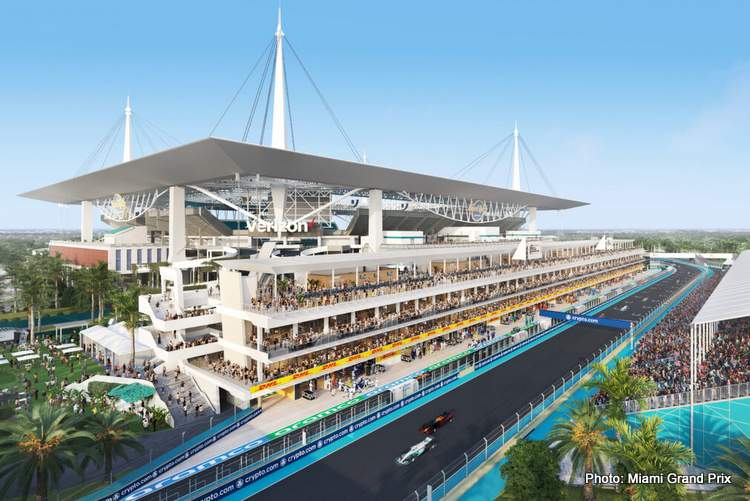 Miami Grand Prix Organizers, South Florida Motorsports, have announced changes to the venue and the track following huge investment ahead of the 2023 version of the American Formula 1 race.

The Miami Grand Prix made its debut on the F1 calendar in 2022, and was deemed a success despite some criticism for the track, but the show the organizers delivered was a success.

Ahead of the this years race, its second version, that will be held in May 2023, the organizers announces some changes including bulfing a new Paddock Club building, a new Team Village, as well as resurfacing the while track to increase grip levels and promote better racing.

South Florida Motorsports (SFM), the organizers of the FORMULA 1 CRYPTO.COM MIAMI GRAND PRIX can today announce details of their huge investment into the Miami International Autodrome ahead of the 2023 race on May 5-7th. A series of exciting upgrades include a brand-new premium hospitality Paddock Club building and the creation of the Formula 1® Team Village on the football field in the center of Hard Rock Stadium.

Following on from the success of the first-ever FORMULA 1 CRYPTO.COM MIAMI GRAND PRIX, organizers have made a significant investment ahead of the 2023 edition of the race. In consultation with the teams, FIA and Formula 1®, SFM have spent the past six months constructing the new permanent 190,000 square foot Paddock Club building that will house over 6,000 guests in premium suites and a luxury rooftop club.

The new three-tiered Paddock Club structure has been built above the existing team pit garages and overlooks the pitlane and start/finish straight. For the 2023 edition of the FORMULA 1 CRYPTO.COM MIAMI GRAND PRIX, SFM have appointed global catering experts DO & CO to provide a premium hospitality experience for this exclusive area. There are also additional hospitality experiences at Miami International Autodrome for 2023 which include new spaces The Vista at Turn 1 and The Boathouse at MIA Marina.

One of the major updates for 2023 will see the Formula 1® paddock expanded onto the Miami Dolphins football field in the center of Hard Rock Stadium. The all-new Team Village will house the hospitality units of the ten F1® teams where the drivers will be based across the weekend. Organizers have worked closely with Formula 1® on creating this new expanded paddock to create a truly unique experience for the teams as well as the benefit of this increased paddock space. For the first time ever fans will also have an exclusive insight into the behind-the-scenes working of a Formula 1® paddock as all general admission Campus Pass ticket holders will be able to access the 300 level of Hard Rock Stadium and look directly into the Team Village from above. These tickets will go on sale from January 23rd.

Organizers of the FORMULA 1 CRYPTO.COM MIAMI GRAND PRIX 2023 have also appointed renown track designers TILKE to oversee a repaving of the entire 3.36-mile race track which will increase the spectacle of this year’s race by assisting the opportunity for drivers to overtake one another. While there were officially 45 overtakes across last year’s 57 laps, the improved grip levels should lead to an increase in that number in 2023. TILKE are the leading circuit designers having designed and constructed the majority of new circuits in Formula 1® and with wider experience of hundreds of motorsport projects around the world.

“After an incredible debut race, we have been working flat-out to ensure the 2023 event is an even greater experience for everyone visiting the Miami International Autodrome,” said Tyler Epp, President of FORMULA 1 CRYPTO.COM MIAMI GRAND PRIX. “Stephen Ross and Tom Garfinkel are committed to making May’s event a best-in-class experience that is unlike any other Formula 1 race in the world. With new and enhanced hospitality experiences, the creation of the F1 Team Village directly on the football field and increased capacity we are expecting our second race to be even bigger and better for the fans, the teams, drivers, partners and everyone in South Florida.”