Norris: Wish I was there battling with Russell and Sainz 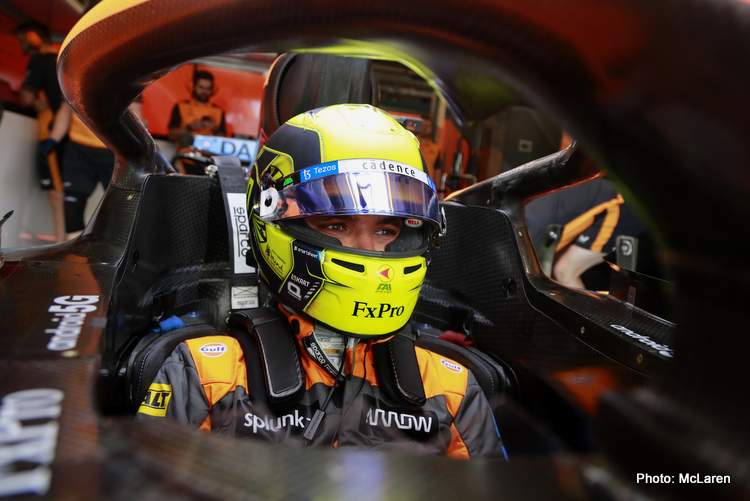 Lando Norris admits he wished he could already be battling with Carlos Sainz and George Russell for Formula 1 wins, something McLaren isn’t allowing him to do so at the moment.

Carlos Sainz was Lando Norris’ teammate at McLaren but made the move to Ferrari in 2021 to replace Sebastian Vettel, the Spaniard taking his maiden F1 win in Red at the 2022 British Grand Prix.

As for George Russell, the driver with whom Norris battled in the Formula 2 Championship, he made the switch to Mercedes for 2022 after debuting in F1 with Williams back in 2019. Russell also took his first F1 win at the 2022 Sao Paulo Grand Prix in Silver.

Norris, on the other hand, who started racing in F1 in 2019 directly with McLaren is yet to taste victory, as despite achieving six podiums, none of those was the top step, and his best finish in the Drivers’ Championship remains his sixth position in 2021, as McLaren are yet to make a breakthrough into the top three teams in the sport, missing again on that chance in 2022 with the new regulations.

McLaren need to make a leap

Speaking in an exclusive interview with Motorsport.com, Norris reflected on McLaren’s status in the sport after being beaten by Alpine in 2022 to fourth in the Constructors’ Championship the Papaya finishing a disappointing fifth dropping from third in 2021.

Norris referred to the leap Ferrari made with their car in 2022 and insists McLaren must find the same level of performance over the winter ahead of the 2023 season in order to press ahead.

“That’s achievable. I think what they did was extremely good,” Norris told Motorsport.com on the matter. “Going from where they were [in 2021], from almost getting beat by us, to going to where they are getting wins, fighting for podiums every single weekend.

“That’s what we need to be aiming for. That level of a jump from one season to another,” the Briton maintained.

“They’ve obviously had, not the luck, but they’ve maximised a new era, a new rules set for Formula 1 with new cars, which has allowed them to make a bigger jump than ever,” Norris explained. “But there’s still plenty of opportunities for us to achieve something like that.

“I think already next year we need to make progress. I have good faith that we can. We have a huge amount of what we need in the right areas and the right people and so on.

“It’s just that final hurdle, the final thing to get us up to the same level to then have no excuse against Red Bull, Mercedes, and Ferrari. The team know that they need to do a better job,” Norris said.

The 23-year-old admits he looks at Russel and Sainz, as both became grand prix winners and wishes he was fighting with them in their league.

“But it’s just not the position that I’m in at the minute… I can race against them in the future, and I can do the same as what they’re doing,” Norris concluded.

Norris now gears up to start his fifth season in F1 and with McLaren, with a new teammate on the other side of the garage; Oscar Piastri, who is making his debut in top flight replacing Daniel Ricciardo.