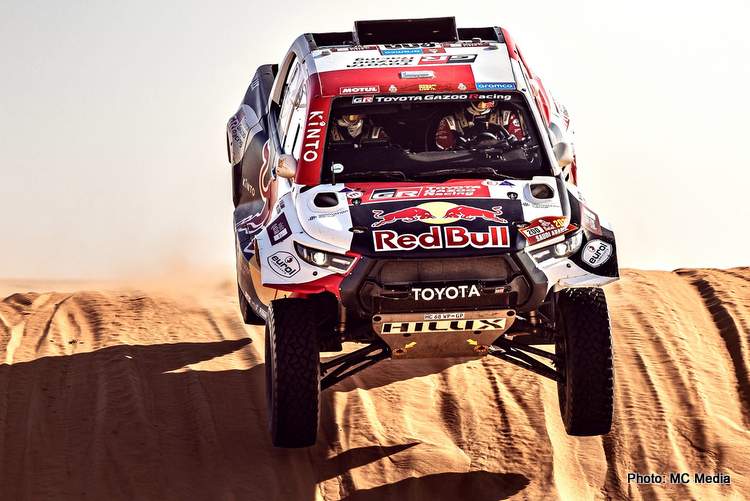 Al Attiyah and Baumel put in a faultless display to beat Sebastien Loeb’s Prodrive by an hour and 20 minutes with Brazilian rookie sensation Lucas Moraes third. Giniel de Villiers and Denis Murphy, and Henk Lategan and Brett Cummings were fourth and fifth among five SA-built Toyotas in the top ten. Red-Lined cars took a T1.1 class 1-2, and Eben Basson and Abertus Pienaar won amongst the T3 SSV rookies. 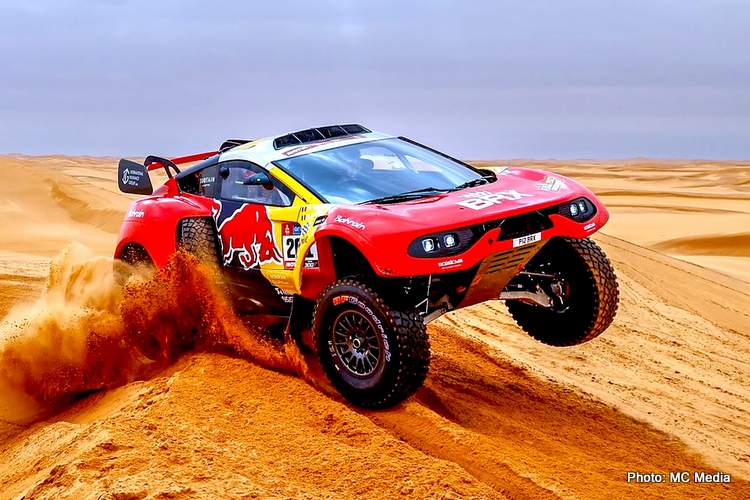 Winners, Al Attiyah and Baumel had another perfect run to their third win in a Toyota Gazoo Racing Hilux, and Nasser’s fifth Dakar win. Their sheer pace and consistency clearly benefits from their racing all year in the R2R world championship, and Toyota Gazoo Racing’s consistent development in the South African series. Their main rivals race less often.

Once he was finally into the groove, Sebastien Loeb was relentless and set a record six stage wins in pursuit. The nine-time World Rally Champion ended second ahead of a trio of ever-dependable South African Hiluxes. Young Brazilian rookie Lucas Moraes was the find of 2023 and a future Dakar star for sure, alongside legendary navigator Timo Gottschalk in their bright orange Hilux.

South African Dakar legend Giniel de Villiers has now incredibly finished every one of the 20 Dakars he has started. Nineteen of them in the top ten. Fourth this year alongside Dennis Murphy, they came home ahead of Toyota Gazoo Racing Hilux DKR T1+ teammates and compatriots Henk Lategan and Brett Cummings. Five Hallspeed Toyotas in the top ten is also an immense feather in Hallspeed’s cap. 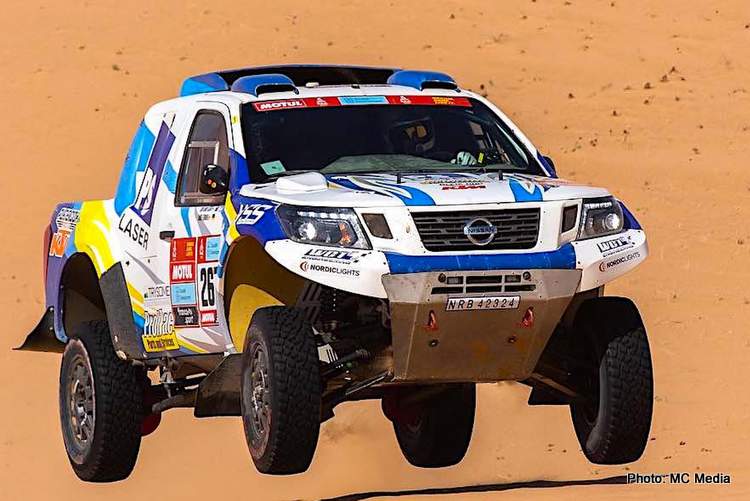 Century Racing‘s stellar performance fell apart in the final two days. Baragwanath and Cremer’s Factory CR6-T led the T1.2 4×2 class until their penultimate day crash. Ninth placed Frenchmen Mathieu Serradori and Loic Minaudier’s car suffered engine failure on the final day and had to be towed home to 12th by Baragwanath’s machine. An unhappy end to a stunning performance.

The car race in review 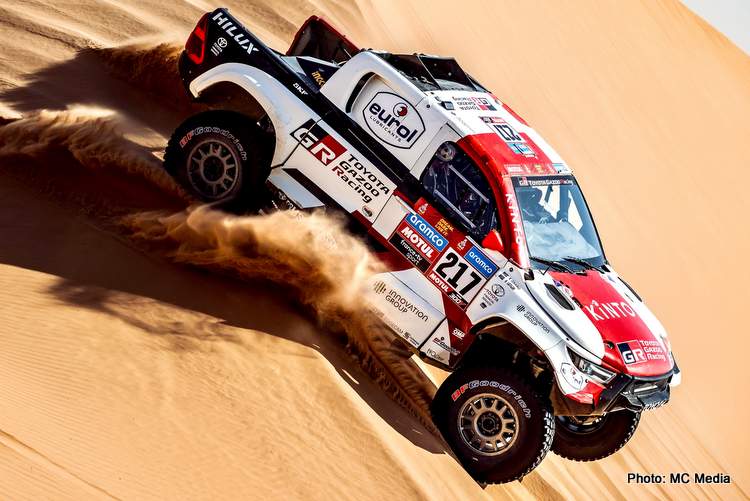 Carlos Sainz and Lucas Cruz’ petrol-electric Audi hit the ground running to win the prologue and day 1. Attiyah took Day 2 as Loeb tumbled to 32nd, stuck in the desert without spare tyres. Chicherit’s Prodrive hit back to win Day 3 as Al Attiyah moved into a lead he would never relinquish. Loeb was back to win Day 4 before Al Attiyah consolidated his lead with double wins on Days 5 and 6.

Week 2 was all about Sebastien Loeb. He took a record six stage wins on the trot in his relentless charge, topped a Prodrive 1-2-3 Tuesday, dominated the marathon on Wednesday and Thursday and moved up to second Friday. He won again on chaotic Saturday as the 4×2 leader Baragwanath crashed. Week 2 also claimed Sainz’s Audi, Zala’s Prodrive, Lionel Baud’s Toyota and Simon Vitse’s MD. 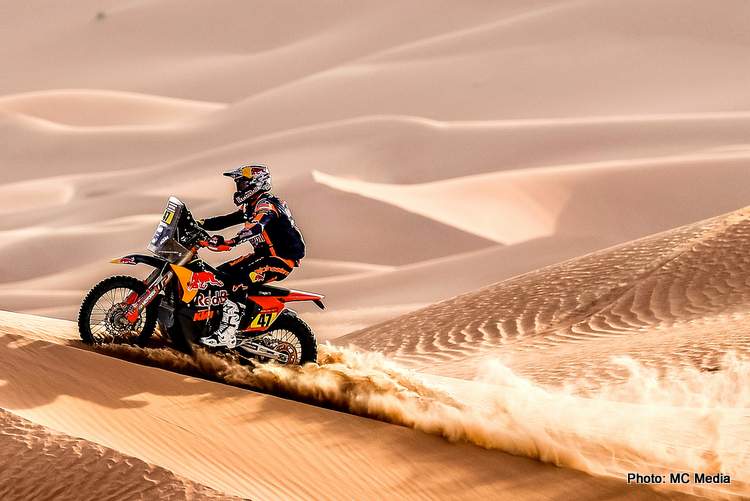 In an incredible bike race, KTM teammates and former winners, Argentine Kevin Benavides, and Aussie Toby Price were tied in the overall lead at 33 kilometres into Sunday’s final stage. Price however slipped to allow Benavides to open up a minute lead by midway. Price duly clawed back a few seconds, but it was not enough to beat the stage and overall winner, Kevin Benavides.

Of the South African bikers, 20th on the day 16th overall, overall rookie winner Michael Docherty’s HT Husqvarna ended third in the amateur R2 class behind Romain Dumontier and Paolo Lucci. Iron Mike led the R2 class early on, but a tough third day had him on the back foot. He fought back hard, three times challenging for overall day wins as he clawed back to that much deserved rookie victory. 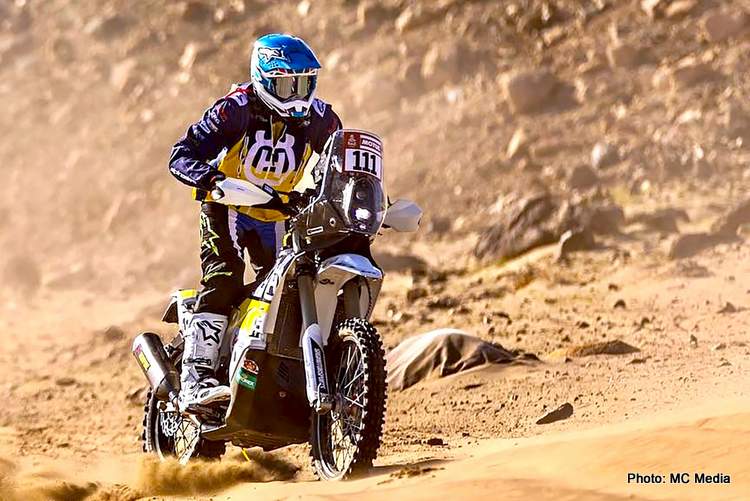 Compatriot and teammate, epic no service Malle Moto Original class winner Charan Moore ended 24th on Sunday, 29th overall and 12th in amateur R2. Consistently in the Malle Moto fight, he led most of the way but had to fight back after a rough tenth day dropped him back. Malle Moto riders are not allowed backup of any kind and must service their own machines out of small metal box.

Botswana hero Ross Branch started well and ended fourth on Day 2 before enduring a disastrous few days including running out of fuel and being stranded in the desert to lose seven hours on Day 4. Ross however fought back back to win two bike stages through week 2 as he brought it home in 26th overall. 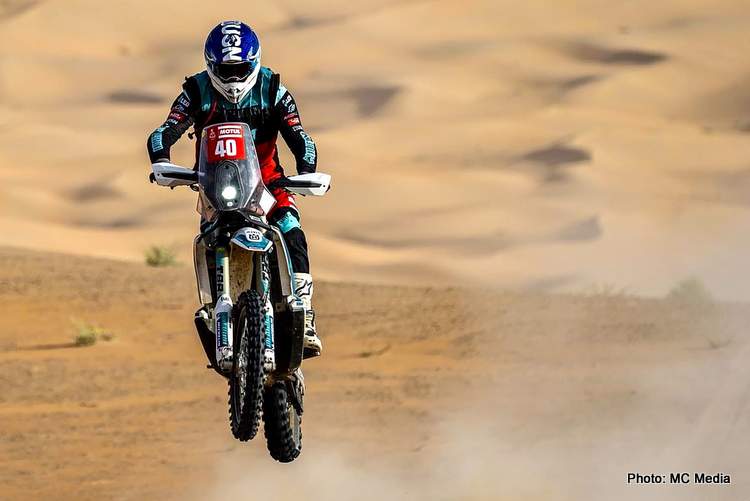 Kevin Benavides duly took the day to win his second Dakar overall and put KTM back after three years off the top step of the podium. Dakar was cruel as ever, claiming top riders, 2022 winner Sam Sunderland and SA lad Bradley Cox on Day 1, Brabec on Day 2 and Barreda, Mattias Walkner and Klein in Week 2.(Dakar reports by Motorsport Media courtesy of Toyota Gazoo Racing)