Brown: McLaren door open for Ricciardo in the future 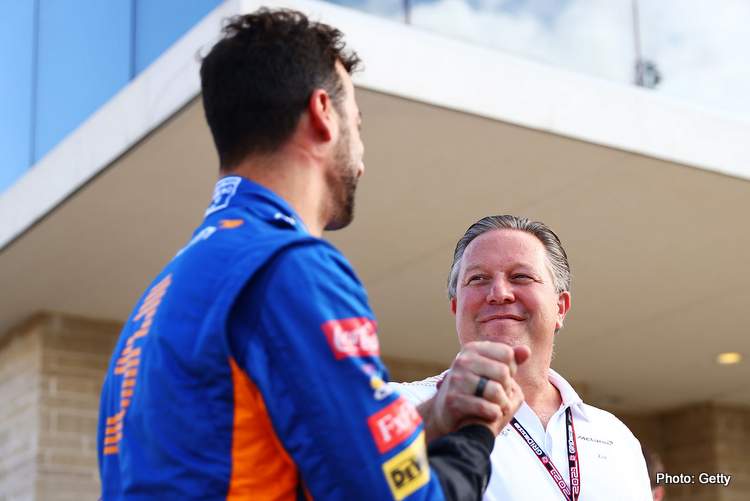 Zak Brown, McLaren’s CEO, revealed that he is open for a future collaboration with Daniel Ricciardo, and that the doors at Woking remain open for the Australian.

McLaren terminated Ricciardo’s contract at the end of the 2022 Formula 1 season, one year before its expiry date due to Honey Badger’s below par performances for the team since joining them in 2021, his win at Monza that year the only highlight of that relationship.

Brown however believes Ricciardo’s failure to perform in McLaren machinery remains a “great mystery”, frustrating for the team, but insists the driver lacks nothing in terms of talent.

“He’s got the talent. He’s showed us that in Monza and he’s won eight Grands Prix,” the American said in an interview on McLaren’s YouTube channel.

“It’s frustrating, for all of us,” he added. “I very much hope to see him on the grid again in Formula 1 which is his desire and the door remains open for him to be in a McLaren in the future.

“If the stars align, I’d love to go racing with him again,” Brown admitted.

McLaren have turned to another Aussie to replace Ricciardo, in the form of rookie Oscar Piastri, whom they scooped from Alpine, entering a legal battel with the French team for his services.

Brown spoke highly of Piastri; he said: “We think Oscar is going to be a sensational racing driver. If you look at his career to date he’s won a lot of championships in his first year, which always tells you a driver is special.

“He’s got a great mental approach to the sport and now that we feel Lando has a lot of experience, we feel like we have a great blend of experience and youth – our experience just also happens to have youth.

“We sit here very excited with the potential of our driver line-up of Lando and Oscar for the foreseeable future,” the McLaren CEO maintained.

Indeed with Lando Norris being 23 years old, and Piastri just 21, McLaren enters the 2023 with the youngest driver lineup on the grid, but Norris has been around for some time now, the upcoming F1 season his fifth in top flight, meaning he has accumulated significant experience despite his young age.

Norris has comprehensively beaten Ricciardo during their partnership in Papaya, and it would interesting to see how Piastri stacks up against the Briton on their first season together.