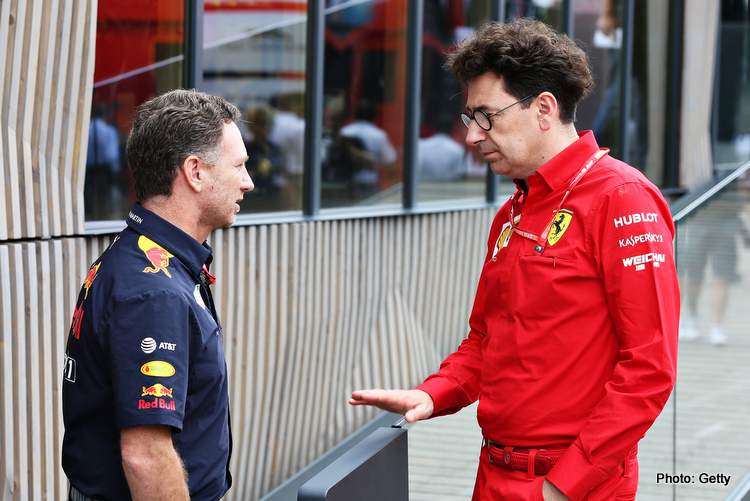 Christian Horner pointed out that Mattia Binotto’s replacement will be the sixth Ferrari team boss he’s sat opposite since his appointment at Red Bull.

It’s been almost a week since Ferrari confirmed that Mattia Binotto has resigned and will be leaving the team ahead of the 2023.

The Scuderia are yet to appoint a replacement form Binotto for their Formula 1 operations, and Red Bull’s Christian Horner has shot down suggestions he might be contemplating a move.

“My commitment is with the Red Bull team,” Horner told Sky Sports F1. “I’ve been there since the beginning and we obviously have a close attachment.”

However, Horner is not surprised by Binotto’s exit after Ferrari failed to win the Title in 2022 despite starting the season with what was arguably the fastest car on the grid, the F1-75.

“Not really,” was his response when asked whether he was surprised by the Binotto news. “It is obviously Ferrari’s choice.”

Horner also pointed out that high number of Ferrari bosses he came across since he became boss at Red Bull in 2005.

“I think this will be the sixth team principal that I’ve sat opposite since I’ve been at Red Bull,” he said, adding: “It’s difficult for him. They had a great car. They were competitive.”

Ferrari fell prey to their usual strategic and operational errors in 2022, and combined with reliability problems as well as a couple of driver errors, drove themselves out of contention in the Championship.

Ferrari ended up runner up in the Constructors’ Championship, with Charles Leclerc also second-best behind Red Bull’s Max Verstappen.

On the other hand, Red Bull in 2022, with Horner at the helm, have secured their fifth F1 Constructors’ Crown since 2013, and their sixth Drivers’ Title, four with Sebastian Vettel between 2010 and 2013, and two with Verstappen the Dutchman’s first being in 2021.