Horner: Leclerc and Perez will be ruing opportunities missed 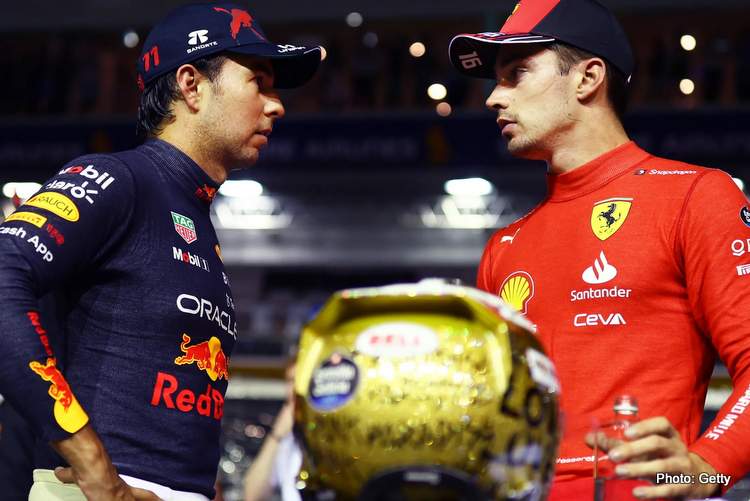 Christian Horner claimed both Charles Leclerc and Sergio Perez will be ruing missed opportunities over the course of the 2022 Formula 1 season.

Both Perez and Leclerc fought tooth and nail at the 2022 Abu Dhabi Grand, trying to fight for the runner up position behind Champion Max Verstappen.

Both drivers entered the weekend at Yas Marina Circuit tied on points, but in the race it was Leclerc who finished ahead of Perez, this securing second in the Drivers’ Championship.

Perez was set on a two stop strategy, meaning he had to chase Leclerc on the final stint, but ran out of laps and finished a couple of seconds behind his Ferrari rival.

Perez seemed to suffer more from graining, hence the two stop strategy in Abu Dhabi, but when asked about the Mexican’s claim that he didn’t enjoy the 2022 low profile tyres on the 18″ wheels, Horner gave an explanation.

“I think what we’ve seen this year is that the margins are so fine,” he said. “You know you can be a click of front wing out, or a tiny bit of ride height, or a small amount of mechanical balance and it will have a dramatic effect on your tyre life.

“And I think that Checo’s driven so many races where he’s been fantastic on the tyres,” Horner pointed out. “In this race, it was just the first stint that compromised him where the front right started to grain and grain quite heavily compared to both Charles and Max.

“And that then put him out of sync where we had to pit, and that was on a very compromised one-stop, so the two-stop was the more attacking race,” he explained.

Perez finished three points behind Leclerc in the Championship, meaning that even if Verstappen handed over sixth place in Brazil, the team order he refused, the extra two points the Mexican would’ve gained wouldn’t have been enough to beat the Monegasque.

Look at the whole season… Not only Brazil

And considering the #11 RB18’s issues with tyres in Abu Dhabi, Horner was asked if that was a relief, that what happened in Sao Paulo did not impact the final result.

He commented: “Look, you know, last week, I think you’ve got to look at the season on a whole. And I think when you look at it, both Charles and Checo will be ruing opportunities missed, probably quite a few more for Charles than there was for Checo.

“And you got to look at it as a performance over a year not over an individual race, and Checo had the best year that he’s ever had in Formula 1.

“He’s won the Monaco Grand Prix, his drive in Singapore was outstanding. It was the best grand prix I’ve seen him drive, and I think he’ll take a huge amount of positives, so it’s the first time he’s finished in the top three in this championship, and, again, I think he’ll take many lessons out of this year,” Horner explained.

Quizzed whether Perez can challenge Verstappen over a season; he said: “Max is operating at a level that I’m not sure anybody – the way he’s driving at a moment, in the same equipment – will be able to repeat what he’s done this year.”