Parc Ferme: Is that it? 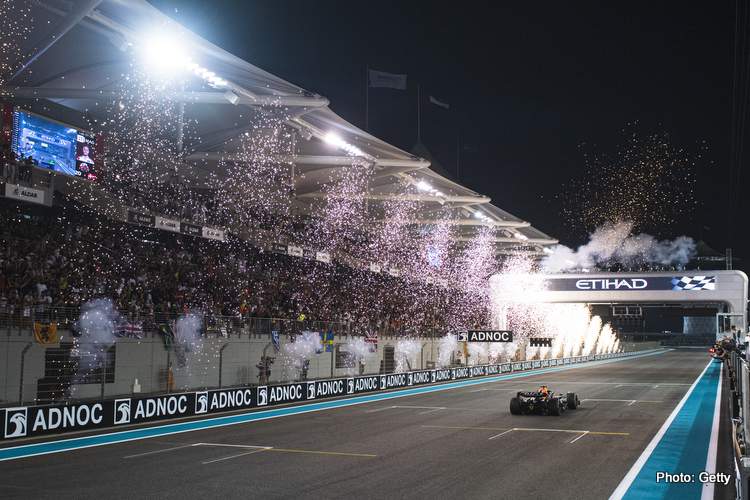 Was it just me or did anyone else find the 2022 Abu Dhabi Grand Prix post-race celebrations somewhat muted?

Yes, the firework display was awesome, the confetti cannons boomed, and there were even donuts on the main straight but still, it all seemed a bit subdued; especially between the top three drivers, almost like there was an elephant in the room…

Saying goodbye to Sebastian Vettel was a contributing factor, although in Formula 1, leaving is a relative term. We know he’ll be back, probably in the Aston Martin garage working together with Fernando Alonso.

Between the two of them, they should be able to make some inroads in raising the Team’s performance, an easier job than trying to save the parent marque, I think.

Failing that, “Uncle Seb” should start managing drivers. I don’t know what his commercial negotiating skills are like but as a mentor to Stroll the younger, he’s managed to make a rayon purse out of what was a sows’ ass earlier in the season. 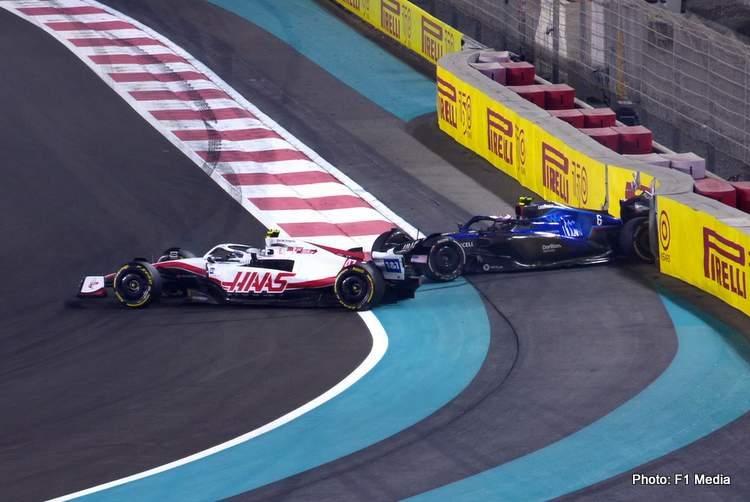 The four-time World Champion wasn’t the only departing driver from the grid of course. Mick Schumacher and Nicolas Latifi were both on their relative F1 chicken songs.

To celebrate his exit, “not so quick” also joined in the donut show finale. Unfortunately, the display paled in comparison to his and Latifi’s earlier demonstration of synchronized spinning earlier in the race.

Trying to dive down the inside of the Williams driver at the second apex of Turn 9, Mick Jr. made contact with the Canadian’s inside rear, immediately turning him around. In a reflex “oh shit” moment, the young German then touched his own brakes and there they were, rotating in perfect harmony, swapping ends in unison.

I swear the tears streaming down my face were not from laughter but from the resulting emotion of witnessing a thing of beauty. Nothing else I promise.

Back to my roots… 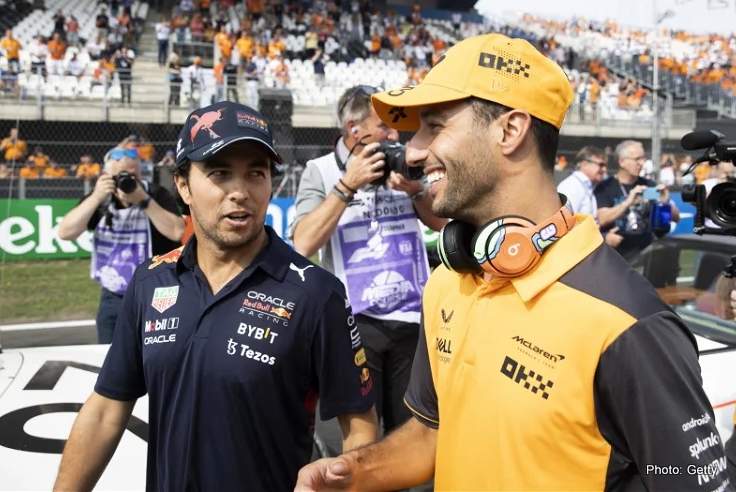 Another driver closing the door from the outside was Daniel Ricciardo. I knew he was in for a torrid time this year but didn’t expect him to be ousted by a boy who is barely off formula milk.

However, it seems that there are several non-racing F1 lifelines there for the “Honey Badger”. A test driver role at Mercedes had been mooted, but his more probable route will be to Red Bull [confirmed as these words were written].

Originally it was envisaged he would be doing a “DC” (David Coulthard) for the Team, acting as a PR/Ambassador etc. However, that may all change. Especially after the contretemps that followed Brazil between the relative camps of Max Verstappen and Sergio Perez.

It seems Helmut Marko needs a spare because, despite the words of peace spoken in Abu Dhabi, the actions spoke louder. “The Good Doctor” suggested the hatchet had been buried between the two drivers, which was true.

What he forgot to mention though is that it was in Perez’s head! 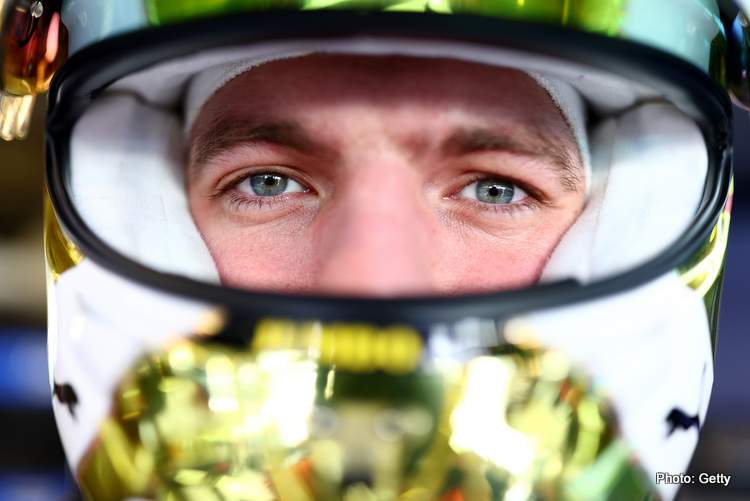 It started in qualifying with Max giving the Mexican a tow down the back straight, helping him to set a time that put him on pole. Having done that, “The Klompmeister” promptly went out and sans tow, blew that time away. Boom, in your face Checo.

Then, in his interview at the end of the race Verstappen made it clear that holding up Charles Leclerc was never on the table, saying: “Of course, you can possibly block, but is that fair racing? I think [it’s] not the nicest way, going out of the season like that.”

He then correctly pointed out that Checo screwed up by failing to pass backmarkers Pierre Gasly and Alex Albon in a timely manner. THUMPH, knee to the plums!

Ultimately, the two-time World Champion made it very clear to the Team – I’m the main course and dessert, Sergio is just soup, oh and third in the 2023 F1 Drivers Championship! LOSER!

Maybe this is an appropriate reminder for Checo about the hard facts of being a race driver. He can’t expect Max to do his Grand Prix’s for him.

Chaz puts on his racing boots 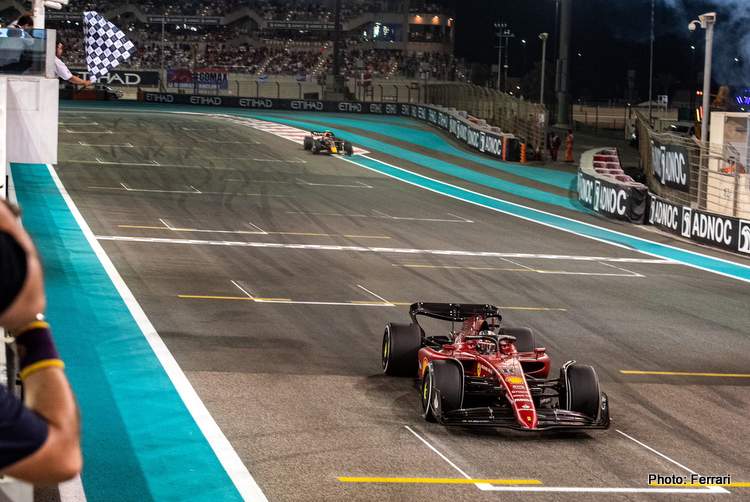 Meanwhile, Ferrari got to pat themselves on the back after delivering their first cock-up free race strategy and pit box performance since… I can’t remember.

Either way, well done all at Maranello. Happily, this coincided with Charles Leclerc deciding to come out of the Transporter and attend a race for a change. Net result second place in both Constructors’ and Drivers’ Championship.

For me, this was his best drive of the season. He hung on in there churning out the lap times while keeping his tyres on song. Not an easy ask in a car that has been particularly unkind in the rubber department this year.

It was good to see him finish on a high note and once again look like a driver that could take on Verstappen in 2023 if he has a half-decent car, or team, or both. 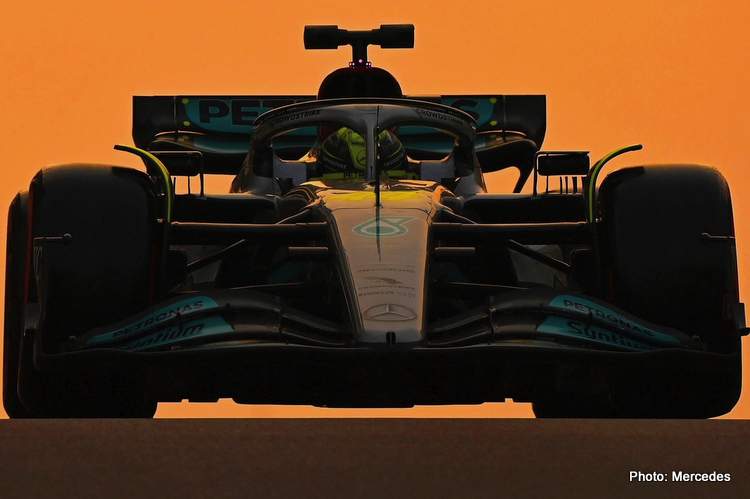 After the heady highs of Brazil, it was back down to earth with a bump for Mercedes at Yas Marina. However, this time it was Lewis Hamilton’s turn to fly the flag for the Team.

Qualifying fifth was as good as it was going to get, and an initially promising start saw him in fourth heading to Turn 6. That is until Carlos Sainz sent it down the inside under braking, easing Hamilton into the “sausage” and launching him into the air.

With no real suspension in the car, the damage was a certainty once it landed back on terra firma. Hamilton, however, knew how to handle this one and set off across the infield, foot full in, to come out ahead of the offending driver à la 2021.

The Stewards looked set to award “Mr. Vamos” a five-second penalty but then decided there was no case to answer other than Hamilton having to hand back the position after he “shortcutted” the circuit. Fair dos.

It had worked last year but in honesty, Sainz had done enough to claim the corner. The hand- back though was a bit rude, letting Carlos by on the support pits straight then immediately catching DRS and passing him again at Turn 9 but hey, them’s the rules.

When life gives you lemons, display them

Eventually, Lewis’s gearbox gave up and he trundled back to the pits stuck in seventh, ironically only one number higher than his final finishing position in this year’s Drivers’ Championship.

According to Toto Wolff, the W13 will be mounted on the wall back at headquarters as a reminder, although a reminder of what he didn’t say. I’m thinking Hubris maybe?