Verstappen: You can block but is that fair racing? 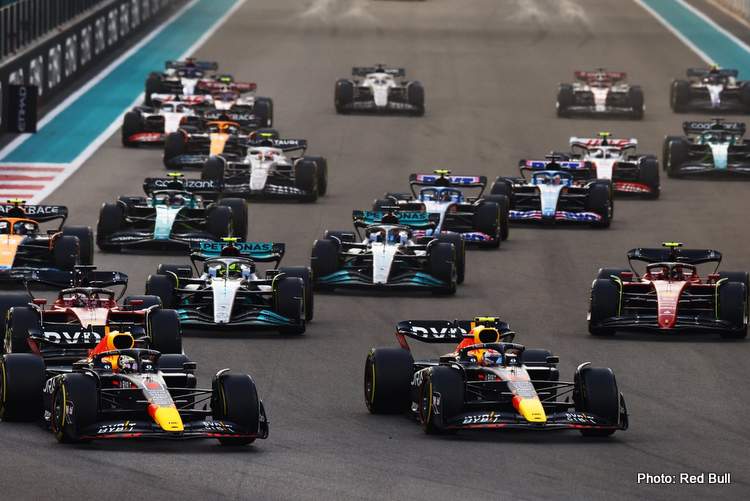 Max Verstappen believes the option of falling back, blocking Charles Leclerc in the 2022 Abu Dhabi Grand Prix to allow Sergio Perez to catch was possible but questioned the fairness of such a move.

Verstappen vowed to help teammate Sergio Perez secure second in the 2022 Formula 1 Drivers’ Championship, after refusing a team order to do so in Brazil, and started by towing the #11 Red Bull RB18 in qualifying.

The Red Bulls started Sunday’s race first and second, with Charles Leclerc – Perez’s rival for runner up – third, and while Verstappen drove into the distance, Perez was locked in race-long fight with Leclerc, one he ultimately lost, having committed to a two-stop strategy, the Ferrari driver making a one stopper work.

Speaking to the media after the race, Verstappen was asked whether there was an instruction from Red Bull  to slow down and act as a road block to Leclerc to allow Perez to catch up and attack.

“No, there was not, but also that is quite a tricky call to make,” Verstappen said. “You also don’t want to end up… of course, you can possibly block but is that fair racing?

Not a nice a way to finish a season blocking someone

“I think not the nicest way going out of the season, like that,” he insisted. “And it looked like Checo was catching him enough to try and actually get a move.

“But yeah, unfortunate. I think, like Checo said, that second stint, because the deg was quite high on the Medium, in hindsight, probably, as a team, we could have pushed a bit more on that on that middle stint for Checo, but that’s always easy to say afterwards.

“At the time, we thought that we had to be a little bit careful on the tyres. Again, we’ve had a lot of great weekends, but even in great weekends, there are always things that you can learn,” the double F1 Champion concluded.

Perez was later asked about the incident with Gasly, who was racing Alex Albon at the time while both were being lapped, costing the Red Bull driver time.

“Well, I certainly lost a bit, probably a second or so or probably more,” Perez revealed. “It was clearly blue flags, but he was in a fight and it’s pretty hard not to give up the position.

“I think he was thinking to go for the move but I just end up being there and I thought he left it opens. I went for it and luckily I could brake at the last minute otherwise there would have been contact so I think in normal conditions that will certainly be a penalty for Pierre but it is the last race,” he explained.

“I’m just happy to go home, don’t discuss anything and it’s how it goes sometimes. So nothing really more to add,” a clearly frustrated Perez concluded.

You can be incredibly proud of this season, @SChecoPerez 🏆 pic.twitter.com/sQzhDTXTCC