Alonso: One day less to be in green 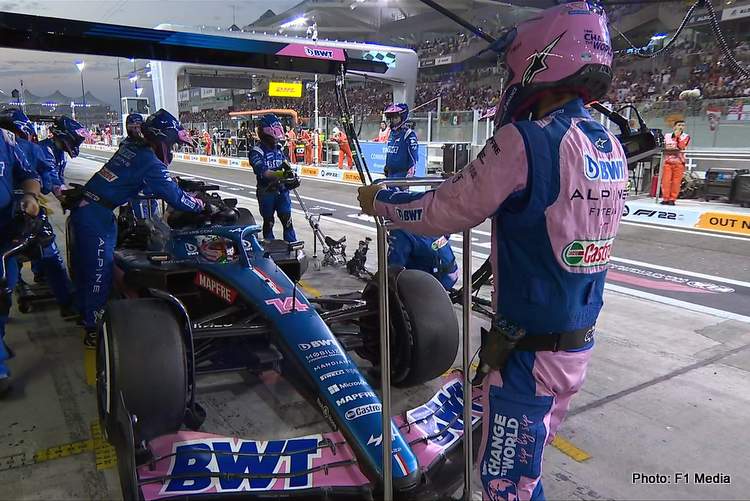 Fernando Alonso said after retiring from the 2022 Abu Dhabi Grand Prix, that the best thing about his Sunday is that he had one day less before joining Aston Martin.

The Spaniard, who returned to Formula 1 in 2021 with the Enstone-based outfit, which also took him to his two world titles as Renault in 2005 and 2006, is replacing the retiring Sebastian Vettel at Aston Martin next year.

He had hoped to sign off on a high but was called into the pits to retire on lap 27 of the 58-lap race. Alpine still secured fourth in the constructors’ standings ahead of McLaren but it was Alonso’s sixth retirement this year.

“Disappointed for sure,” said the 41-year-old Alonso, who had expressed frustration with reliability woes hitting his number 14 car after another failure last month in Mexico.

“Millions of people are disappointed now. It´s the way it is, it has been a very unlucky season … not unlucky, I think we are not prepared reliability-wise,” added Alonso.

He pointed out other car failures that did not count as DNFs (did not finish) as they happened in qualifying or, for example, in the sprint race in Austria where his car could not start due to an electrical problem.

“So a little bit sad to finish like that but that´s the way it is,” he said.

In joining Aston Martin, Alonso is pairing up with an outfit that finished seventh out of 10 teams this year in the overall standings.

Still, set to slot into the car as early as Tuesday in the post-season test, he said he could not wait to get started. He expressed hope that the ill luck he had endured this season would be compensated for by better fortunes next year.

“That´s the best thing of today that it´s one day less to be in green,” he said.

“And tomorrow start with this project with the seat fit and meetings with a few people, then on Tuesday testing the car will be hopefully a good chapter and all the bad luck of this year hopefully compensate next.” (Reporting by Abhishek Takle)