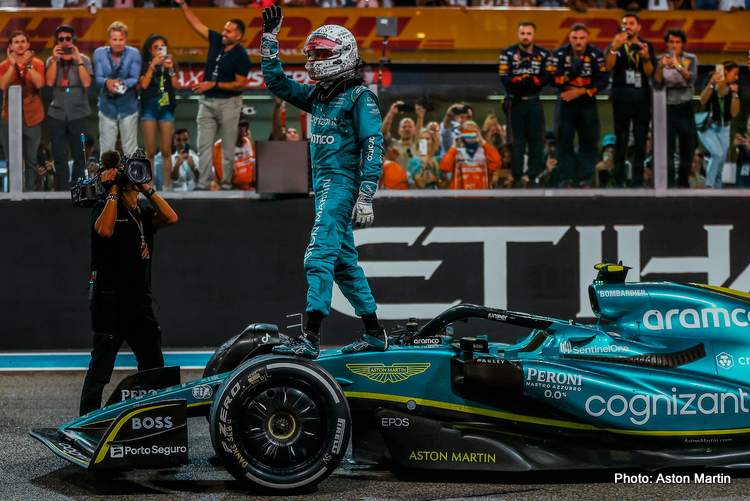 Four-time World Champion Sebastian Vettel said there was more to life than “racing in circles” as he brought the curtain down on his Formula 1 career with a points-scoring finish in Sunday’s season-ending Abu Dhabi Grand Prix.

The 35-year-old German raced his heart out from his ninth-place grid spot in his Aston Martin, engaging in a wheel-to-wheel battle with Alpine’s Esteban Ocon over several laps.

But he could do no more than pick up the final point on offer for 10th after his hopes of a bigger score were compromised by a one-stop strategy.

“I enjoyed the race,” said Vettel who capped a glittering career of 53 wins and four World Titles with celebratory tyre-smoking donuts on the start-finish straight.

“I think it was a bit of a different warm up today to get into the race but once the lights go off it’s full on race mode.”

Vettel’s impending retirement had triggered an outpouring of affection for the former Red Bull and Ferrari driver.

Tributes for the German poured in all weekend

The tributes have flooded in, with the German’s stand on social issues and the environment and his conduct with rivals, peers, colleagues and fans endearing him to many.

His family, including father Norbert and three children, usually kept away from the public glare of the F1 paddock, were in attendance for his final bow.

Having won his last Formula 1 Title in 2013 and last race in 2019, Vettel singed off from the sport a more popular driver than in his heyday.

“I don’t have that much more to say, I feel a bit empty to be honest,” said Vettel. “So many flags, so many smiling faces, which has been very, very special, very nice and I’m sure I’m going to miss more than I understand right now.”

Vettel called on the next generation of drivers to pick up where he left off. “There’s far bigger and far more important things than racing in circles,” he said.

“But obviously it’s what we love and through that if we can transfer some of the really important values, that’s big. So I hope to pass on a little bit to the other drivers to carry on some of the good work,” Vettel concluded. (Reporting by Abhishek Takle)

Putting on one last show for the fans.