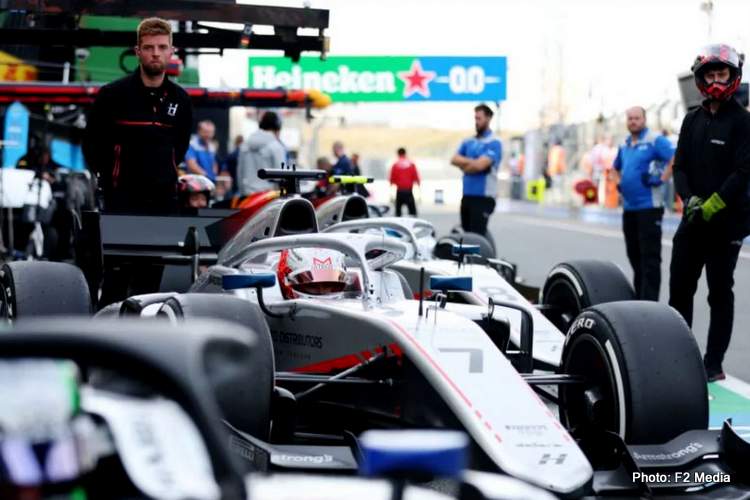 With the 2022 Formula 2 Drivers’ Championship already decided heading into the final double-header under the lights of the Yas Marina Circuit, the focus of the fans will be on which of three possible teams will bring home the Teams’ Title by the end of this weekend.

Brazilian Felipe Drugovich took home the F2 Drivers’ title with three races to spare. As an F2 ‘veteran’ experience and consistency were key to his success, as he scored solid points where his nearest rivals faltered through retirements and poor driving.

Nevertheless, there is still a fair bit to play for in the last round of the season. Here’s a preview of what you should be looking out for as the lights go out and the cars dance around in the dark, from the 18th to the 20th of November.

A tight Team tussle for the F2 finale at Yas Marina

Mathematically speaking, three of the 11 teams in the paddock have the possibility of clinching the Teams’ Championship in 2022. And it couldn’t be any tighter at the top.

Both MP Motorsport and ART Grand Prix are jointly in the lead on 281 points, with British outfit Carlin not so far behind on 258 points. With the Sprint race offering less points than the Feature race which takes place after it, the Championship will remain undecided until the end of the final race. We are bound for a nail-biting Title decider!

But which team has the greater momentum coming into Abu Dhabi?

It’s difficult to know for sure, but MP Motorsport’s Drugovich will be driving with no holds barred as he absolutely nothing to lose with his maiden F2 Title already secured.

His French teammate Clement Novalak has scored points in every race he has finished in the last five attempts and will be looking to continue this positive momentum to bring the Championship home for the Dutch team.

However, the ART duo of Theo Pourchaire and Frederick Vesti will be pushing to win some kind of silverware after a season in which either of them could have feasibly challenged for the Drivers’ Title. Vesti comes into the final round with a pair of back-to-back second-place finishes at Monza, whereas Pourchaire will be determined to have a much better weekend than he did in Italy, in which he failed to score any points.

A three-way tie with a lot to play for

Apart from the leading two drivers of Drugovich and Pourchaire, the Standings remain extremely close-fought and can change drastically over the course of the coming weekend. It is even possible that Dennis Hauger, who is currently in 11th on 98 points, could end up ahead of Logan Sargeant by Sunday evening, who is third with 135 points.

Particularly interesting is the fact that three drivers have an identical points tally heading into the last round of the 2022 season. Jack Doohan, Jehan Daruvala and Enzo Fittipaldi are fourth, fifth and sixth respectively, and all sit on 126 points.

If results in recent races are anything to go by, Daruvala may have the upper hand on the other two comparative rookies. He appeared on the podium at both times of asking in Italy, winning the Feature race in commanding fashion. The Indian driver is also the only contender of the three to win here previously; he won the first Sprint race last year on the same circuit.

However, Yas Marina Circuit is notorious for being quite a challenging track to overtake on, which means qualifying on Friday could be more important than ever. Taking this into consideration, Doohan looks best set to attain superior results, as the Australian has managed three pole positions this season while both Daruvala and Fittipaldi didn’t achieve a single one.

A couple of driver swaps and Correa is back in F2

Two drivers have been given the opportunity to race in the final round of this F2 season, before they get properly underway in 2023.

Maloney will be getting to grips with F2 machinery for the first time, and will be looking to impress the same team that he finished 2nd in the Drivers’ Standings for in Formula 3 this year.

Meanwhile, Correa will be stepping back into an F2 car for the first time since his horror crash at the fateful round at Spa-Francorchamps in 2019 in which he sustained life-threatening injuries.

Correa’s goal will most likely be to find his feet in a series where he had already proved himself once before and confirm a full-time role in the feeder series for 2023.

Who do you think will clinch the Teams’ Title this weekend? Who will win F2 in Abu Dhabi? How will the new drivers on the grid fare? Let us know what you think in the comments!