Norris: I did a good job with how I’ve been feeling 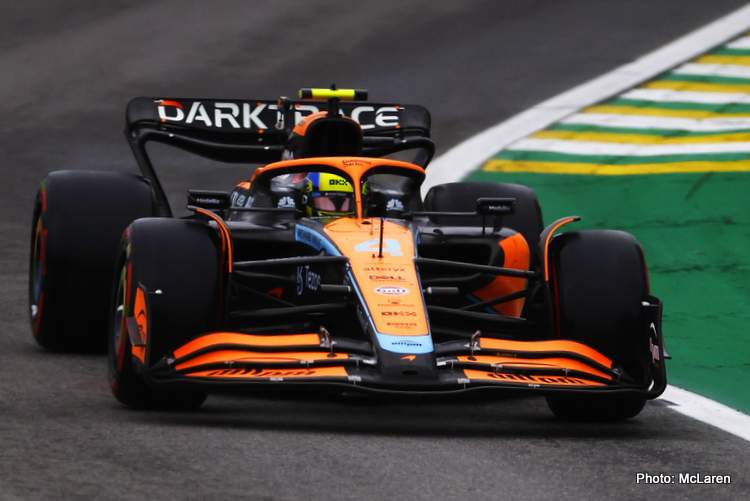 Lando Norris jumped into his McLaren on Friday in Sao Paulo still recovering from food poisoning, but is happy with the job he did to qualify fourth.

Norris missed his media duties on Thursday in Brazil, but was confirmed to be on driving duty come Friday, the Briton going on to deliver one of his best qualifying performances this season, fourth after the drama of Q3 that saw Kevin Magnussen take pole.

Norris seemed to be set for a decent result since the start of qualifying, as he was always featuring in the top part of the timing screens, and wrapped the shootout with fourth.

“I’m extremely happy with today,” he said in McLaren’s press release. “I think we did the best job we could have done throughout the whole of qualifying.

“I think the only thing we could have done a little bit better was going out first in Q3,” Norris reflected, “but there was also some risk to that. So, apart from that, we made perfect decisions, and the team did an excellent job.

Going on, the McLaren star said: “The car was feeling good, even in the tricky conditions. I was extremely happy to be P1, P5 and P4 through the qualifying runs. I feel like I did a good job all day, even with how I’ve been feeling – and maybe wasn’t driving as perfectly as I should have done.

“P4 is still a great position for tomorrow, so hopefully we can stay in that position and score some good points tomorrow,” the 22-year-old concluded.

A 14th on the other side of the McLaren garage

Daniel Ricciardo, on the other side of the McLaren garage finished an underwhelming 14th, struggling to find speed once the track dried out and the team bolted Soft tyres to his MCL36.

“It was a tricky session in tricky conditions,” the Aussie said. “It was quite fun to be honest, but we didn’t have the pace. So yeah, that was a little tricky just to get it out of the first timed lap for the peak of the tyre.

“When I heard some lap-times of some of the others I was not really sure if that was possible,” Ricciardo revealed. “I simply didn’t have the pace once we put the slick tyres on.

“We’ll try to make up for it tomorrow though. The good thing is we’ve got the Sprint race as well, so you’ve got two chances and hopefully we can make up some ground,” the Honey Badger concluded.

Ricciardo said he was planning to use the momentum from his seventh-place finish in Mexico a fortnight ago on the final two races of the season, but evident from his qualifying in Sao Paulo, it seems that momentum has evaporated over the break.

The final race in Formula 1 can’t come soon enough for the likeable Australian.