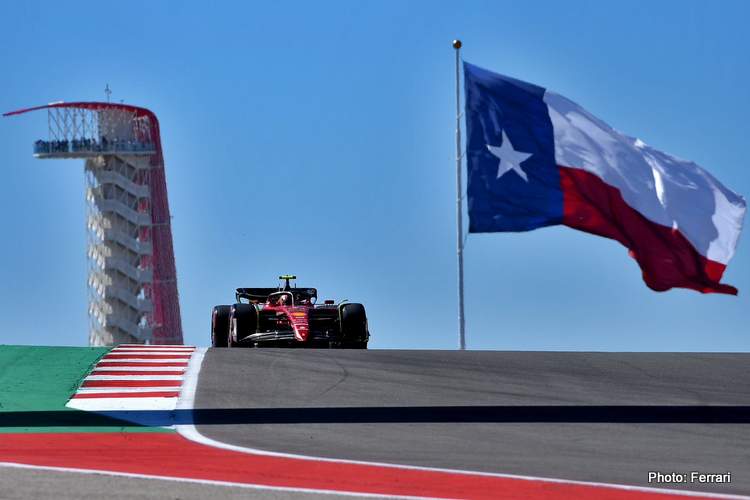 It was a drama free session, and in the end Carlos Sainz went fastest of all with a lap time of 1:36.857, as Max Verstappen had to settle for second fastest, 0.224s off the pace.

Seven-time Champion Lewis Hamilton was third fastest in the upgraded Mercedes, 0.475s down on Sainz’s time in the Ferrari.

Formula 1 lands stateside as the 2022 season heads towards its final four races, starting with the United States Grand Prix in Austin this being its tenth iteration.

Part of the excitement is understandably gone, as Max Verstappen wrapped up the Drivers’ Title at the 2022 Japanese Grand Prix at Suzuka a fortnight ago, but with the Red Bull cost cap breach subject still not close to any conclusions, intrigue and controversy were in abundancy at the Circuit of the Americas (COTA).

Also there is still the Constructors’ Championship to be secured, but it is only a matter of time until Red Bull bag that one as well, their first since 2013.

With the bumpy nature of COTA, it will be interesting to watch out how the 2022 F1 cars fare with their firm suspension settings and tendency to bounce.

Mercedes announced that they are bringing their final upgrade package for their W13, and despite the team insisting it won’t be a game changer, the Silver Cars would be worth monitoring to see how perform.

This is going to be a busy opening session at Austin. 😅

We’ve got tweaks to the floor and rear-wing of the W13 this weekend.

Lewis fitted with aero rakes on this opening run, collecting data as we continue our learning for 2023. 📊 pic.twitter.com/WPioucdGaN

There were some driver changes for FP1 at COTA, with Logan Sargeant making his second F1 appearance with Williams replacing Nicholas Latifi. He first drove an F1 car with Williams in Abu Dhabi last year during the post-season test.

Charles Leclerc will make way for Robert Shwartzman at Ferrari, while Alex Palou will take over Ricciardo’s McLaren.

Theo Pourchaire will deputize for Valtteri Bottas at Alfa Romeo and Antonio Giovinazzi will replace Kevin Magnussen at Haas.

Old friends and new are joining us for FP1!

As mentioned, Mercedes are debuting their final upgrade package in Austin, and that includes a new front wing, floor fences, floor edge and rear wing end-plate.

Mercedes brought only one new wing to Austin, as the team would not have enough time for back to back tests with the tyres test scheduled for FP2.

Just ahead of FP1, it was confirmed that Charles Leclerc will be taking a new power unit, meaning a start from the back of the grid for the Monegasque. Carlos Sainz is also expected to have new components and a grid drop as well.

But 10 minutes into the session, Giovinazzi binned the Haas at Turn 6 bringing out the first Red flag of the weekend, but was able to get going limping back to the pits. Magnussen won’t be happy with this.

We have a brief stoppage, as Antonio Giovinazzi spins into the wall at Turn 6

He gets the car out of the barrier and is en route back to the pits#USGP #F1 pic.twitter.com/btDPiXXmr3

It was a brief Red flag, and running was soon underway again, Verstappen out on Soft tyres for a push lap going to the top of the timing screens with a 1:38.272.

It was also reported that Sergio Perez and Zhou Guanyu will get new Internal Combustion Engines, their fifth for this season, and will incur the consequent grid penalties.

Giovinazzi seems to have caused some considerable damage to Magnussen’s VF-22, as Haas reported a clutch damage, meaning the Italian’s session was over.

The accident caused damage to the clutch, which will need repairing, so Antonio’s #FP1 session is over. #HaasF1 #USGP pic.twitter.com/6mSLkXqyBZ

It wasn’t the session Shwartzman was hoping for as he suffering an issue with his seat, meaning he had to spend some time out of the car as Ferrari padded his seat.

Alex Palou was given some advice from his engineer on how to apply the brakes at corner entry, to which he responded: “I just get there too fast… This car is insane.”

As mentioned, Carlos Sainz went around the COTA fastest with a 1:36.857, as Max Verstappen was 0.224s slower in the Red Bull.

Mercedes’ Lewis Hamilton was third fastest in the Mercedes, 0.475s slower than Sainz, as Lance Stroll was a surprise fourth for Aston Martin, 0.128s behind the Briton.

Sergio Perez was fifth fastest in the other Red Bull, 0.658s off the pace, followed by Fernando Alonso in the Alpine, sixth and 0.198s further down the road.

George Russell was seventh in the #63 Mercedes, 0.470s off his teammate’s pace, as Pierre Gasly went eighth fastest, 0.008s behind the Briton.

Lando Norris was ninth fastest in the McLaren with a 1:37.856, and was followed by Sebastian Vettel, tenth fastest and 0.185s behind the #4 McLaren.

Fastest of the replacement drivers was Robert Shwartzman, 16th in the Ferrari, followed by Alex Palou, 17th fastest in the McLaren.

Theo Pourchaire was 18th fastest in the Alfa Romeo, while Logan Sargeant was 19th in the Williams. 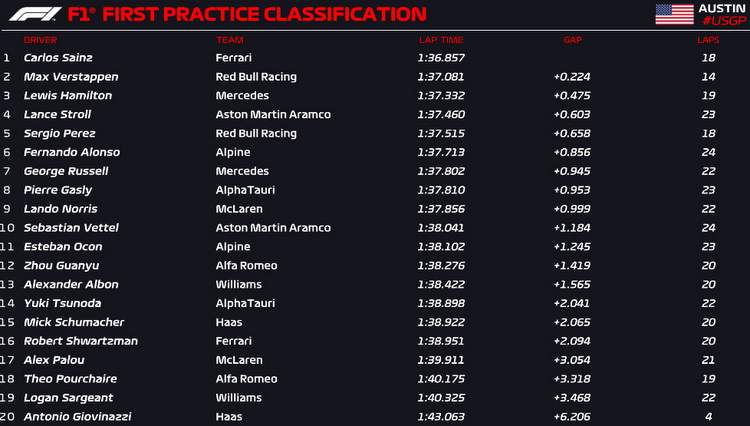