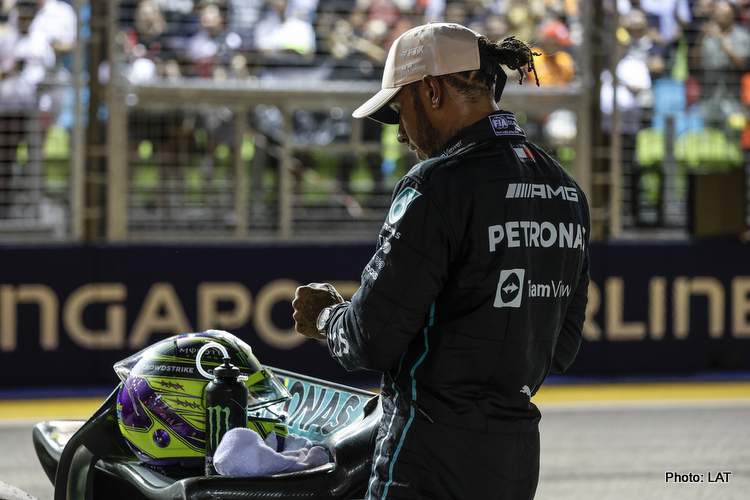 Lewis Hamilton insisted it is imperative that the FIA severely punishes any team found to have breached the cost cap mandated in Formula 1 starting 2021.

The cost cap breach saga has been grabbing headline for over a week now, and a conclusion should’ve been reached on Wednesday, but the FIA announced that no further information will be revealed on the matter before Monday October 10, 2022.

With Red Bull being allegedly one of the teams who have breached the cost cap in 2021, and given the tight fight they had with Mercedes last year when Max Verstappen was crowned Champion, it was natural that Lewis Hamilton is asked about the subject.

Asked by the media in Japan ahead of the race this weekend, if “severe punishment” should be applied on any team found to have breached the cost cap, Hamilton responded: “It’s imperative.

“For transparency, we need to continue to have transparency of the sport, the integrity of the sport,” he added. “I don’t think I know enough about it but I know there are lots of conversations going on in the background.

“No one truly knows, there are different numbers and different things being said. Like you, I was expecting those results to come out yesterday,” the Briton pointed out.

“I would like to think if it’s been delayed then it’s being taken very seriously, and I really trust that Mohammed [Ben Sulayem – FIA president] will do what is right for the sport.

“It would be bad for the sport if action wasn’t taken if there was a breach, but I don’t know if there is. I’m waiting like you,” the seven-time F1 Champion maintained.

In 2021, the budget cap ($145-Million) was applied for the first time as teams had to juggle the development that year’s cars and the new ones for 2022 designed for the new regulations – ground effect and 18″ low profile tyres.

So teams had to be very efficient in their development programs, and as the Title fight went down to the very end, the final lap of the final race in Abu Dhabi, Hamilton was quizzed if he a cost breach would be a further cause of concern to him.

He said: “For sure, because then it would put in question our values, the integrity of the sport. As a driver, you are always asking for updates, updates, updates, and I remember at Silverstone [last year] we got our last update.

“It was almost three-tenths, but I remember after that needing more updates but then seeing trucks…updates continuing to arrive on the other car and thinking ‘Jesus! It’s going to be hard to beat them in the championship if they keep bringing updates’.

“It’s so integral to the development race,” Hamilton insisted. “If we’d had another half-a-million to spend we would have been in a different position at some of the following races if we’d brought another floor, which we could have easily done.

“But that’s not the name of the game and I’m grateful our team is very strict with the way we work and they did an amazing job. It is to be taken seriously,” the winner of 103 grands prix concluded.