Sainz: The race was unfortunately quite lonely 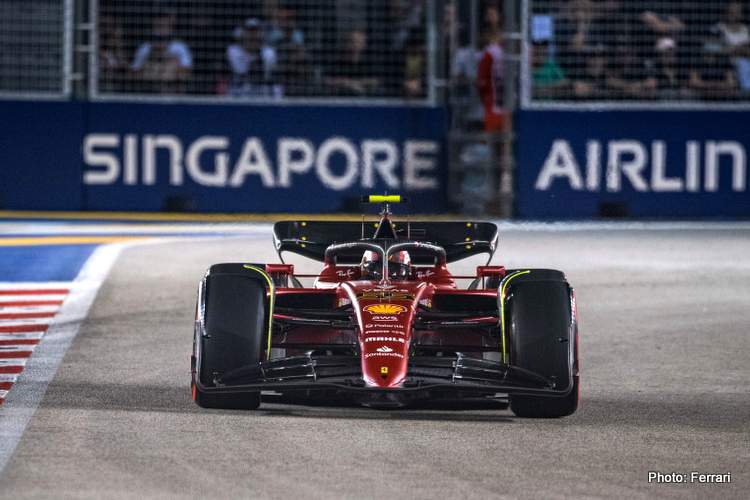 Carlos Sainz admitted he lacked the pace to keep up with the leaders during the 2022 Singapore Grand Prix which ended up being quite lonely race.

Sainz started the Singapore Grand Prix third on the grid, but his early stint on the Intermediate tyres saw him struggle for pace, as he lost touch with teammate Charles Leclerc and Red Bull’s Sergio Perez who were in a league of their own.

Instead the Spaniard spent his time fending off the attacks of Mercedes’ Lewis Hamilton, that is until the Briton made an error on lap 33 hitting the barriers at Turn 7, dropping down and giving the Spaniard a breathing space.

Later on dry tyres, Sainz was briefly challenged by Lando Norris after the Safety Car restart, but the McLaren driver’s challenge faded and his former teammate went on to take third.

“It was unfortunately quite lonely for me because I just didn’t have the pace,” Sainz told Formula 1’s Official Website of his race on Sunday.

“Today [Sunday] on the intermediate tyre, I lost a lot on the road to Charles and Checo. I couldn’t keep up with them. I was struggling quite a lot on these tyres.

“I think I lost quite a bit the front and I was having a lot of moments, a lot of front locks, and every moment here costs you confidence and costs you the ability to recover that pace,” he revealed.

“At one point I had to settle a bit and recover that confidence because I couldn’t keep up and once the confidence recovered in the slick and towards the last 10-15 laps, I managed to be quick, but it was just way too late,” the Ferrari driver lamented.

The Marina Bay Street Circuit is infamous for the physical strain it put on F1 drivers with extreme humidity and elevated temperatures, but Sainz was adamant he wasn’t physically challenged, insisting confidence was the key to a strong result.

“I don’t feel like the track is physical at all,” he said. “It’s usually warm in the car but this is not a problem because the physicality of it is much lower [in wet conditions]; it was just a matter of pure, pure pace and confidence.

“I think here confidence is key,” Sainz pointed out, “and when you have a couple of moments, it snowballs and then you have to take a bit more margin and then you start losing extra pace compared to other tracks because next time around, you might be in the wall and you might look like an idiot.

“So, it’s a confidence thing that I will work on, I will have a good look with my engineers to see what I could have done better, what we can do in these sort of conditions, because [mixed conditions] is one of my strongest points as a driver.

“And I think it’s going to be only a one off,” the the 28-year-old from Madrid maintained.