Russell: We were in no man’s land 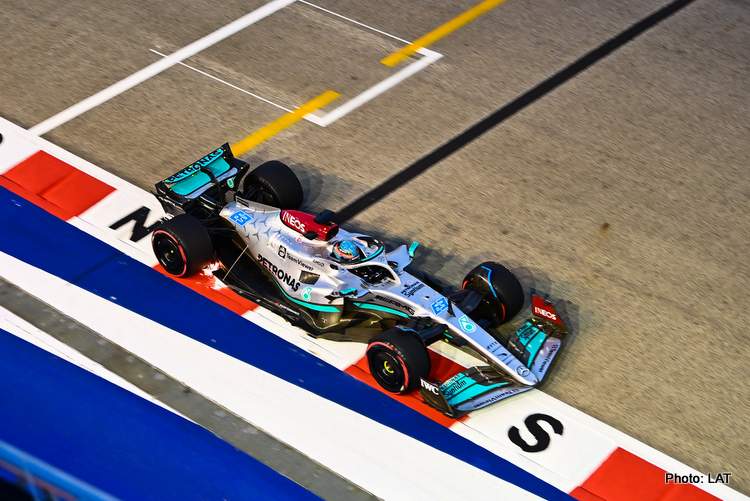 George Russell and Mercedes tried out lots of stuff during the 2022 Singapore Grand Prix, and the Briton feels it was worth it as they were in no man’s land.

George Russell had an off weekend in Singapore, always playing catch up with teammate Lewis Hamilton who qualified third for the race, Russell only 11th.

Mercedes then chose to break parc ferme conditions on the #63 Silver Arrow, which meant Russell had to start his race from the pitlane, facing an uphill task to make places up the grid, something that proved to be quite an ask.

As they had nothing to lose, the team tried different strategies with the Briton, like switching him to dry tyres before the rest of the field which initially fired back, but the race came back to them as the track evolved.

However Russell and the Haas of Mick Schumacher touched causing a puncture for he former’s car ruining all the hard work he did.

Russell reflected on his race with Formula 1’s Official Website; he said: “We were in no man’s land, to be honest.

“Potentially it was [worth switching to slicks], because at the restart we were flying – I overtook three people on one lap after the Safety Car.

Russell’s tangle with Schumacher cost him a points finish

“[Then] I had the tangle with Mick… I don’t really know what happened there; I felt like I left him plenty of space,” he recalled. “We would have probably finished inside the points, because we were flying and got the fastest lap at the end by almost two seconds.”

Russell suffered from practice with car problems, where his car felt as if it was still pushing, as if he was “picking up the throttle”, which he blamed for his Q2 exit in qualifying. The problem was sorted out for the race.

“I’m pleased that the issues from yesterday and FP1 have been resolved,” he said, “and I guess a bit of confidence [has been] restored that I haven’t lost it and I didn’t qualify three seconds off the pace due to a lack of talent.

“We’re making loads of progress as a team, that I’m proud about,” Russell continued. “We’re here to win races; points are always great.

“We’ve had a very good run of results and this is probably the first weekend as a team, bar Silverstone, that we slipped up, myself included – [but] that’s how it goes,” the one-time pole sitter maintained.