Hamilton: All went out the window when I locked up 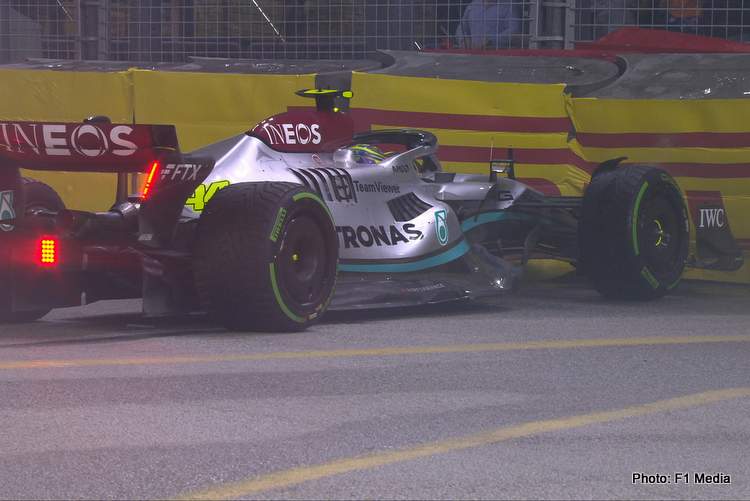 Lewis Hamilton had a decent chance to deliver a strong result at the 2022 Singapore Grand Prix, but admits all went out of the window when he locked up trying to overtake Ferrari’s Carlos Sainz.

Hamilton looked in good form during qualifying in Singapore, holding provisional pole at some point, but in the end he had to settle for third on the grid.

Starting the race, the Briton lost a position running wide while fighting with Carlos Sainz, and was stuck behind him until he locked up at Turn 7 trying to overtake the Spaniard, and then messed up a pass later during the race fighting Sebastian Vettel for seventh place.

“I think we started off with a pretty decent weekend and it was just really unfortunate at the end, no matter how hard I was trying it was just not possible to overtake,” Hamilton said.

“Today was about who gets on the slicks first and it would have been slice and dice with Carlos, which I was working towards,” he added. “But that went out of the window when I had that lockup going into Turn 7.

“Your heart sinks a little bit, but you get back up again and try,” the seven time Formula 1 Champion admitted. “My apologies to the Team, it’s a shame we didn’t manage to secure more points today.

“But we live, we learn and we will recover. We have lots to review from this weekend and I’m looking forward to Suzuka,” Hamilton concluded. 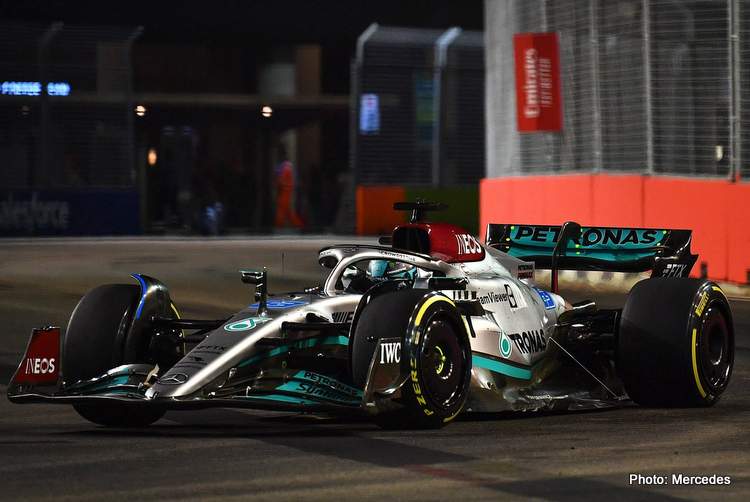 George Russell had to start his race from the pitlane after Mercedes did some changed to his car under parc ferme, and he suffered a miserable race languishing down the grid to finish 14th, the last of the cars that finished – six cars retired.

Russell also made contact trying to pass Mick Schumacher in the Haas, suffering a puncture sending him back to the pits for fresh rubber.

Russell reflected on his race in the Mercedes’ post race press release; he said: “We took a risk today going on slicks and it could have paid off with the Safety Car but then I had the incident with Mick.

“I don’t know what happened, we need to review it,” he added. “I’m disappointed we didn’t score any points this weekend, but I’m pleased that the issues with the brakes we experienced in FP3 had been resolved and our confidence restored.

“We showed how fast our car can be and I’m still proud of the team because we are making good progress. I got a lot of confidence and optimism from today that we do have a competitive car,” Russell insisted.

“It was an enjoyable race although out of the points – I like the challenging conditions that Singapore brings, but obviously we want to finish much higher up.

“We have lots of work to do ahead of Suzuka but it was positive to experience the car’s potential today,” the young Mercedes driver concluded. 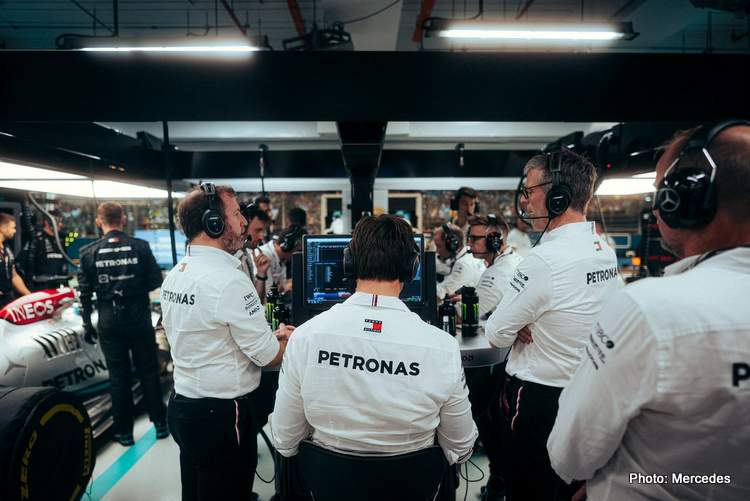 Mercedes team boss, Toto Wolff reflected on a tough lesson his team learned in Singapore; he reflected: “This season has given us several tough lessons – and today was another one.

“We started from opposite ends of the grid with our two cars, but we couldn’t capitalise on the car’s race pace with either of them, when it came to an end result,” he lamented.

“Lewis was fighting for the podium for much of the race – but also battling a car balance that was on a knife edge today, in difficult conditions and on the bumpy surface.

“After he locked up and damaged the wing, the stop to change tyres and the nose cost him position – then he lost out even more when cars ahead pitted under Safety Car and jumped ahead. That left him stuck in a train of cars on very similar aged tyres, and he couldn’t make up any ground.

“For George, we rolled the dice on dry tyres when he was running out of the points – in hindsight, it was clearly too early, but he had nothing to lose, so we were prepared to take the gamble,” Wolff said of the #63 Mercedes’ race.

“Even so, as the race unfolded, he was still on course to make it back to the points until the collision with Mick, which put him last on the road.

“The biggest frustration today is that we couldn’t build on the signs of competitive performance we saw in FP2 and in Qualifying.

“Our championship fight for P2 has got significantly more difficult with this result, but the only thing to do is to collect ourselves and throw our energy into the next race in Suzuka to rebuild momentum,” Wolff concluded.