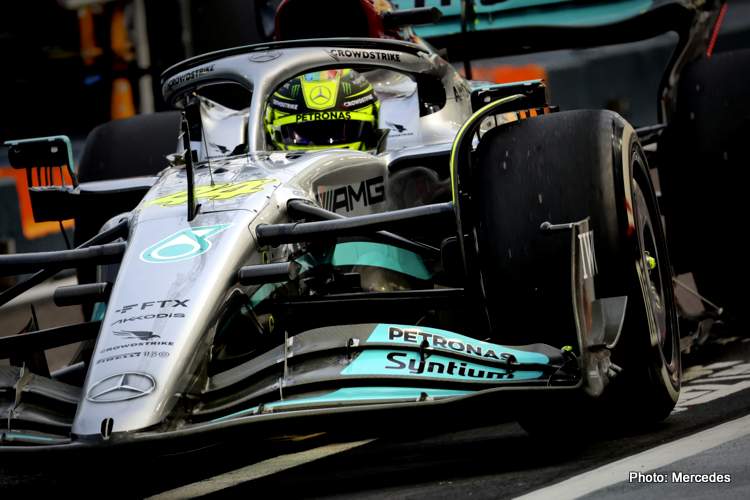 Lewis Hamilton had what he called an “okay” first day of practice for the 2022 Singapore Grand Prix but nevertheless believes they are not too far off the pacesetting Ferrari duo this weekend.

With Formula 1 back on the Marina Bay streets after a two-year COVID-19-induced absence, it also seems that Mercedes may be back at the sharper end too as Hamilton topped the timing screens at the end of FP1 on Friday, and then P5 in the later FP2 session.

George Russell in the sister car ended the day third quickest, 0.324s shy of the top time and a quarter second up on his teammate in the other Sliver car. But it’s close at the top, a mere six-tenths covering the top five with Ferrari driver Carlos Sainz fastest of all by a couple of tenths.

Hamilton said in the Mercedes team report: “Today started off well with FP1, but wasn’t as great in the second session. The car is what it is and we’re bouncing around a lot, but it doesn’t feel like we’re massively off this weekend.

“There’s not too much we can do about the stiffness of the car with the tools we have, but set-up wise we can find more time. With the set-up that I had today, there was a lot of locking, which we will fix it tonight so we can come back and give it a better go.

“Conditions here are tricky, I definitely feel dehydrated after the sessions, a bit heavy and very hot. But biggest problem is not the physical challenge so much as getting the car in the window for qualifying. I’m hoping we can be P5, P4 – something like that.

“If we can get any higher, that would be amazing,” reckoned Hamilton who has been on pole four times in the 12 years of the race, and won it four times too; this year he and Mercedes have not scored a win and it’s the longest he has been without a win during the course of a F1 season. 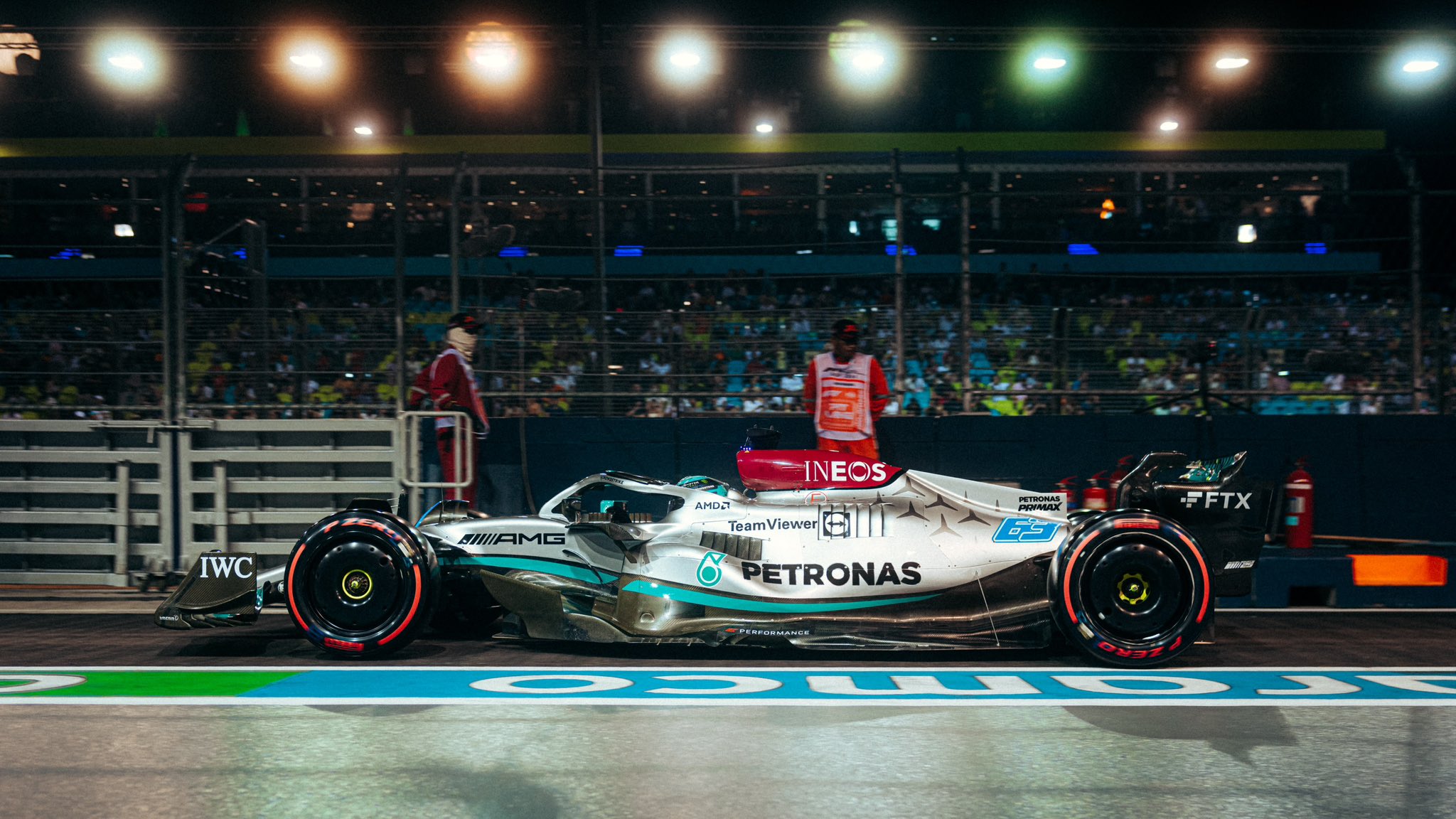 In the other Mercedes, Russell, who familiarised himself with the escape roads, providing sanctuary from the stiff concrete but frustrating as was obvious over his team radio when the car did not stop on demand.

He said afterwards in the TV pen: “There’s definitely a lot of work to do. It’s very, very bumpy out there. I think everybody’s struggling to a degree. We’ve always been a bit of a weak point with our car.

“I think it’s going to be one of those [weekends] that if we can absolutely nail it, there’ll be a huge amount of lap time we can find come qualifying – and as we know, it’s normally a qualifying race [here]. We’ll stay optimistic and work hard overnight.”

Later, Russell added in the team report: “On paper it’s been a promising day for us, but paper doesn’t mean anything. Overall, today went okay, but it’s just so hot and you always feel a bit light-headed jumping out of the car.

“The track surface is very bumpy out there and I think to a degree everybody is struggling with that. We know that that’s a weak point with our car plus the tires here are quite sensitive. I was surprised about the grip levels on the new track surface and I’m sure track improvements will continue to evolve during the weekend.

Shovlin: It looks like the car has potential for a decent result here 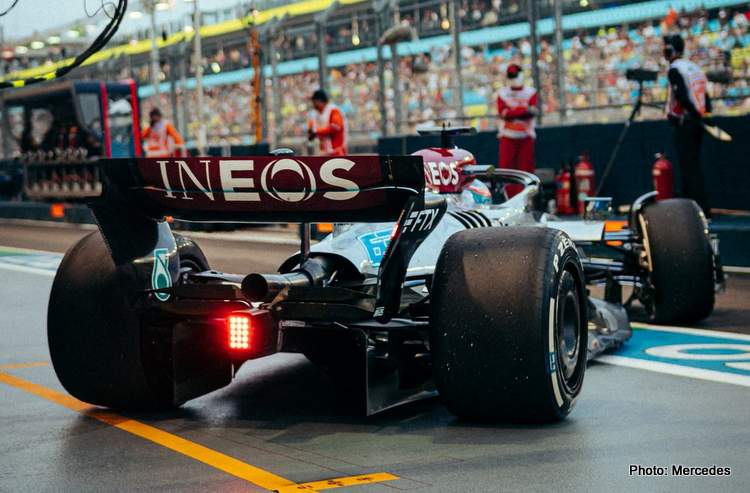 Mercedes trackside boss Andrew Shovlin gave the team’s perspective: “It’s great to finally be back in Singapore, but it’s a difficult circuit and the three-year break since we were here last doesn’t help in terms of understanding where to go on setup or knowing how the tyres are going to behave.

“We’ve had a pretty clean couple of sessions, especially comparing to Red Bull and Ferrari who looked to have a few issues, but we have managed to get through the majority of the planned work. The car was a bit better balanced in the first session and seemed easier to put the times in.

“In the second session we picked up a bit more locking and neither driver got a particularly clean lap in, so hopefully we’ll be able to make a bit of a step there overnight. Overall, though, it’s been a decent start to the weekend and it looks like the car has potential for a decent result here,” predicted Shovlin.

Mercedes can salvage second place this year if they can close the 35-point gap in the remaining six races but with their runner-up rivals, Ferrari, hogging the top spots on the timing screens on Friday evening in Singapore, it will be a challenge for the reigning F1 World Champions.

Russell lies fourth in the 2022 F1 drivers’ standings, seven behind third-placed Sergio Perez of Red Bull and 16 behind Ferrari’s Charles Leclerc; Hamilton is sixth 35 down on his teammate.

This weekend at the Singapore Grand Prix, mathematically,  Max Verstappen and his team could wrap-up one or both F1 titles should the stars align, whatever the case with six races remaining the final destination of the Big 2022 F1 Trophies is sure to be Milton Keynes and/or Max’s pad in Monaco.