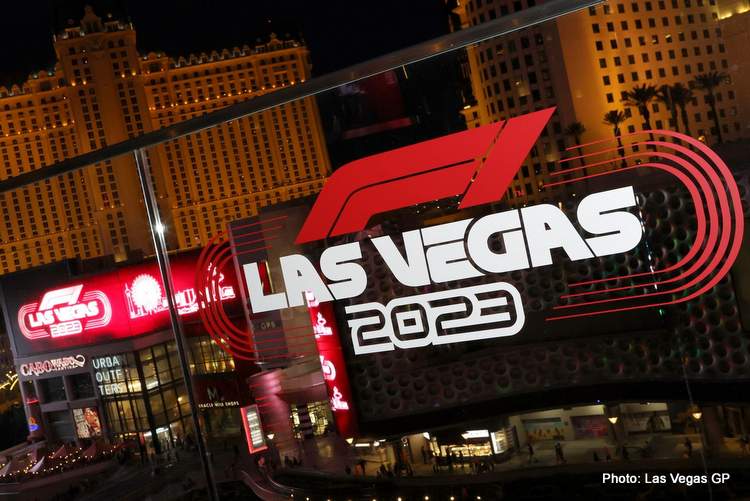 The 2023 Formula 1 Las Vegas Grand Prix will be launched with an all-day and free launch party that will be held on the fifth of November.

The Las Vegas Grand Prix is the latest addition to the F1 calendar and will be part of the record 24-race calendar the sport announced for 2023.

The race will be held on the famous Las Vegas Strip, on October 22, 2023 as a night race on Saturday night as opposed to F1’s traditional Sunday races.

Formula 1 announced today that it will bring its adrenaline-fueled Launch Party to Caesars Palace in Las Vegas on Saturday, November 5, 2022, from 11a.m. to 11p.m. – just over a year before the race on November 18, 2023.

Bringing together the spectacle of Formula 1 with the high energy of the Las Vegas Strip, the free Launch Party at Caesars Palace includes exciting activations and events designed to thrill guests throughout the day.

Several Formula 1 race teams and drivers will be represented at this historic event, where fans can hear the roar of the engine, smell the burning rubber and witness the power of the cars up close and personal as drivers hit high speeds in front of some of the world’s most iconic landmarks.

Additionally, fans can enjoy pulse-racing activities, including the Formula 1 Pit Stop challenge – where they get a hands-on experience and can attempt to swap a Formula 1 car’s wheels in under three seconds – as well as Formula 1’s Esports simulators – which offer fans the chance to race head-to-head on the official Formula 1 game – along with additional activations, car and trophy photo ops, and giveaways.

To add to the excitement, the first 500 fans (ages 21 and older) to attend the Launch Party festivities will get their chance to score exclusive access to a complimentary ticket for a private VIP celebration taking place that night at Caesars Palace featuring an intimate performance by The Killers.

The line-up of festival activities include:
• 11:00 – The Launch Party begins with the Pit Stop Challenge, Esports Simulators, activations, car and trophy photo ops, and more in the Fan Zone at Caesars Palace
• 17:50 – Live Car Run on Las Vegas Boulevard with drivers from Oracle Red Bull Racing and Mercedes-AMG Petronas F1 Team
• 18:30 – Drone Show above Caesars Palace
• 18:45 – Introduction of drivers and teams on the Main Stage
• 23:00 – Official afterparty with Alesso at OMNIA Nightclub

For a full overview of what to see and where to go, visit f1lasvegasgp.com/launch-party.

Tickets for the 2023 Las Vegas Grand Prix will go on sale soon. To receive further information, F1 fans can
sign up for updates at f1lasvegasgp.com.

Stefano Domenicali, President and CEO of Formula 1, said: “We are thrilled to welcome our fans to the launch of the 2023 Las Vegas Grand Prix.

“The Las Vegas Grand Prix is going to become a regular fixture in the city and on the global sporting calendar, so it is important to have local fans both celebrated and celebrating with us from the very start.

This launch is a small but exciting taste of things to come over the next year when all the Formula 1 teams hit The Strip,” he added.

Jim Gibson, Chair of the Clark County Commission and LVCVA board member, said: “Las Vegas has become ‘The Greatest Arena on Earth’ because of the high-caliber, world-class sports and events fans can experience throughout the destination, and Formula 1 is the perfect addition to that arena.

“The high-octane energy of the Las Vegas Strip will provide the perfect backdrop for the 2023 Las Vegas
Grand Prix. We are thrilled to welcome Formula 1 fans to Las Vegas and look forward to celebrating the sport
together,” he explained.

Marilyn Kirkpatrick, Clark County Commissioner, said: “No destination is better prepared than Las Vegas to host an international event of the caliber of the Las Vegas Grand Prix.

“We look forward to showcasing our world-class travel and tourism facilities and customer service, and making this race the shining star of the Formula 1 schedule,” she concluded.