Ocon: Only Hamilton did a better job than me against Alonso 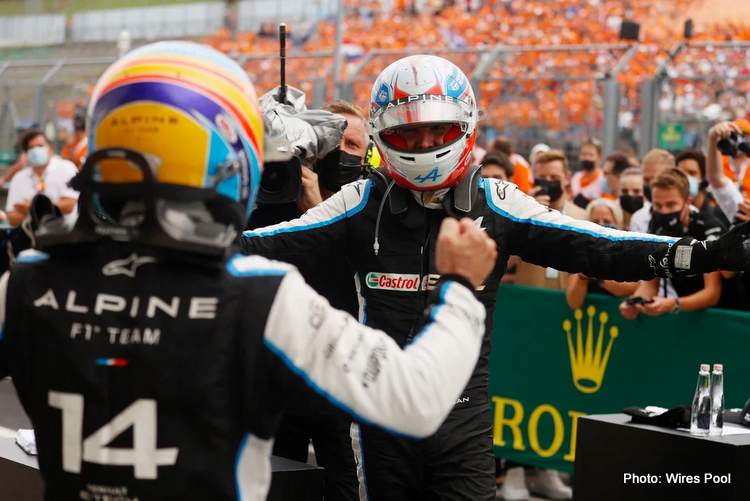 Esteban Ocon is happy with how he fared against teammate Fernando Alonso, claiming only Lewis Hamilton was able to beat the Spaniard during their infamous 2007 Formula 1 season at McLaren.

Alonso has a reputation of destroying teammates, and many though the same fate would befell Esteban Ocon when the double F1 Champion joined him at Alpine in 2021.

However the Frenchman has held his own well against his formidable teammate, and was the one who delivered the team’s first win under the Alpine moniker at the 2021 Hungarian Grand Prix.

With Alonso leaving the team in 2023 to join Aston Martin, Ocon will now assume the team leader role at Alpine who are yet to announce his teammate for the next season.

Speaking to Motorsport.com, Ocon spoke of the conceptions that surround him, saying: “I don’t read everything that is said about me, but I hope that when I do something good, it is reported as such, and that others can get an idea.

“But it is true that there are some people who say to me ‘ah, I didn’t notice your qualifying at Spa’, or ‘I forgot you won last year’. I admit that I find it a bit strange.

“In the end in qualifying, compared with Fernando, it is 9/7 to him, but I have a few more points in the standings [Ocon has 66 points, Alonso 59]. Last year, if we talk about qualifying, we finished the season in a draw: 11 to 11.

“If I look at Fernando’s career, the only teammate at his level was Lewis. Everyone else has not done better than me,” the 26-year-old pointed out.

“Personally I feel that I am doing a good job, yes. So it is a bit strange at times to see that on the outside there are those who perceive in a slightly different way,” he admitted.

As a reminder, Hamilton and Alonso had a tumultuous 2007 season together at McLaren, when the former was still a rookie.

Hamilton ran his established double champion teammate very close, as they finished their season equal on points with the Briton ahead in the standings, after a season-long bitter rivalry.

Many predicted Ocon would met the same fate as Alonso’s other teammates – getting destroyed – but when asked about such reports, he said: “Yeah, I heard it too, but I’m still here, right?

“It is a nice comparison from where we started last year, both in qualifying and in the races. Fernando is very, very fast.

“I don’t think he has anything to prove to anyone. To those who say if I have learned from Fernando, I answer ‘certainly’. But I hope that he too could have learned something from me,” Ocon added.

However, the Alpine driver is wary of taking it easy despite having a contract with Alpine up to 2024, as nothing is guaranteed in F1.

“I understand that there is nothing guaranteed in Formula 1,” he said. “Even if you have won a race, even if you have stood up to a double world champion like Fernando, you are not sure of having a guaranteed future.

“We have the example of Daniel [Ricciardo],” Ocon referred to the Australia who lost his McLaren seat despite having a contract for 2023.

“Two years ago, he was in the top-driver group and today he doesn’t have the guarantee of a seat for next season. You must always be at the top, and be sure to never give up,” the one-time race winner insisted.