Alonso paid McLaren mechanics to support him not Hamilton 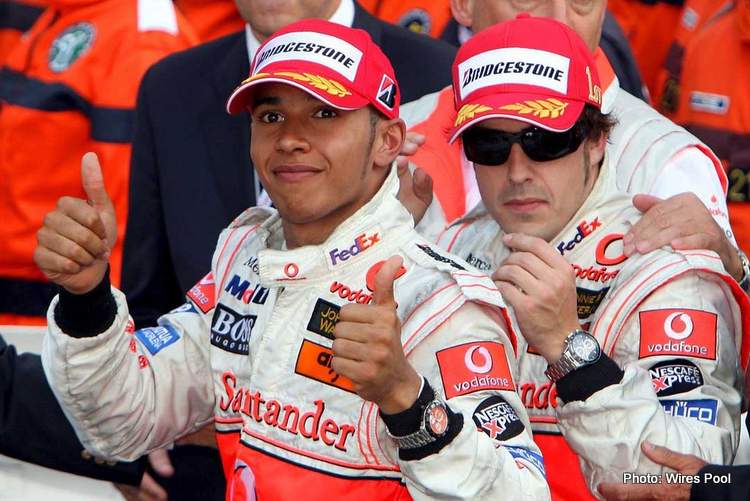 Much has been written and said about the infamous 2007 Formula 1 season that saw Fernando Alonso and Lewis Hamilton share the McLaren garage, but now some juicy details have been revealed by a former McLaren mechanic claiming the former paid mechanics for their loyalty.

The 2007 season was a tumultuous one for McLaren, as the team struggled to deal with the animosities between Fernando Alonso, then a reigning double F1 Champion, and Lewis Hamilton who was making his debut in top flight as a rookie.

They slugged it out on track, and resorted to various tactics as they fought for superiority within the team, especially and Hamilton surprisingly ran his established teammate close throughout the season, which the finished equal on points, but Hamilton ahead on the standings.

Their season-long bickering helped Ferrari’s Kimi Raikkonen edge them and take the Title by one point only, in a season when McLaren were disqualified from the Constructors’ classification and lost their points after the Spygate, as the Woking team was found to be in possession of confidential Ferrari design documents.

That’s all known and well reported, but new details were revealed by former McLaren mechanic Marc Priestly – speaking to the PitStop podcast – regarding 2007 and some tactics Alonso resorted to in his fight with Hamilton.

“One of Fernando’s tactics is to try to bring the whole team on his side of the garage,” Priestley said. “In 2007 there was a moment when he showed up for a race and when I arrived the manager or his coach was handing out small brown envelopes full of money to anyone who wasn’t in Lewis’s car.

“I remember opening the envelope and there was about 1500 euros,” he revealed. “It was all so shady. First of all, you are given an unmarked brown envelope and you say, ‘Thank you very much, what is it?’. Then the preparer leaves and you are left with this thing, you open it and it is literally full of cash.

“Suddenly the news started spreading around the team and the only ones who hadn’t received anything were the members of Lewis’s team.

“Eventually the team found out and made us donate the entire amount to charity , which went well, but it was a little hint to understand the two different mentalities,” Priestly reflected.

Alonso surprisingly returned to McLaren for the 2015 season, where he spent four miserable seasons toiling around at the back of the grid with a subpar chassis and underpowered Honda and Renault power units.