Are Latifi’s days in F1 numbered or will money talk? 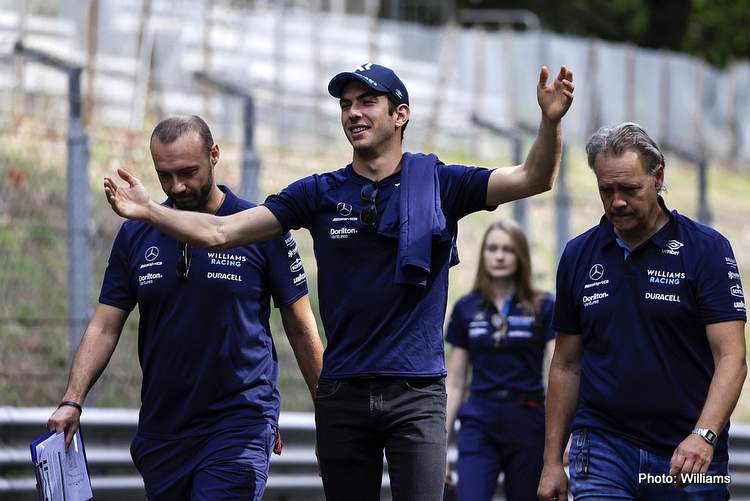 Nicholas Latifi admits he had no fun during the 2022 Italian Grand Prix, no surprise as he was outshone by a driver that stepped into the Williams the day before he had to race it, begging the question in the headline about the Canadian.

Nyck de Vries, inadvertently, underlined what we all suspected if not known: Latifi is not Formula 1 driver material. He had his chance to prove himself at the highest level and failed – quite miserably – to live up to any of his teammates – George Russell and Alex Albon – and now one-race-wonder De Vries.

Monza epitomised why exactly Latifi has no place among the elite. Granted, like any driver who makes it into F1, and does a season or more, respect is due to the 27-year-old for ticking the boxes in the junior formulae as he did; albeit, thanks to the millions his billionaire father has forked out for his son’s dream.

But he got to F1 and on that stage he has been able to show what he has got, and of course, what he hasn’t got.

Now 55 starts into his his career in the top flight, Latifi’s reality is obvious for all to see, the lashing from regular driver Alex Albon, the humbling now received from De Vries are a clear message that he has not got it to be in F1 beyond this season.

Add to that the numerous incidents he has been involved in, the countless crashes last season and this season. His Abu Dhabi shenanigans altered F1 history last year; this season he has had near misses with just about every driver on the grid, he spun behind the safety car, crashed in qualifying, crashed in practice etc.

Many times Latifi does not know why he crashes 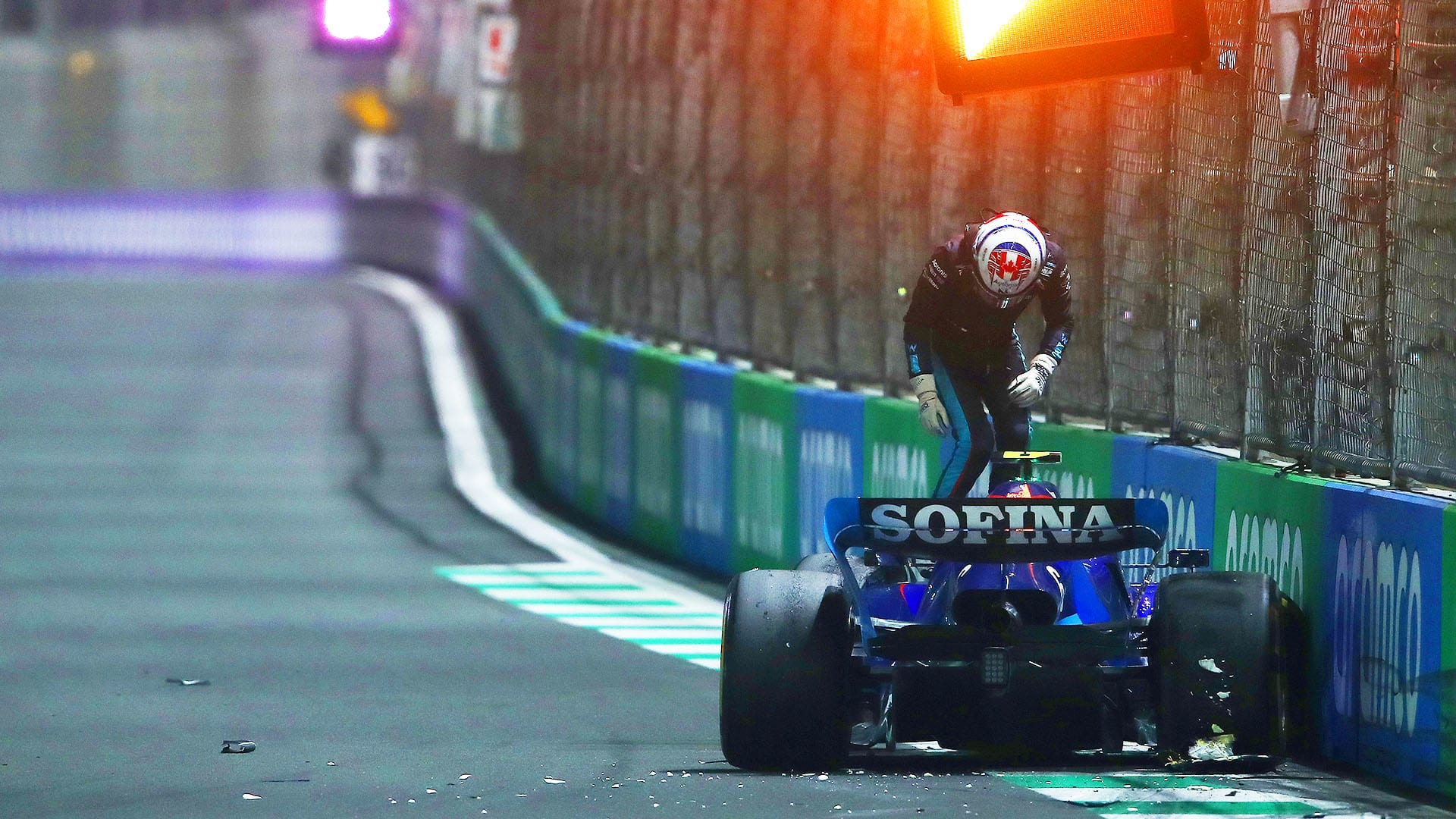 Too often Nicky is bewildered by incidents, radio comms of “I don’t know what happened” are common. And, furthermore and arguably most important, he seems not to learn from his mistakes and hence never gets any better.

Before delving into the differences between Latifi and De Vries during the Monza race, it is worth recalling that the former’s race began with a haphazard first lap that may have ended in tears had Lady Luck not been in a good mood at that moment, and thereafter he was always at the wrong end of the lap charts.

When the race ended early, on lap 47 thanks to the Safety Car which continued until the chequered flag, Latifi was 15th and a lap down on teammate De Vries in ninth; the Dutchman scoring points in a sensational debut.

De Vries scored points in his first F1 race this season, Latifi has not in 16 attempts 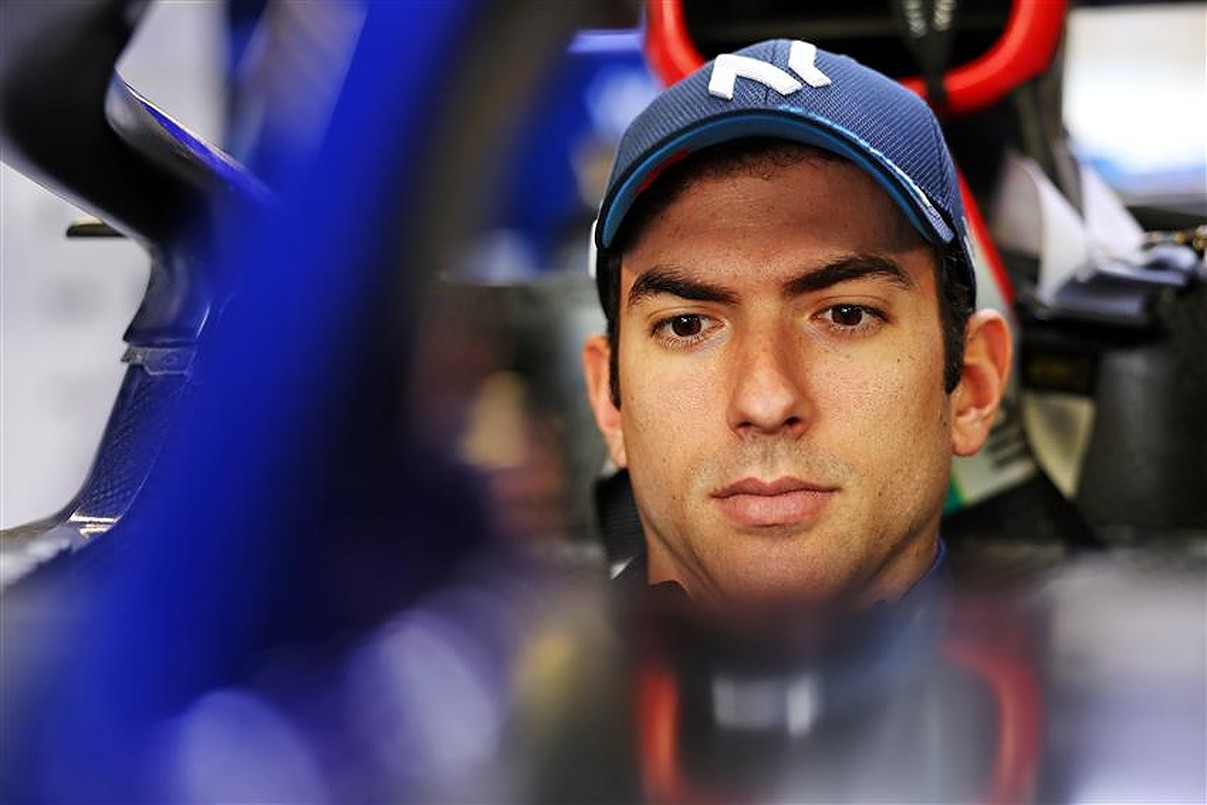 Latifi summed up his Italian afternoon: “We were really compromised at the start. I got sandwiched in between a few cars, trying to avoid getting crashed into, basically and then there were a few cars that cut the first corner.

“It compromised the race because then I became the first car – of the cars out of position – so all the faster cars that were going to come through, I was the first one they got through.”

Asked to evaluate his pace across the 53-lap encounter, Latifi said: “I think the way our car was today, it maintained the position we were in, and we had a fighting chance. But to have to make up ground…

“Our car is fast in a straight line, but we cannot brake and we cannot carry speed through the corners. I managed to get through a few cars, but we’re missing so much downforce – so it was not fun out there,” lamented Latifi.

And the stats show how little fun was had by the occupant of car #6. Below is a lap-by-lap comparison between Latifi and De Vries: 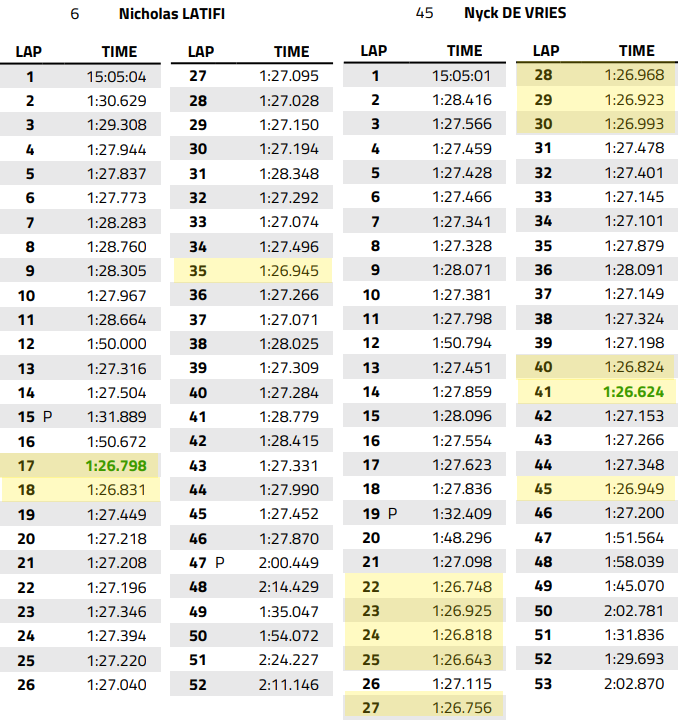 Lap times show that Latifi managed three laps in the 1m26s, while De Vries lived their for 11 laps; also notable is consistent between the two with the latter setting consistent laps in the mid-1m27s early in the race, and the then low 1m27s later in the race in which he was in numerous battles.

From a sporting side, it is well worth remembering that Michael Schumacher’s career was launched after his fabled debut at Spa-Francorchamps in 1991 after which, for the next race.

Benetton not only wrenched the German from Jordan but also ousted Roberto Moreno in the team to make way for Schumi – alongside Nelson Piquet – in Flavio Briatore’s team. And the rest is history.

For a similar legend to be launched, Latifi would be ousted from the team and De Vries would be in the Williams cockpit from Singapore on. But in today’s money-driven F1 world, where the cash of billionaire fathers is king and real talent secondary, that sadly won’t happen.

Instead, as Latifi – who has yet to score points in 16 tries this season – said in the conclusion of his Monza antics: “We’ll look to bounce back in Singapore in a few weeks.”

And most likely Nyck de Vries will be back in the commentary box. Something is not right with that picture. Hopefully, the Dutch ace did enough at Monza to change that in 2023.
As for Latifi, as the headline queries: are his days in F1 numbered or will money talk?