Norris: I was dealing with a car not made to do a launch 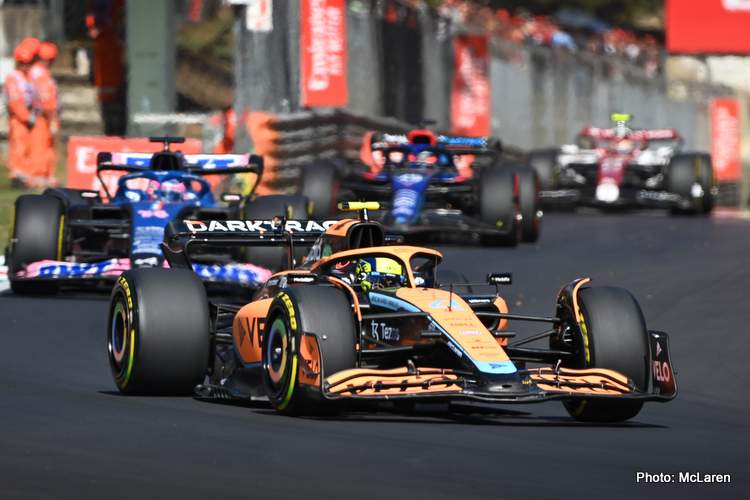 Lando Norris’ 2022 Italian Grand Prix was compromised after he bad start, as he revealed wrong settings meant he was dealing with a car not made to launch.

Lando Norris qualified seventh at Monza, but benefitted from drivers ahead of him taking grid penalties to start third for Sunday’s race.

However all the advantage he had evaporated as he had a horrible start losing position at the start, but could only recover to finish seventh, when fifth was on the cards.

Norris shed some light on the issues that caused his sluggish start, and was quoted by Formula 1’s Official Website saying: “There were some mistakes with the launch settings, things that I couldn’t change or adapt, so I was dealing with a car which wasn’t made to do a launch basically.

“That meant I went into anti-stall like two or three times and lost me a lot of time and positions,” he revealed, “and probably cost me fifth place today.

“So, a bit disappointed, I would say quite disappointed because I felt like I did a good job and I drove well, but we just made too many mistakes,” the Briton lamented.

Launch setting not the only mistake McLaren made

Towards the end of the race, Norris was heard over the team radio requesting ‘radio silence’ which suggested there might be some tension, something he rebuffed, despite hinting at another mistake by the team under the Safety Car sent out to clear his teammate, Daniel Ricciardo’s stricken MCL36.

“I mean, I was relaxed,” he said. “I perform better when I’m relaxed and when I’m chilled. Of course, you just want to be able to be in your zone and concentrate and do your thing and that was all.

“So, I mean we would have finished P6 if there wasn’t a Safety Car, we then boxed which was maybe another mistake.

“It’s just, I’m just good at driving and therefore little things, updates on gaps I just don’t need when there is five laps to do. I was relaxed, I felt like I was doing a very good job, I just don’t like people talking to me,” Norris explained.

Lando pits for another set of Softs under the SC.#ItalianGP 🇮🇹 pic.twitter.com/CWhDOAOYtD

“I think the fact that I got past Fernando [Alonso], he got me on the restart; I got back passed him on just pure pace. Especially after Friday – Friday they looked to be stronger than us, but today we definitely seemed stronger than [Alpine],” the McLaren star pointed out.

Trying to look at the glass half full, Norris said: “Some positives: we tried a few different things this weekend and some seem to have worked out.

“So, hopefully things to look forward to if we can further improve that for the rest of the season,” he concluded.

Ricciardo: The engine just switched off 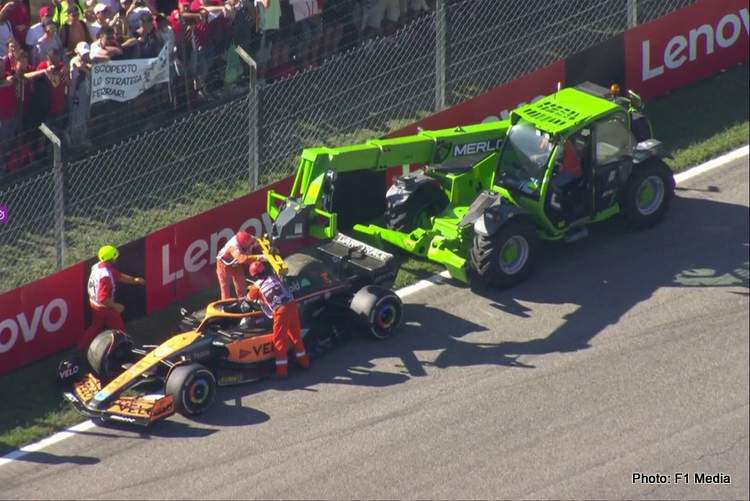 Ricciardo had a change of scenery, starting the race from fourth on the grid, also benefitting from others’ grid penalties, and was on his way to score some points until his MCL36 decided to switch off with five laps remaining, ending his final race at Monza as a McLaren driver, if not his final.

“It was nice to start at the front and get a decent start,” Ricciardo began reflecting on his race. “Lando looked like he had a poor start so I got ahead of him and it was nice to be in third there, but I saw quickly Max (Verstappen) was right behind me and he was obviously on another level.

“I was just trying to set a rhythm in fourth, but we weren’t quick enough,” he added. “I felt like I was doing a good job to hold off Gasly but didn’t have much more to show than that.

“It was a busy race, trying to hold on, do what I could and then yeah, felt like we got a little bit of a rhythm on the Hards with 10-15 laps to go but then the engine just switched off out of Turn Six.

“I had to pull over straight away because it was stuck in gear and so I couldn’t roll to a safe place. It would have been nice to get some points but it wasn’t meant to be today,” the Honey Badger lamented.

With Fernando Alonso retiring from the race as well, and Norris outscoring Esteban Ocon who finished the Italian race a pointless 11th, McLaren were able to close the gap to Alpine to 18 points in their fight for fourth in the Constructors’ Championship.

McLaren fans, we want to thank you for your incredible support during the triple header. 🧡 Time to rest and recuperate before we head to Singapore. See ya there. 👋#ItalianGP 🇮🇹 pic.twitter.com/jOc7kMDkNL