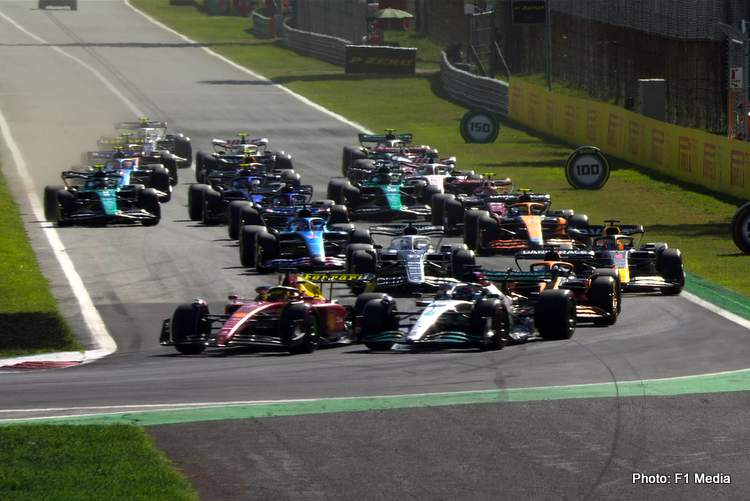 Martin Brundle reflected on the grid penalties that mixed up the starting grid of the 2022 Italian Grand Prix, insisting they are a bad look for Formula 1.

The extent of grid penalties applied at Monza meant it took the FIA several hours after qualifying to issue the starting grid for Sunday’s race.

Martin Brundle was critical of what happened as he reflected on the 2022 Italian Grand Prix in his Sky Sports F1 column.

Brundle said: “With seven cars choosing to, or mostly forced to, take penalties for new power unit components and other misdemeanours, for the second time in three races the grid didn’t remotely represent the qualifying order.

“This is an unacceptable situation because when the fans turn up trackside or switch on their TV sets to watch qualifying, they should reasonably expect that they’re watching the race grid being formed.

“Instead we waited for several hours for the tortuous and complex process of how penalties were applied,” he pointed out.

Brundle believes there should be some change to the regulations, and even suggested what he thought were logical solutions for this dilemma.

“We need solutions here because this is a bad look for F1,” the former F1 driver insisted. “The initial concept is necessary to stop teams throwing new power units and ancillaries at their cars.

F1 needs to sort this problem before next season

“Options might include simply giving each driver more power units per season, applying an in-race penalty such as a pitlane drive through to be taken at some point in the race, or giving the teams commensurate financial and championship points pain rather than the drivers having to carry the burden through no fault of their own,” he proposed.

Some may think fast cars starting from the back would create a great show, but Brundle begged to differ saying: “A mixed up grid can make for an interesting race observing drivers making their way through the field.

“But better still is when the six cars with a realistic chance of winning the race are wheel to wheel in the correct grid places.

“With 24 races next season and either three or six Sprint races, F1 clearly needs to get the regulatory allocation of power units and sporting regulations sorted out,” the 63-year-old continued.

“In the multi-billion dollar world of F1 it looks ridiculous that the teams appear to be short of engines, which of course they’re not.”

Looking back on his own experience Brundle recalled: “I remember when I was driving in the ’80s and ’90s that we had a new motor pretty much every day.

“Top teams would have 60 engines either in build, in use, in transit or in refurbishment, which of course is not sustainable or acceptable either,” he revealed.