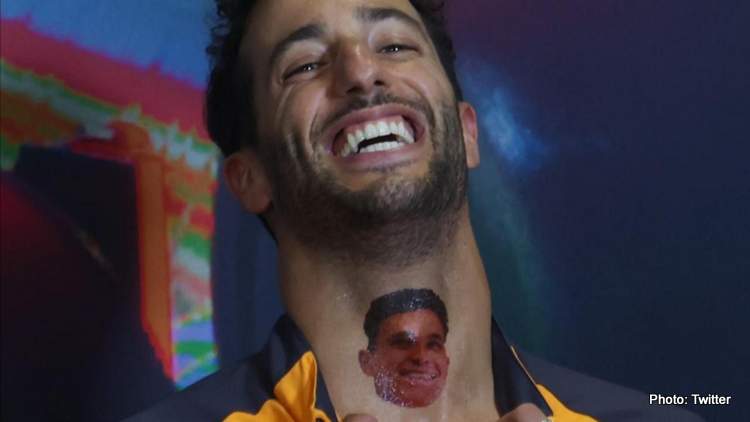 Daniel Ricciardo turned up at the Italian Grand Prix full of fun and sporting a fake tattoo of McLaren teammate Lando Norris’s face on his throat, on his Adam’s apple to be precise.

Norris in return had one of a badger, alluding to Ricciardo’s “honey badger” nickname, and a heart with “True Love” on his neck.

The Briton also had a somewhat smudged picture of Ricciardo doing a “shoey”, quaffing the podium champagne from a sweaty racing boot, on his hand.

Ricciardo has failed to meet expectations at McLaren but, if there is any friction since they announced a mutual parting of the ways from the end of the Formula 1 season, it remained well-hidden.

“This is ridiculous. I have Lando’s face on my neck. We did a little thing this morning with the team and, oh gosh,” exclaimed the Australian.

“We just did some videos,” added Norris by way of explanation. “His Adam’s apple’s on my eye. It looks like he’s possessed a little bit.”

Whatever the reasons, and more will doubtless turn up on social media, Ricciardo was in a happy place as he returned to the high-speed track where last year he and Norris finished a surprising one-two.

That was McLaren’s first win since 2012 and Ricciardo’s first since he was at Red Bull in 2018.

“It is cool. Obviously last year was so special, a big moment. It’s a year on. Those big moments and memories still seem set in the forefront of your mind and it feels very recent,” said Ricciardo.

“Mum and dad are here this weekend, it’s their second race or maybe third I think since pre-Covid. It’s good to be back,” added Ricciardo. (Reporting by Alan Baldwin)