Ricciardo: Monza will always have a special place in my heart 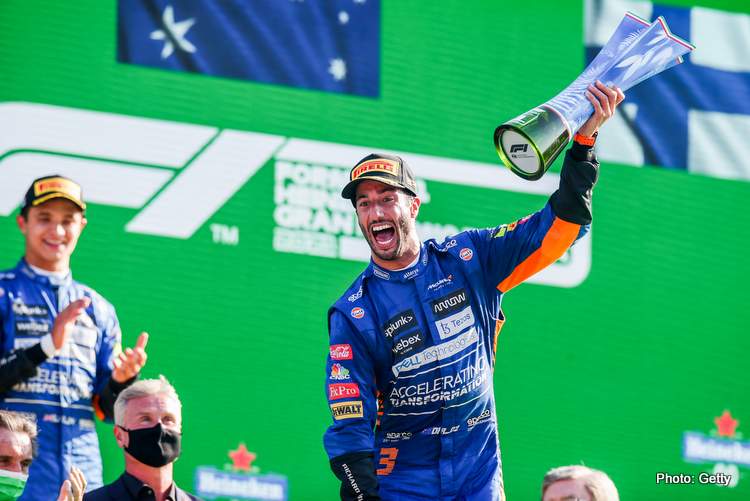 Monza 2021 may well be Daniel Ricciardo’s last Formula 1 career win, as he now faces an uncertain future in the sport, but it remains a very special moment for the Aussie.

What a difference a year makes, as back in 2021 Daniel Ricciardo experienced one of best moments in F1, winning his first race for McLaren at the 2021 Italian Grand Prix after a tough start for his career at Woking.

Sadly, that would turn out to be the Honey Badger’s only high point with McLaren, as more decent results did not follow, and he now finds himself on his final seven races with them, as he lost his seat to compatriot Oscar Piastri and now faces an uncertain future in top flight.

Nevertheless, Ricciardo will always relish that Italian win, and said previewing this weekend’s race: “Monza will always have a special place in my heart.

“Whilst another 1-2 isn’t really on the cards this time around, hopefully we can still bring you a little bit of Italian magic. I’m excited for the track, the amazing fans and the incredible food – the key combination for a good weekend.

“Zandvoort was a tough one for me but I’m keeping my head held high,” added looking back on his 17th place finish at the 2022 Dutch Grand Prix last weekend.

“I’ll keep pushing through and try to end the season on a high,” Ricciardo insisted. “We’ve had a good look at the data and had a deep dive into how we can play it for the upcoming weekend to hopefully get back up the pointy end.

Monza likely to be another difficult weekend

“It’s likely to be another difficult weekend due to the nature of the track and it’s clear we’ve got work to do but I have full confidence in the team as we head towards the last race of this triple-header,” the 33-year-old concluded.

Lando Norris completes a dream result for McLaren last season at Monza, he finished the race second behind his teammate, making it a famous result for the former World Champions.

“The Italian Grand Prix is always an exciting weekend,” Norris said. “My last two trips to Monza have been incredibly positive, with last year being one of my favourite F1 memories, so let’s try and recreate some of that feeling this weekend.

“It’s likely to be a much trickier weekend for us this year but there is still an opportunity for points and to have an impact on the Constructors’ Championship,” Norris predicted.

“With it being the Temple of Speed, I’m really looking forward to getting out on track and seeing how far we can push the car. One last big push as we finish up in Europe for the season so let’s give it all we’ve got,” the Briton added.

McLaren head to Monza on the back foot in their fight with Alpine over fourth in the Constructors Championship, as the now trail the French team by 24 points who outscored them yet again last weekend at Zandvoort.