Hamilton: If I was managing Ricciardo, he’d be racing F1 next year 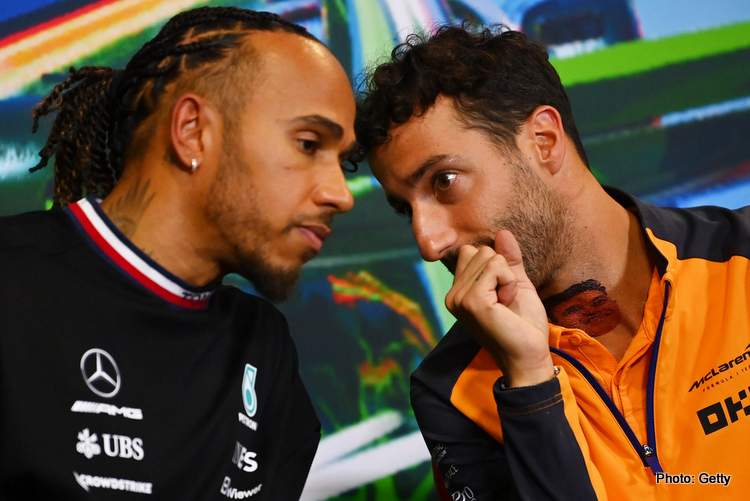 Daniel Ricciardo should be racing in Formula 1 next season rather than to be a reserve, Lewis Hamilton told reporters amid speculation the Australian could end up at Mercedes in that role after being ditched by McLaren and with nowhere really to go.

Ricciardo is leaving McLaren a year early by mutual agreement and told reporters at the Italian Grand Prix that he was keeping all options open, for next year and beyond.

Sitting alongside the eight-times grand prix winner in a scheduled news conference at Monza, seven-times world champion Hamilton said he wanted to see 33-year-old Ricciardo continue on the starting grid.

“I think he should be racing, personally. He is far too talented (to be a reserve). He has earned the right to be amongst us all racing,” said the 37-year-old, who made clear he had no plans to retire and open a seat.

“Of course if he’s a part of our team, then great. But that role is not anywhere near what’s best for him. If I was managing him, he’d be racing.”

Ricciardo won at Monza last year but has generally struggled since he joined McLaren, out-performed by team mate Lando Norris.

The team have announced 21-year-old fellow Australian Oscar Piastri, currently a reserve for both Renault-owned Alpine and McLaren, as his replacement.

“I still don’t know what next year looks like,” admitted Ricciardo. “I do want to be on the grid, I do want to race.”

The only realistic option to stay with a ‘big’ team is a return to Renault-owned Alpine to alongside Esteban Ocon, which many in the paddock believe is the best option for driver and team. A move to Haas or Williams would be a step backwards for Ricciardo. (Reporting by Alan Baldwin)