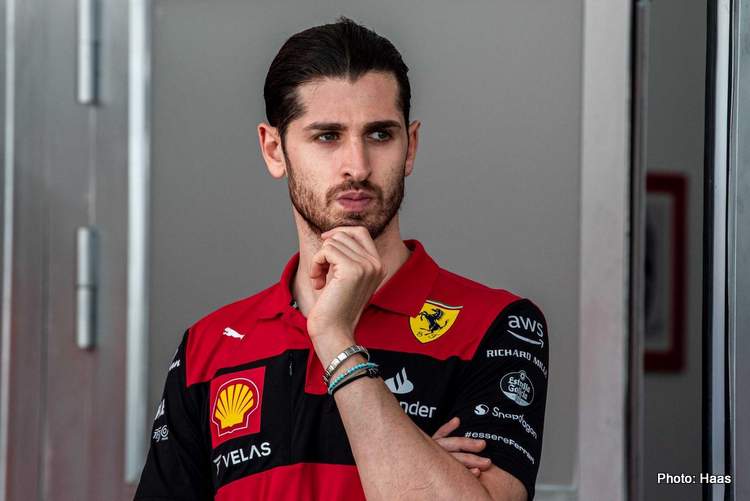 Haas announced today that they will be offering Antonio Giovinazzi the chance to sample a 2022 Formula 1 car in two FP1 outings due to a request from Ferrari.

Giovinazzi last drove in F1 in 2021 for Alfa Romeo alongside Kimi Raikkonen, but the team had a full change of lineup for 2022 with Valtteri Bottas joining from Mercedes, while Chines rookie Zhou Guanyu was given the nod for an F1 debut.

Giovinazzi has since been a reserve driver for Ferrari, a role he shares with Haas’ Mick Schumacher, as well as a Formula E driver for Dragon Penske Racing.

Haas said in a statement: “Haas F1 Team will welcome Scuderia Ferrari reserve driver Antonio Giovinazzi back to the team for FP1 outings behind the wheel of the VF-22 at both the Italian Grand Prix and the United States Grand Prix. Giovinazzi – a veteran of 62 Formula 1 career starts – is no stranger to the American outfit having enjoyed seven FP1 sessions with the team back in 2017 driving the VF-17.

“The 28-year-old from Martina Franca, Italy most recently competed in Formula 1 for Alfa Romeo Racing (2019 – 2021). This season Giovinazzi has continued his involvement in the sport as the reserve driver for Scuderia Ferrari while contesting the Formula E World Championship for Dragon Penske Racing.

“Giovinazzi will participate in FP1 at the Italian Grand Prix at the Autodromo Nazionale Monza on Friday September 9 and again at the United States Grand Prix at Circuit of the Americas on Friday October 21 – regular Haas F1 Team drivers Kevin Magnussen and Mick Schumacher will both vacate their seat for one session each to accommodate Giovinazzi,” the statement concluded.

It was a request from Ferrari

Haas team principal Guenther Steiner said: “We’re happy to welcome Antonio Giovinazzi back to the team for the two FP1 outings. Ferrari were keen to give Antonio some seat time in a current-spec Formula 1 car on a race weekend and we were naturally happy to assist.

“We enjoyed a similar situation back in 2017 with Antonio and Ferrari – the clear difference between then and now is the experience he’ll have gained competing for the previous three seasons in Formula 1 and the feedback he’ll be able to give us in Italy and America.

“I’m looking forward to seeing Antonio again and having him back in the paddock with us,” Steiner concluded.

“I’m so glad to have the chance to drive again in official F1 sessions,” Giovinazzi added. “Besides simulator driving it is important to test a true car and I can’t wait to put my suit and helmet back on.

“It’ll be an opportunity to get confident with the new generation cars – it’s the best way to be ready if I were called as reserve driver. Driving on challenging and exciting tracks as Monza and COTA makes it even more thrilling.

“Thanks to Haas F1 Team and Scuderia Ferrari – I’m looking forward to giving my contribution to the team that counted on me already in 2017,” the Italian concluded.