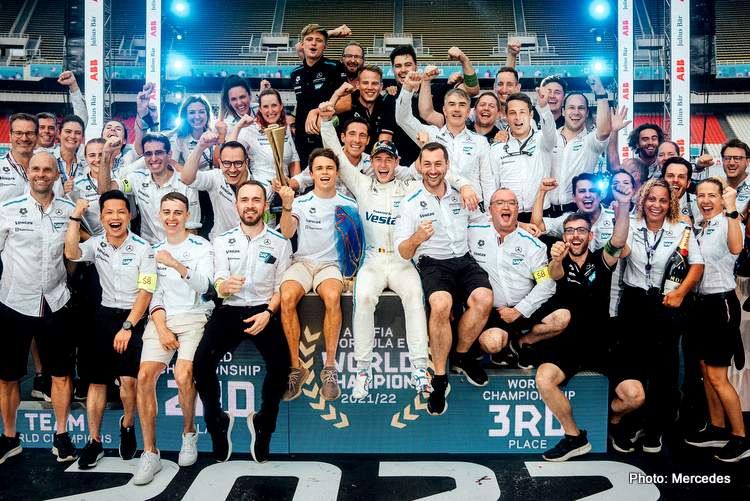 The second of two E-prix in Seoul also ended an era for the FIA-sanctioned series, with season nine in 2023 introducing a new generation of quicker, lighter and more energy-efficient cars.

Former McLaren F1 racer Vandoorne started fourth and ended up second in Sunday’s race in and around the South Korean capital’s Olympic stadium to take his first championship 33 points clear of Mitch Evans in a Jaguar.

New Zealander Evans, who had won from third on Saturday to close the gap to 21 points, finished seventh after qualifying only 13th for a race he had to win while hoping Vandoorne finished outside the top seven.

“This is amazing; what a season it’s been. It’s just the best feeling ever … what we’ve accomplished is something special,” Vandoorne said.

“It was really about consistency at the end,” added the 30-year-old, who took the title despite winning fewer races than Evans and Swiss-Italian Edoardo Mortara, Sunday’s winner for the Venturi team and third overall.

Vandoorne won only once in 2022, in Monaco, with Evans and Mortara taking four each.

Britain’s Jake Dennis was third on Sunday for Avalanche Andretti after being second on the road but collecting a five-second penalty for causing a collision that dropped pole-sitter Antonio Felix da Costa to the back of the pack.

Mercedes EQ, who retained their team title ahead of Venturi and DS Techeetah, have sold their outfit to McLaren and depart Formula E on a high after sealing both championships for the second year in a row.

With the F1 Silly Season in full swing both Vandoorne and De Vries could be in the frame for a drive or at least a reserve/subbing role in F1. (Reporting by Alan Baldwin in London)