Rosenqvist: Whatever my future holds I will decide with Zak 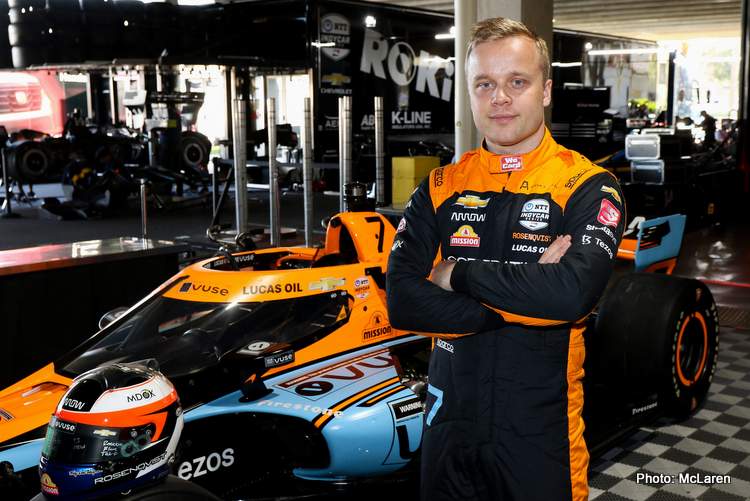 One of the strangest motorsports silly seasons in memory has knocked IndyCar driver Felix Rosenqvist into limbo, with the Swede now desperately trying to hold onto his current seat and avoid being shipped to McLaren Racing’s new Formula E team.

McLaren and Rosenqvist said in June they’d agreed to a deal in which Rosenqvist would either return in 2023 to IndyCar or be the key piece when it launches its FE team next season. But as Rosenqvist’s performance has improved, his desire to remain in IndyCar has clouded his future.

He’s now snagged in the fight between Chip Ganassi Racing and IndyCar champion Alex Palou, who wants to leave Ganassi to move to the McLaren family next season. Ganassi is suing to stop the move.

Should Palou become available, Rosenqvist would be squeezed out of Arrow McLaren SP’s three-car IndyCar lineup. Palou would join Pato O’Ward and Alexander Rossi in IndyCar, and likely be a reserve driver for the Formula One team.

Throw into that the possibility that McLaren, on the other side of the pond, are looking to oust underperforming Daniel Ricciardo from their F1 team to make way for Oscar Piastri to partner Lando Norris as soon as next season.

A move only possible if Ricciardo can be convinced take a payout from McLaren, which may include an Indycar drive as a sweetener

The drama intensified last weekend at Nashville amid speculation Rosenqvist was looking for an open 2023 seat in the IndyCar paddock. In a statement provided Tuesday to The Associated Press, the 30-year-old said a report suggesting he did not have a McLaren contract past this season “is not true. I do.”

McLaren holds an option on Rosenqvist in IndyCar that the team is likely holding until it has a resolution on Palou. In the meantime, Rosenqvist has not signed a contract to race in Formula E for McLaren, but the team head Zak Brown told The AP he’d release Rosenqvist if he finds another ride.

Rosenqvist: Zak has tough business decisions to make and holds an option my services for 2023

“I have a great relationship with Zak Brown and McLaren and they have always been very transparent and fair with me,” Rosenqvist said in his statement.

“I stand by what we announced in June. However, since then, I feel I have found my form in IndyCar and have made my desire clear to Zak in recent weeks to remain in IndyCar.”

Rosenqvist moved to IndyCar from Formula E after two seasons to join Ganassi ahead of the 2018 season. He scored one win, three podiums and a pole in two seasons with Ganassi, then moved to McLaren in 2021 as a free agent.

He struggled in his first season with the new team in what Rosenqvist has called the worst year of his driving career. His rebound did not begin until a fourth-place finish in the Indianapolis 500 in May – and by that time Brown was already deep in discussions with Rosenqvist over a move to FE.

Rosenqvist said in a statement that he has “unfinished business” in IndyCar: “That doesn’t mean I’m not excited about Formula E as it is a great championship that I have competed in successfully.

“I recognize there is a lot of speculation at the moment about many drivers and where they will be next season. All I want to do is focus on my IndyCar racing the balance of this year. Whatever my future holds I will decide with Zak.”

There are three races remaining in the IndyCar season, which resumes next weekend at World Wide Technology Raceway outside St. Louis. Rosenqvist has one podium, two poles and is ranked ninth in the IndyCar standings.