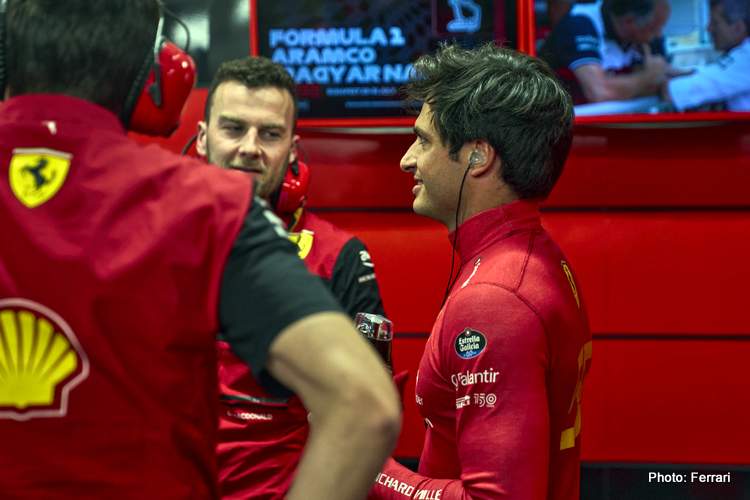 Carlos Sainz had a great start to his Formula 1 life at Ferrari in 2021, finishing the Drivers’ Championship ahead of Charles Leclerc, but as he entered his second season at Maranello, the results have been underwhelming.

Sainz struggled to get on top of his F1-75’s handling – a car that proved to be formidable in Leclerc’s hands – and he struggled to match his teammate’s pace in addition to being incident prone, pushing too much sometimes.

However, the 2022 British Grand Prix was a turning point for the Spaniard, as he took his maiden pole position, and transformed it into a maiden F1 victory during the race.

He followed that by two strong performances in Austria where he was on his way to score second when his power unit blew and burst into flames, while in France he drover from the back of the grid. after a penalty for taking a new power unit courtesy of his Austrian race troubles. He ultimately finished sixth.

Facing the media in Hungary, Ferrari’s Racing Director Laurent Mekies was asked if Sainz’s improved from – with Leclerc’s race ending crash in France in mind – meant he is now team leader.

“Carlos has had three extremely strong weekends: Silverstone, Austria, France,” Mekies began. “We are very, very happy with that. It did not show up so much on the final race classifications besides Silverstone because we had other things to deal with.

“But you are very right in saying that he has made great progress since the start of the seasons. We made no secret at the beginning of the year that naturally the car was not suiting him very well. We had to work a lot with him, with his engineers, with everybody back in Maranello to make sure we can give him something he is more comfortable with.

“And these things take time,” he revealed. “And slowly, it seems that we are heading towards the right direction, which is another great sign for the team and the way we interact. So I think that’s where it is.

“Does it make somebody a leader or not? No, it doesn’t, it is not what makes a leader or not,” Mekies insisted. “We know we have two very, very good drivers. We treat them in a way that we can maximise our championship positions and we want them as fast as they can possibly be.”

Asked how Sainz and Ferrari were able to turn the situation around, Mekies explained: “Well, at first it comes from Carlos’ ability to analyse what the car does and what he needs from it.

“And then not only is he able to feel it, but he’s able to communicate it to the engineers and slowly we have been able to transform that into actions in terms of the way we set up the car, and in terms of the way that perhaps we tweak some of the developments and that’s how it happened.

“You are never sure it’s going to produce the results you hope until you actually see these trends coming. So it’s good positive information for us to see that the trend seems to be there,” he admitted.

As for team orders going forward, the Frenchman said: “We have always been very clear, you know. We target to have the best result for the team; Ferrari comes first.

“And then of course there will be a point where we will need to focus more on a driver compared to the other one if the championship position is requiring.

“So, it does not mean waiting for the mathematical difference that you mentioned but it means being at the point of the season where you think it is the right thing to do so,” he explained.

Mekies was speaking during the teams’ representatives press conference during the weekend of the 2022 Hungarian Grand Prix, where Sainz finished the race fourth ahead of Leclerc who was sixth, after Ferrari messed up his strategy yet again.