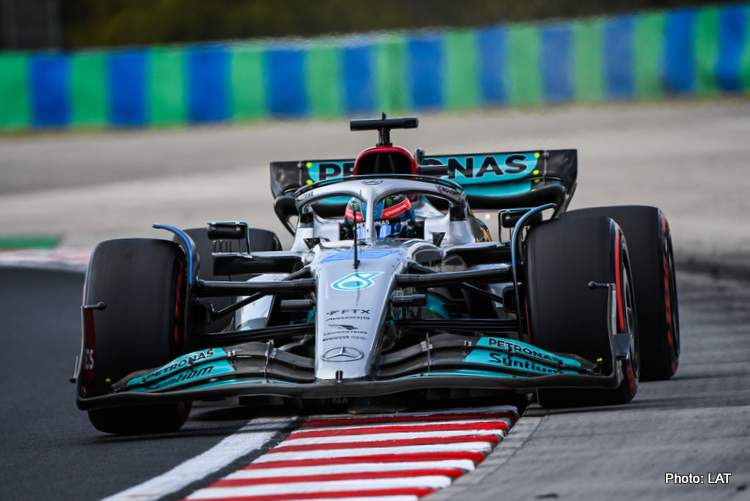 Mercedes’ director of trackside operations revealed after the Hungarian Grand Prix that the team has got more performance coming from their W13.

Mercedes finished P2 and P3 in Hungary last Sunday, Lewis Hamilton leading George Russell who even took his first ever career pole in qualifying at the Hungaroring.

The Silver Arrows seemed to be decently fast around the twisty track in Budapest, and the team’s director of trackside engineering, Andrew Shovlin warned rivals more is coming.

Speaking in Mercedes’ YouTube debrief after the race he said: “Well, we’ve got more coming.

“We are trying to bring some performance to Spa that will hopefully close that gap, we haven’t got far to go now. But we’ll keep developing the car for a little while now.

“We’re quite excited though, the last few races have been the most fun we’ve had all year and we are just hoping that we can take that extra step because we definitely want to be winning races in the near future, so we are working hard to try and achieve that,” he added.

Shovlin claimed Mercedes’ result in Hungary was on merit, he said: “This last one was particularly satisfying because we weren’t relying on the misfortune of anyone dropping out with a reliability problem.

“The car pace was also very good, and it is always nice to have a good race before you go into that period of holiday. The most satisfying thing though is to see where the car is in terms of pace now in qualifying and in the race.

Satisfying to be racing Ferrari and Red Bull

“We had a lot of ground to make up from the start of the year, we’ve been working really hard trying to bring bits to every race and it is really satisfying now to see that we are racing with the Ferraris, with the Red Bulls right to the front,” the engineer revealed.

Mercedes had a tough start to their weekend in Hungary as they initially struggled to get their car working, and Shovlin said that it was their learnings from practice that helped them deliver that strong result on race day.

Speaking in Formula 1‘s F1 Nation podcast, Shovlin explained how the turnaround was achieved, he said: “We actually learned quite a lot on Friday.

“It was a bit uncomfortable and the car was in a pretty bad place but it was one of those where we went one way and realised we needed to go the other, so it was a useful experience.

“We are doing all these races saying we have got to make them live experiments, we have got to be learning for the future. That sounds great on paper but in practice, it can be quite difficult and quite uncomfortable,” Shovlin pointed out.

The haul is growing. 🏆😍 Let’s keep the momentum building after the break, Team. 💪 pic.twitter.com/NJaJWE1YxU