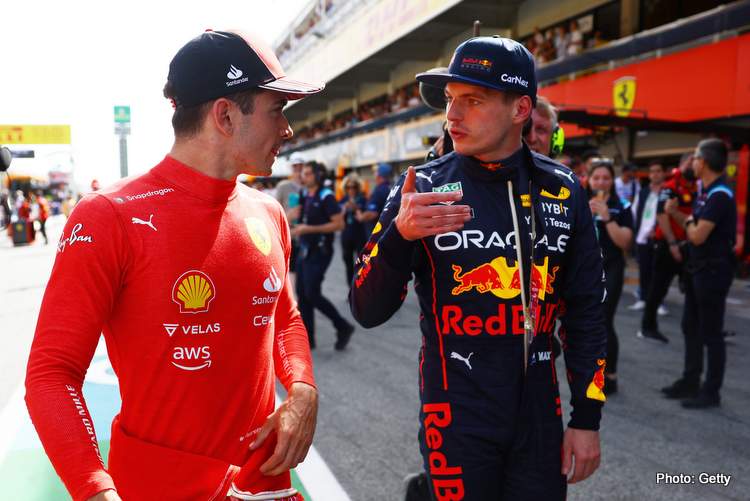 Max Verstappen took a dig at Mercedes, as he compared his rivalry with them in 2021 to that with Ferrari this year, whom he called a well-respected competitor.

The bitter rivalry between Verstappen and Mercedes’ Lewis Hamilton in 2021 is well documented with much written about it, but this year’s Title fight with Ferrari has naturally drawn comparisons between the two battles.

Asked how he saw this year’s Title contention with Charles Leclerc compared to what he faced with Hamilton, Verstappen told Sky Sports Italy: “I prefer what we have now.

“First of all, Charles I know very well, he’s a nice guy, we are a similar age – I think we are only three weeks apart,” he explained.

“On Saturday night, we even had a laugh in Paul Ricard, and I think that’s great because that’s what racing should be about,” the Dutchman revealed.

“We are hard competitors on the track and we will always try to beat each other, which I think is very normal, but outside of it you can have a good time as well, and that’s what I really enjoy about this year.

“Let’s say it like this, I would not be on a table on Saturday night having a laugh with (Mercedes),” Verstappen said in contrast.

Asked why this year’s rivalry is so different from last year, Verstappen responded: “Just the click we have at the moment with the team, and I have a lot of respect for Ferrari in general.”

It’s not the first time Verstappen and Hamilton take swipes at each other, as the latter said after the British Grand Prix that Leclerc was more sensible than Verstappen after he and the Monegasque had a tussle at Copse, an encounter that ended badly in 2021 with Verstappen.

Verstappen responded at the time that it was good Hamilton now “understands how to get to an apex“, which just gives an idea how much the 2021 season is still entrenched in both drivers’ minds, despite all their talk about moving on.