Russell: We did everything right, it didn’t go our way 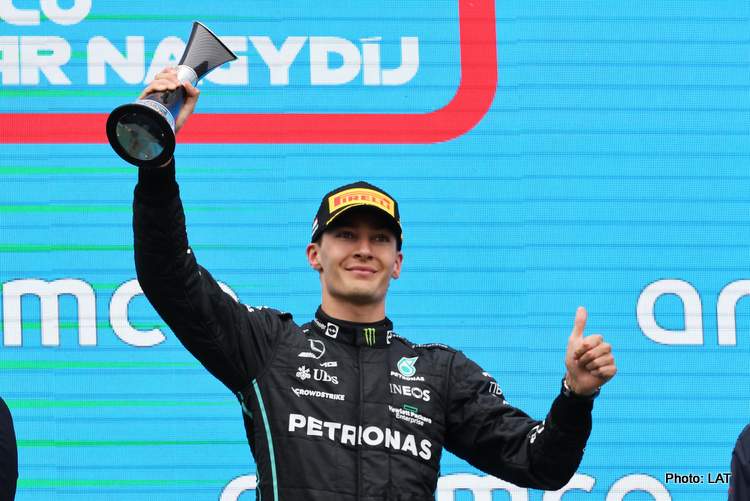 George Russell would have to wait some more to get his first Formula 1 win after finishing third in Hungary, a race that didn’t go his way despite doing everything right.

Russell could not convert his maiden pole position at the 2022 Hungarian Grand Prix into a maiden win, despite driving faultlessly all race long, but his car lacked the firepower to fend off the competition, keeping in mind the strategy did not benefit him as much as it did to his teammate Lewis Hamilton who finished ahead of him in second.

“We did everything right for both of us to fight for the win but it didn’t go our way,” Russell was quoted by F1’s Official website. “It was always going to be tricky because there was rain throughout.

“Knowing you’re on soft tyres I was rubbing my hands, pulled a gap to Carlos and then the rain stopped. It was a good first stint and I pitted early to cover Max and the Ferraris but Max was too fast and that put us in a tricky place on the last stint on the mediums.

“I was struggling,” he revealed. “My engineer said we had 25 laps to go and I thought this would be tricky. Lewis did an amazing job and had better pace at the end.

Challenging managing the tyres in the end

“I had a really strong start, and it was a first good stint,” Russell said later on in Mercedes’ race report. “We pitted quite early on both stints and tried to keep the tyres out until the end, as well as pushing as fast as possible at the same time

“Towards the end on the mediums when the rain started to come down, I struggled and lost temperature,” he admitted. “It was challenging to manage the tyres, so there’s lots to look into and see where we could’ve done better.

“Amazing job by the team, pole position yesterday and double podium today. We’re making progress and I’m proud of the work everybody has put into it.

“We will come back to the second half of the season with a reset, refocussed and will try to fight for some victories,” the Briton concluded.

Mercedes can work with this result

Toto Wolff added: “George had a great qualifying session with pole and drove a solid race. He was in the fight utilising the tyres but ran out of them in the second stint.

“P2 and P3 twice in a row is great but we want to fight for the win,” he said of his team’s result. “We have a result we can work with, given we had a really bad Friday.

“It’s very frustrating and not easy to pick yourself up and stay motivated, so it’s a learning process. Today, we had good pace, but we need to stay humble and look at race weekend after race weekend so we can try to gain more learnings and experiment to put us in a situation where we can actually fight for wins at the end of the season,” the Austrian explained.

After Hungary, Mercedes head into the summer break third in the Constructors’ Championship, only 30 points behind second-placed Ferrari.