Leclerc: Vettel texted me after Sunday at Paul Ricard 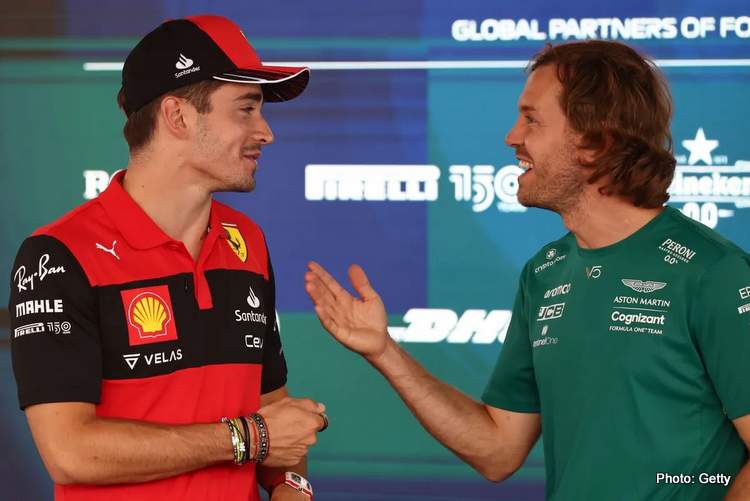 Charles Leclerc said that his relationship with former teammate Sebastian Vettel has evolved over time, revealing the German texted him in support after his crash at Paul Ricard during the 2022 French Grand Prix.

Charles Leclerc will go down in history as the driver who dethroned Sebastian Vettel at Ferrari, when he joined the team back in 2019 and was immediately on it, pushing him hard the quadruple Formula 1 Champion’s relationship with the team was already on the rocks.

Speaking to the media in Hungary on Thursday, Leclerc reflected on his relationship with Vettel saying: “Our relationship evolved throughout the years.

“I arrived the first year and I was obviously super-impressed and I think I was probably very weird to him because I was shy and didn’t know what to say when I was with him.

“But now he’s a friend and he always texts me, like he did after Sunday, and always tried to make me feel better whenever I’m going through a tough time. So it’s nice to see how much we’ve grown since I first met him,” the Monegasque revealed.

Reflecting on his high-profile crash at the French Grand Prix last Sunday, Leclerc said: “The real pressure I had before that, when Max [Verstappen] was really behind.

“Then at that point Max had already moved to a non-optimal strategy. So I just had to push and focus on my own race, which I was doing.

France a mistake going too far fighting with the limits

“But then obviously when you are fighting with the limits, sometimes mistakes can happen. And I think this is a kind of mistake that I just went too far and that’s it,” the 24-year-old lamented.

“I really hate to say ‘oh it’s the wind, oh it’s a bird’ or whatever. I think I’m driving the car ultimately and I did a mistake.

“Yes the conditions change a little bit every lap and that’s for everyone,” he pointed out. “It’s obviously more tricky whenever you are on the limit, but again, I think everybody’s on the limit.”

As for his prediction for this weekend’s race in Budapest, the final race ahead of F1’s summer break, Leclerc said: “I think we’ll have a strong car.

“Paul Ricard and Budapest are two tracks where I struggled a bit more in the past, personally. But Australia was the case also this year and at the end I managed to have a great weekend.

“So I hope this weekend I can also turn things around,” the Ferrari ace concluded.

Leclerc has a 63-point gap to Max Verstappen in the Drivers’ Championship, which he has to overcome should he hope to take his maiden F1 Title this year.