Ricciardo: I’ve got some good history with Hungary 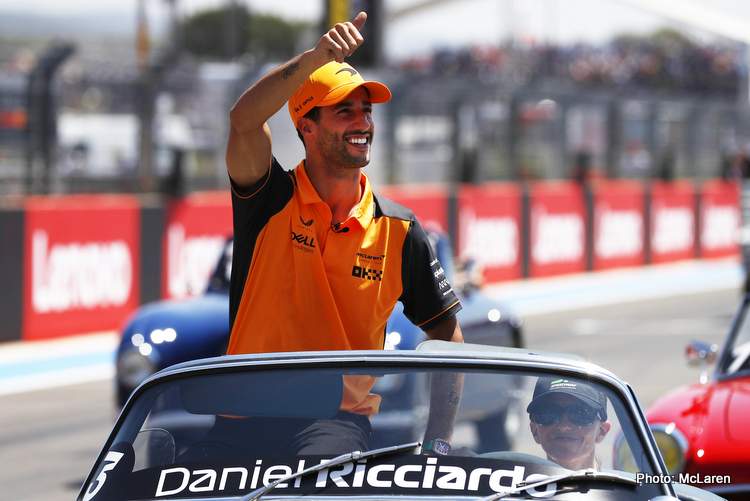 Daniel Ricciardo is excited to be going to Hungary this weekend, a track where he has good history, having won there back in 2014 when driving for Red Bull.

Ricciardo scored points in an updated McLaren last time out in the 2022 French Grand Prix, finishing ninth, a slight improvement for the Australian, who now had his focus set on Hungary.

“I’m excited to go to Hungary,” he said in McLaren’s race preview. “I’ve got some good history with the track having won there in the past so I’m looking forward to the challenges it poses and to hopefully go into the summer break on a positive.

“Whilst I wasn’t satisfied in France, we’ve learnt a lot in the last couple of days and there’s some good things to take into this weekend around the upgrades and optimising them for the car,” he added.

“Let’s get out there, have some fun on track and see if we can keep the double points streak going!” Ricciardo concluded.

Lando Norris finished seventh at Paul Ricard and is looking forward to his second outing in his upgraded MCL36 after some homework between both races trying to understand the car.

“Hungary, let’s go!” Norris said. “It’s the last race before the summer break so we’ll give it everything and leave it all on the track.

“It’s a challenging circuit with not tonnes of opportunity for overtaking but there is a nice opportunity to get some points. We maximized our result in France, and we’ve been looking at the data as a team to make sure we’re in the best place we can be moving forward with the upgrades,” he explained.

“We still have a lot of work to do, particularly in the fight with Alpine, but we’re heading into the summer break with our heads held high and in a positive position to fight in part two of the season,” Norris insisted.

McLaren team boss Andreas Seidl added: “The final race before the summer break poses some exciting challenges for the drivers.

“The Hungaroring is a technical track with its tight and twisty nature which means that overtaking may be a little more difficult. Ensuring we get a good set-up in place during practice so that we’re in the best possible position in qualifying will be very important.

“It will be another very hot weekend for the team. We need to ensure to stay focused and on top of reliability,” the German pointed out.

“The upgrades in France improved performance, resulting in double points,” he revealed. “Whilst there is still a lot of work to do on optimisation, we’re in a good position to keep battling with Alpine for fourth in the constructors’ championship.

“Thank you to the team for all their great work leading up to the summer break and into the second half of the doubleheader, one last big push,” Seidl concluded.

The Hungarian Grand Prix will be the final race before Formula 1 heads into the summer break.