Parc Ferme: FIA “Regu-cide” and the case of the missing grip 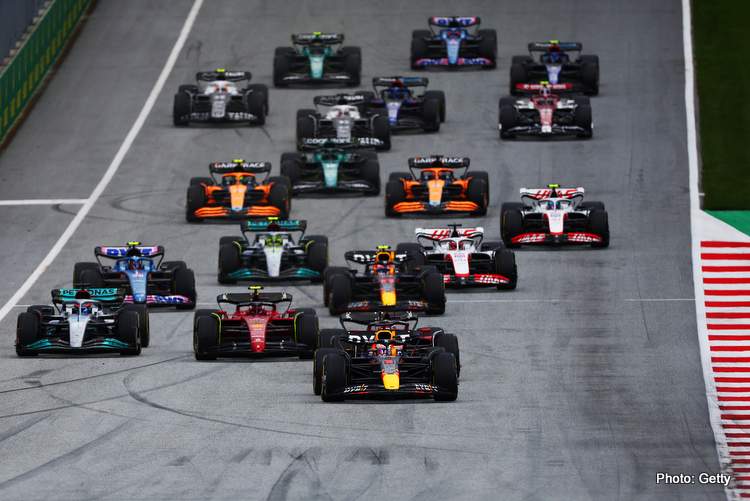 The Austrian Grand Prix featured numerous decisions and penalties from the Stewards that raised questions and confusion, a case of FIA “Regu-cide” at best.

But let’s start with Ferrari and Charles Leclerc. Successive “gut punches” in race fortune can make or break a driver. Leclerc proved he is not one to be broken. Last weekend he demonstrated his ability to dig deep and haul himself back onto the top step of the podium by winning the Austrian Grand Prix.

The powerful Ferrari engine was always going to be an asset at the Red Bull Ring, however this time the chassis also played its part, delivering a better tyre wear performance than in previous races.

It could have been a double celebration for the Monegasque driver if he hadn’t settled for a “slugfest” with his teammate during the opening laps of the Sprint Race the day before.

It was this tussle between the Maranello drivers on Saturday that in many ways highlighted the difference between Ferrari and Red Bull in Sunday’s race.

Verstappen left to fight the Ferraris on his own 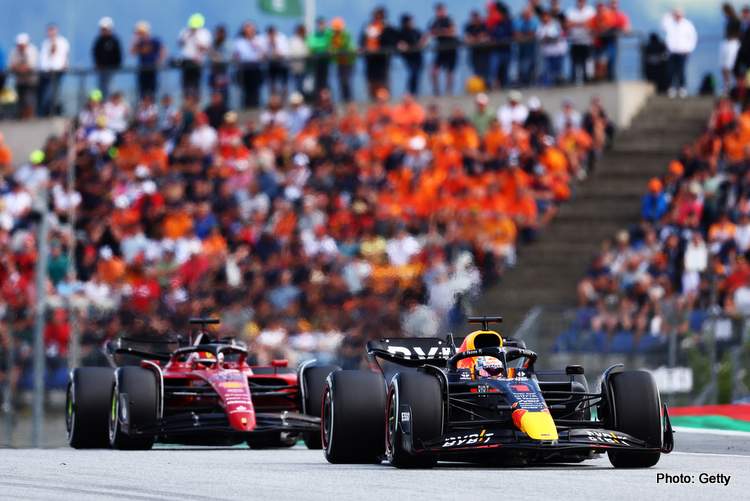 Rather than be left to manage his tyres at the start, Max Verstappen had to contend with two eager Ferraris pushing him around the track and no wingman to assist him in his defense. His eventual defeat was credited to higher than normal tyre degradation, with Max and the Red Bull Team seemingly “mystified” as to why this should be the case.

I would suggest that if the young Dutchman were to look in the mirror, he would immediately see the reason. No blame here, it’s just Max had to push constantly throughout the race, either to catch or stay ahead of the Ferraris. As opposed to controlling things from the front, something of a relatively new experience for him this year.

The weekend produced some entertaining racing despite the best efforts of the Stewards who seemed to be all over the place, issuing penalties like sweets at a children’s party. 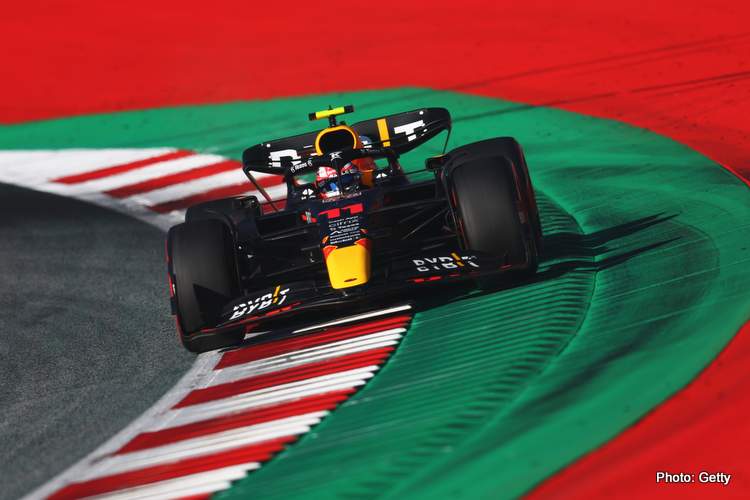 In the past, I remember that it was rare for one of those FIA pop-up notifications to appear on the screen. Now there seems to be a permanent banner. Unfortunately, when their attention was required (as in Perez’s of track excursion in Q2), they appeared to be absent.

The net result was Gasly going out in Q2 when it should have been the Mexican; denying him a shot at improving his qualifying position because of… well, I’m not quite sure.

Of all the drivers that exceeded track limits in qualifying, the Red Bull number two was the clearest, but for some reason, the Stewards had to contemplate their navels on this one, and only got round to doing something about it post Q3.

Issuing suspended fines because a Formula 1 driver breathed out without permission was not a problem, but timely and equitable regulation of the competition, well that seemed to be a struggle in Spielberg.

Racing is the operative word 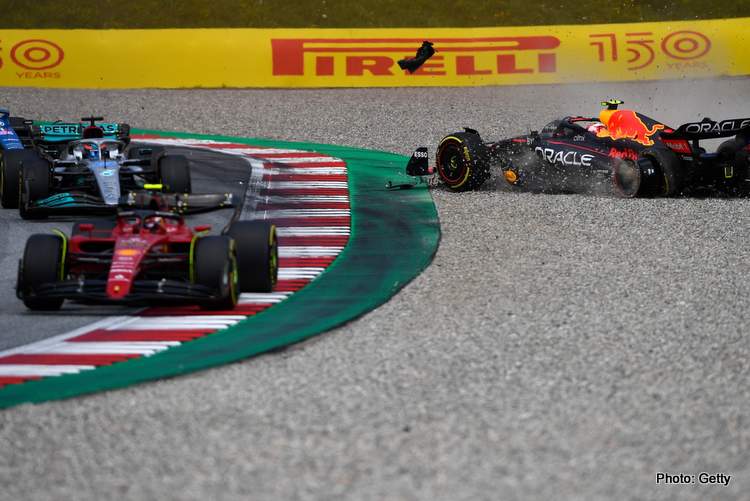 Another case in point is the penalties issued for “pushing another driver off the track” – Alex Albon against Sebastian Vettel. And “Causing an accident” – George Russell against Sergio Perez.

Despite the different categories applied by the Stewards, the incidents were effectively identical. Both occurred after the respective drivers had entered the corner.

In Perez’s case, he closed the space and became a victim of his actions. The fact that he was ahead at the point of collision is academic in this situation. Both recipients of the penalties were being passed on the outside by their purported victims.

Overtaking around the outside of a driver has always been a high-risk manoeuvre and an invitation to be tipped into the scenery. In the past, it was rarely used since there was only grass or trees at the edge of the tracks and getting it wrong was both likely and expensive.

However, following the addition of tarmac run-off areas at corner exits, the risks have evaporated and hence, it has become more popular. When drivers get squeezed, rather than backing out, they claim they are being pushed off.

Neither Albon nor Russell changed direction and therefore did not change the available space. So how did the Stewards come to the conclusion that Russell and Albon were at fault? In both instances, it was a racing incident. Racing being the operative word.

Drivers will always push the limits 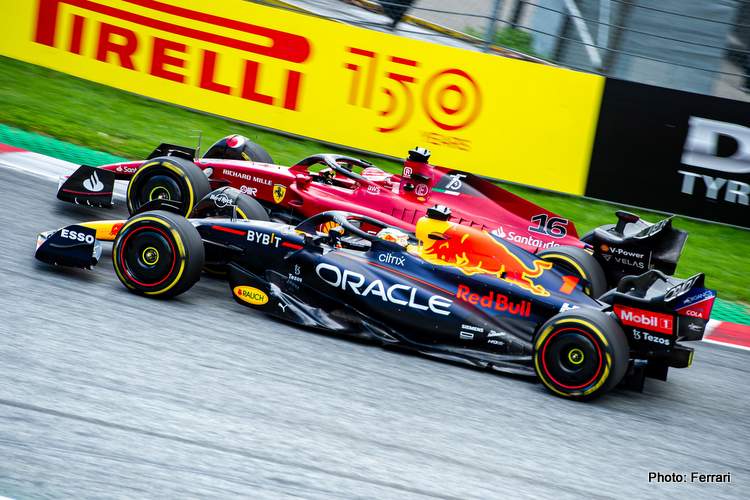 The FIA also received complaints from the drivers on the number of penalties issued over exceeding track limits. Here I believe the Stewards were justified in their actions. The driver’s insistence that they do not mean to exceed them and gain no time as a consequence is missing the point.

The racing should take place between the white lines, so that is where they should stay. You don’t see the drivers repeatedly crossing the white lines lap after lap when there is grass at its edge but as soon as there is tarmac, their competency seems to depart with the green stuff. I saw all the drivers significantly “widening” the entry and exit at several turns throughout qualifying and the race.

The circuit needs to be delineated, or we might as well go home, but as long as there is nothing more than tarmac, “sausages” and/or rumble strips at track edges then the drivers will push the limits.

It’s what they do! However, there is an action that FIA can take to resolve this without all the paperwork. They should think Silverstone and insist circuits put grass (or the coefficient of grip equivalent) at the edge of the circuits.

That way the Stewards would be relieved of the odious task of deciding if a driver has exceeded the track limits, forests could sleep more soundly at night and nature be left to deliver justice.

This would provide more time to focus on the important aspects of racing like stopping drivers; wearing nose studs, crossing a track without being given permission and not handing their homework in on time.

Come on boys, focus on the big stuff and let the small stuff be exactly that.