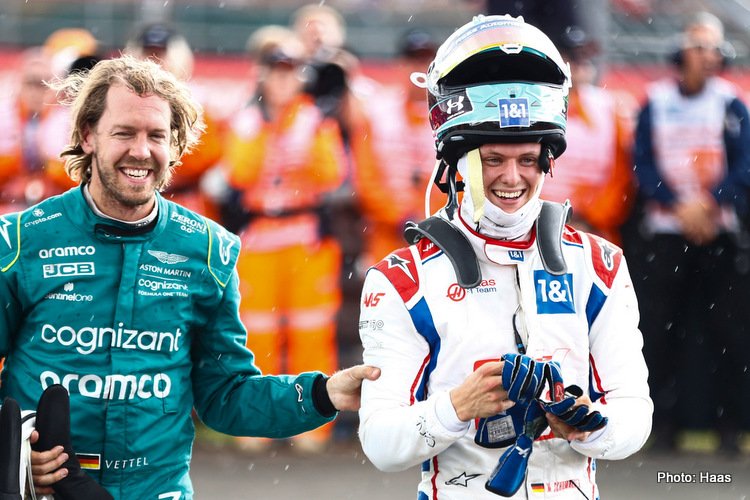 It took a while – 31 races to be precise – but finally Mick Schumacher collected a first points finish of his Formula 1 career with eighth place at the 2022 British Grand Prix, in an incident-packed race of high attrition.

The performance eased some of the mounting pressure on the Haas driver, son of seven-time world champion Michael.

Following in the slipstream of one of F1’s all-time greats has opened doors for the young Schumacher but along with opportunity has come sky-high expectations that the Haas driver has found increasingly difficult to live up to.

While it took his father two races to register his first points finish at the 1991 Italian Grand Prix driving for Benetton, Mick finally made it on his 31st attempt, at the 73rd British GP with the accomplishment applauded by others drivers, including world championship leader Max Verstappen.

“It’s great to be able to score points in a double points finish in a sense that we have now jumped Aston Martin in the constructors which is something great, something we have been aiming for a while now,” said Schumacher. “Now we are just trying bit-by-bit to get some more points out of the others.”

He added later in the Haas race report: “We’re really happy. Coming back from P19, I said we have the speed to go forwards and we definitely showed it.

“It’s great for the team, a double-finish in the points, so that’s obviously very helpful in the constructors. For me, I’m happy now to focus on what’s really important and that’s the racing and the driving.”

In the build-up to the Silverstone weekend, there were whispers in the paddock that the 23-year-old German, despite his pedigree, could be dropped after a run of crashes and poor finishes.

After going pointless in his rookie season last year, Schumacher had come close to ending his drought several times before Sunday’s Silverstone breakthrough.

Points looked on the cards at May’s Miami Grand Prix until he crashed with his mentor Sebastian Vettel four laps from the finish while challenging for ninth.

At the Canadian Grand Prix on June 19 Schumacher qualified a career-best sixth but failed to turn that into a points finish when his car stopped mid-race.

At Silverstone on Sunday, Schumacher steered clear of an early pile up that took out several cars and delivered a strong performance, even going wheel-to-wheel with Verstappen over the final lap in an inspired attempt to snatch seventh from the Dutch driver.

“It’s a risk for more points (racing Max),” said Schumacher. “We all have a good relationship within the drivers community and great to see everybody is healthy after the start.” (Reporting by Steve Keating; Editing by Ken Ferris)

Short but oh so sweet 😊

A quick message from Mick after he scored his first F1 points at Silverstone today 🇬🇧#HaasF1 #BritishGP pic.twitter.com/rcf0GEvNez