Norris: The car’s performing in a reasonable area 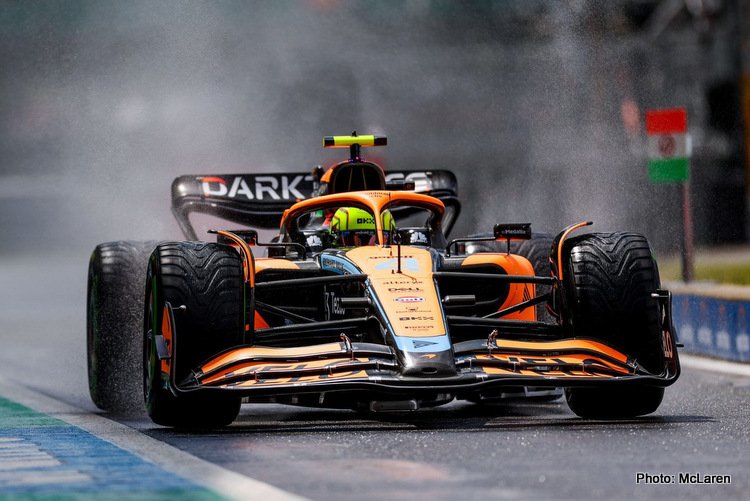 Lando Norris threw his orange “Remember Me Card” into the ring as a 2022 British Grand Prix podium contender after ending the first practice day third fastest on a bittersweet day for McLaren; Daniel Ricciardo was ninth.

While it can be argued that today’s running was something of an anomaly as a wet FP1 tore up any well laid plans for teams to do meaningful testing of upgrades; but the second session did provide a better benchmark.

Thus amid the hype of the Red Bull versus Ferrari battle for supremacy and the stuttering Mercedes renaissance, Norris has signalled his intent by showing that he has all but found that fabled one-second the Silverstone crowd gives British drivers according to Nigel Mansell who tapped into it several times.

Summing up his Friday on home soil, Norris said: “A decent day, very tricky in the wind conditions we have here. It’s strong gusts at high speed, so the car is difficult to drive, changing every lap, it’s inconsistent. But it’s the same for everyone.

From our side, I think the car’s performing in a reasonable area, a little bit better than maybe we were expecting, so hopefully, that can continue. We can make a couple of changes and small improvements in a few areas and continue the pace we had today.”

In the sister car, Ricciardo was only good for the ninth-fastest time on the day, but this did not perturb the Australian who saw the positives despite being almost eight tenths of a second down on Norris’ best effort.

Ricciardo: Being in the top ten is positive and looking where Lando is, is also positive. 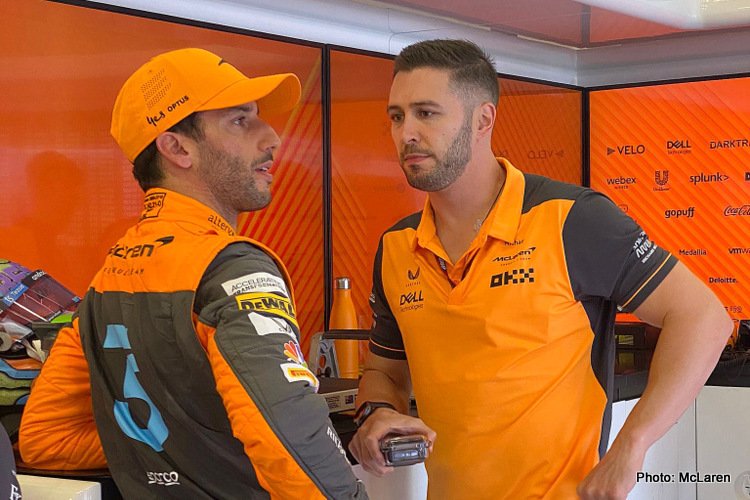 Ricciardo said in the team report: “This morning wasn’t busy, just because of the weather, so didn’t have much running. But then the afternoon session was better, and we got a lot of laps.

“Initially, on the Hards, it started well in terms of feel, and we got up to pace pretty well with that, however, we struggled with the Softs quite a bit. To be in the top ten is positive, and looking where Lando is, is also positive.

“So, I think there’s certainly a lot more to get out of the car. I think we’re in a decent place, we’ll learn a bit from both cars, make a few little different set-up changes and have fun,” concluded Ricciardo.

McLaren’s racing boss Andrea Stella has an eye on the weather ahead of qualifying on Satruday: “The mixed weather conditions today at Silverstone presented us with an opportunity to study the car on both a wet and a dry track, which was useful because the weather is likely to continue in this unsettled vein across the remainder of the weekend.

“It was also quite windy today, which makes the car a little unpredictable and tricky to drive – especially in the high-speed corners. Overall, we’re happy that the car seems to be performing better here than we saw in the last two races.

“We hope to glean as much as we can overnight from the data gathered today, and be as prepared as possible for qualifying and the race,” added Stella.

Last year Norris finished fourth at Silverstone, this year he could well go one better if McLaren can sustain their form into Qualifying and convert that into a strong result, on today’s form a podium is not dreamland for the 22-year-old who makes his 70th F1 start on Sunday.